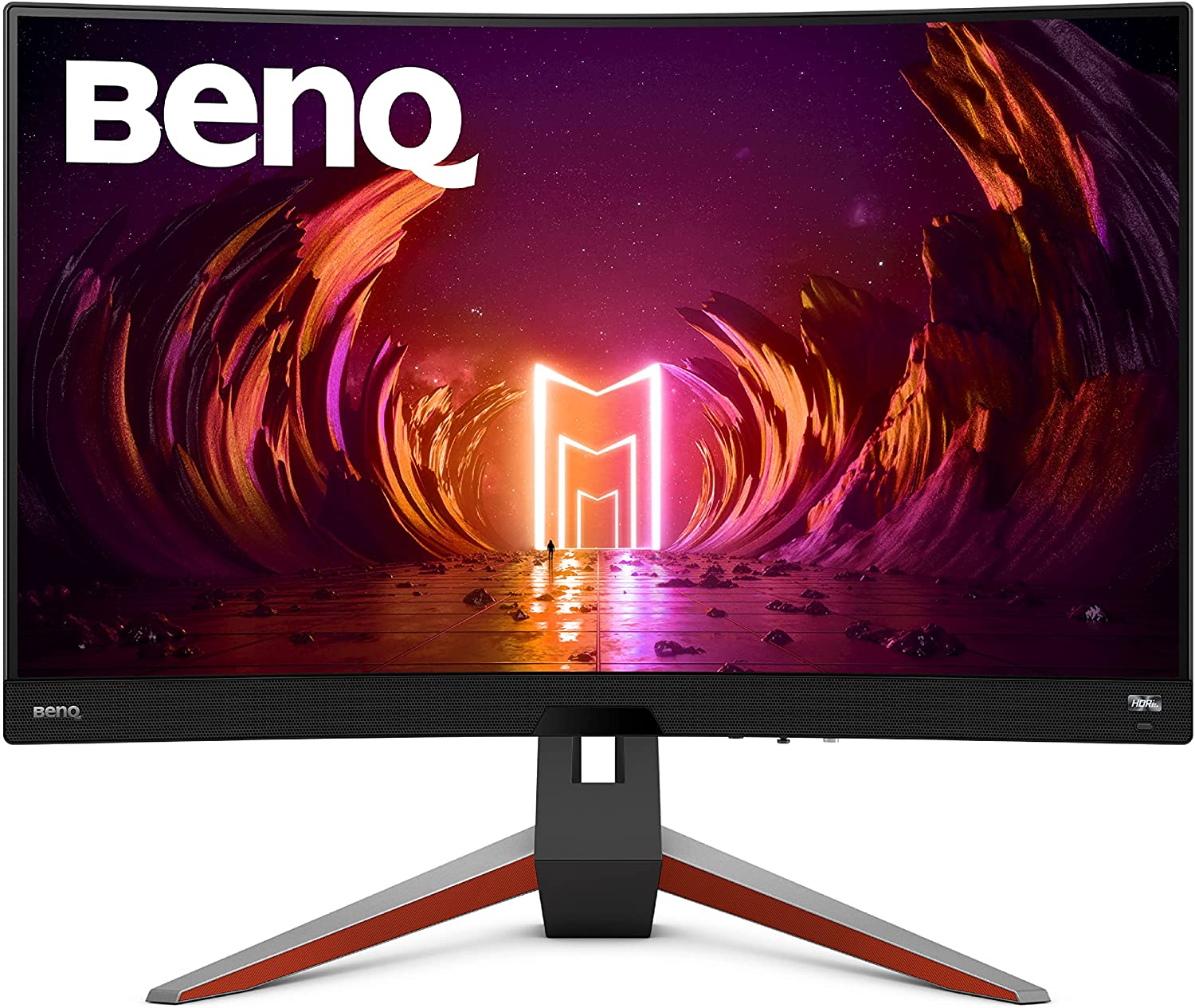 The BenQ Mobiuz EX2710R offers a curved QHD screen with premium features and design for discerning enthusiasts. It’s comparable to affordable options like the Gigabyte G27QC, but we know Mobiuz monitors always have more to offer. Let’s check and see if the BenQ Mobiuz EX2710R’s considerably higher price is worth it versus its cheaper competitors that offer sound performance for the money. 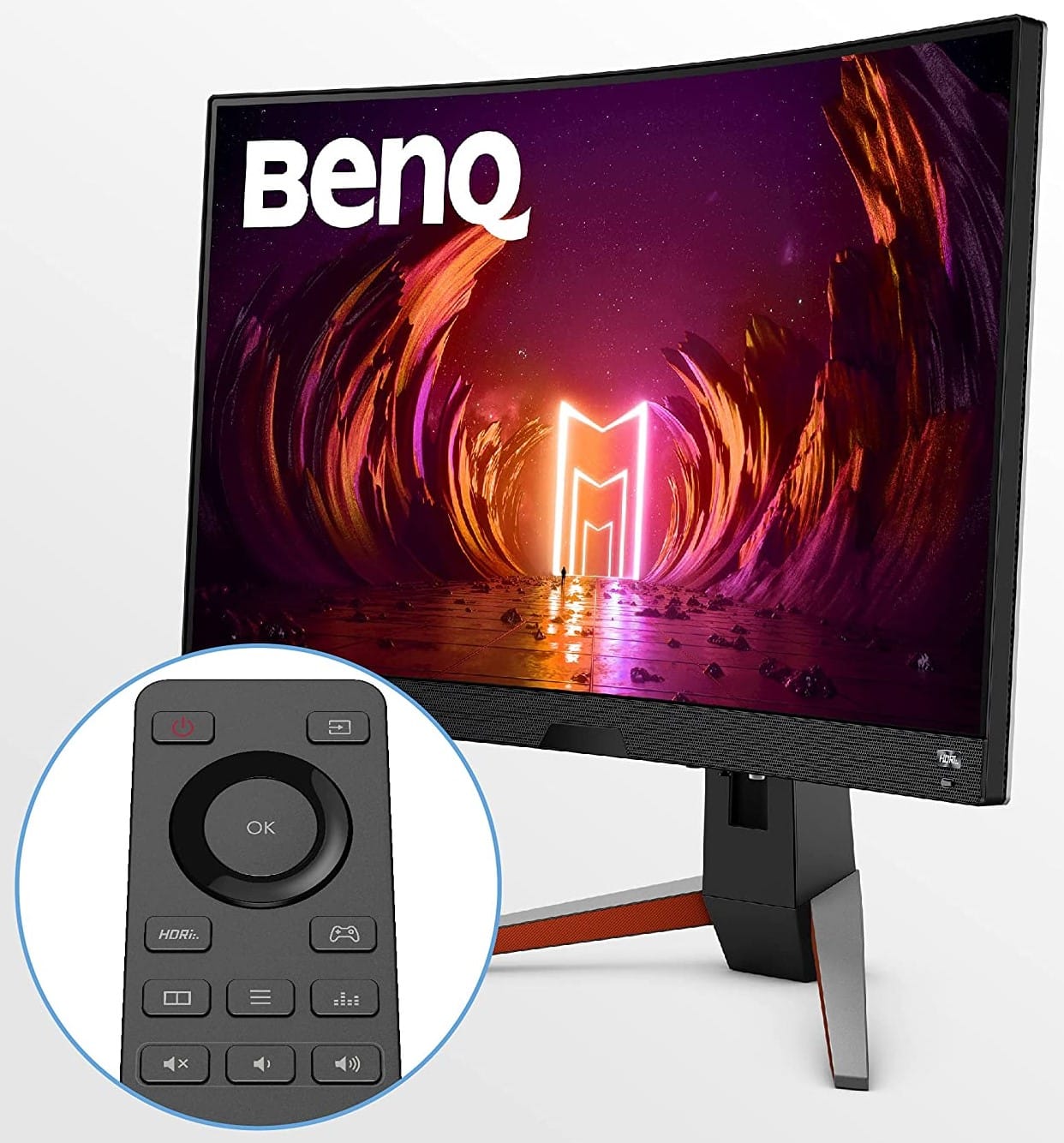 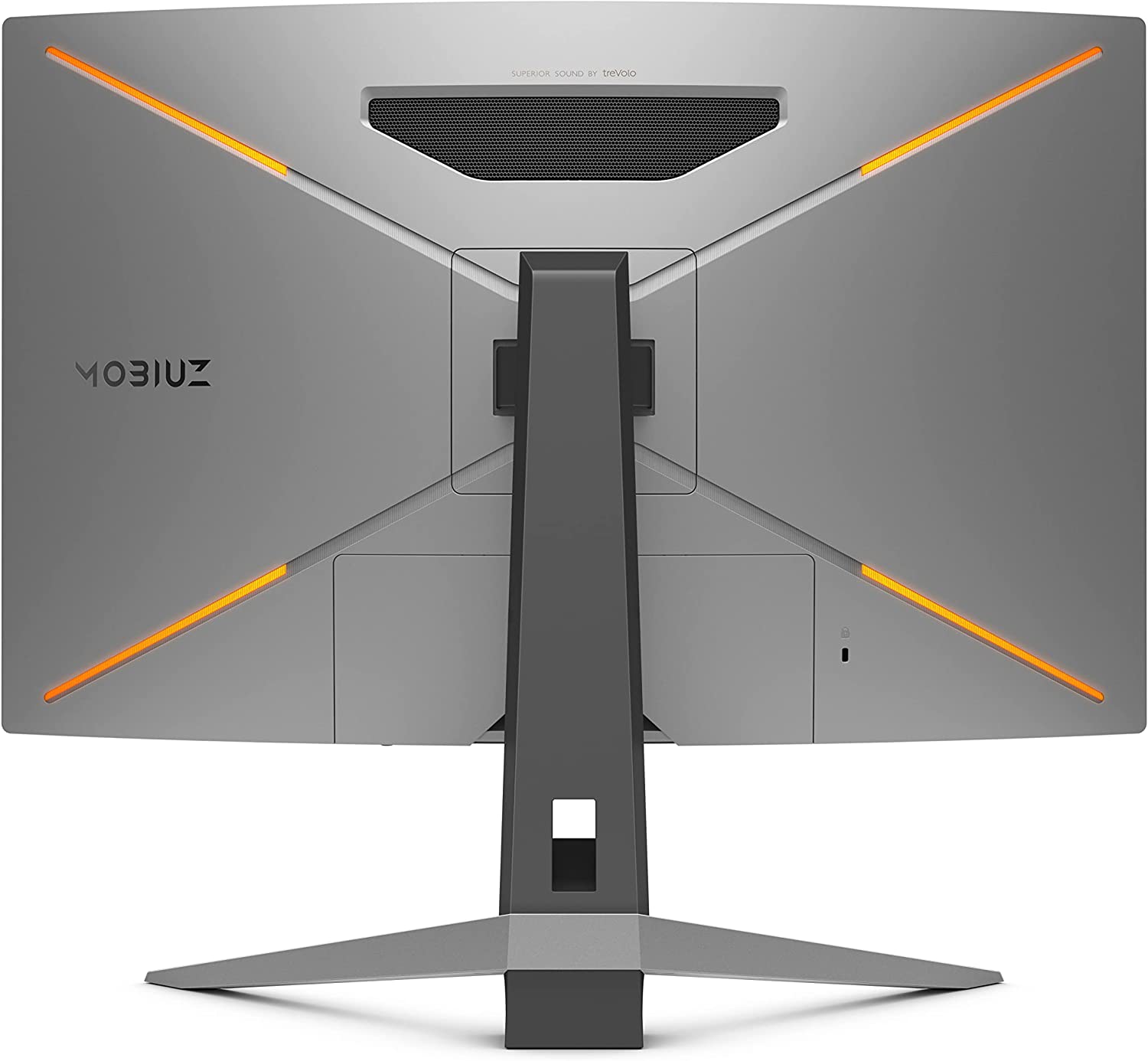 The BenQ Mobiuz EX2710R shares its aesthetics with the EX3210U, except its curved and has a darker shade on the shell. It has a matte black and gray combination instead of the latter’s black and white, and it still has distinct red strips on the legs of the base. The screen is bezel-free on three sides so the screen will look bigger for the user.

27-inch monitors are common nowadays, but they still can become a problem if you have a smaller than the usual desk. However, the ten inches of depth it needs is still more than what other monitors require, so those with shallow desks might need to do some rearranging first. It is not too heavy at 15.7 pounds, so you won’t need to ask for help in setting it up.

Its build quality is worth the price since everything seems refined and durable compared to other offerings. The plastics used are thick and sturdy, so they won’t flex or crack that easily. The monitor feels well reinforced, and its stand is quite stable so it won’t sag or shake unless you hit it accidentally.

The BenQ Mobiuz EX2710R also has RGB lighting like its 4K sibling to complete its premium gaming-grade nature. The strips are arranged in an X position at the back, but its only bright enough to be a bias light if you are gaming at night. The feature also doesn’t work with existing RGB ecosystems, so you can only control it via the OSD.

It is great that you get an OSD joystick with this model, but it also includes a dedicated remote like the flagship option. This combo makes it easy to access the OSD whether you are gaming on a desktop or on a couch. It also has a dedicated HDRi button and a Brightness Intelligence Plus sensor at the bottom bezel for automatic brightness control.

The stand included with the BenQ Mobiuz EX2710R offers tilt, swivel, and height adjustments so you can get a comfortable angle all the time. Pivoting is unnecessary since curved displays aren’t ideal for portrait mode, especially if it has a thick bottom bezel like this model. You can use VESA mounts, but it isn’t necessary unless desk space is an issue.

Its connectivity layout includes DisplayPort 1.4 and two HDMI 2.0 slots, along with a trio of USB 3.0 ports for accessories. We’d love to see extras like USB-C, but its lack of it is still understandable at this price range.

Another special feature of the BenQ Mobiuz EX2710R is its unique treVolo speaker layout that’s composed of 2-watt drivers and a dedicated 5-watt woofer. It sounds considerably better and clearer since it has decent levels of bass. Headsets will be better for immersion, but we’re glad to have a set that’s usable for movies or casual gaming in case it’s too hot to wear cans over your head.

27-inch QHD monitors offer the perfect sweet spot for visibility and sharpness. You get a noticeable upgrade in crispness while playing games and movies, but legibility doesn’t suffer as it does in 4K. This means that it will be comfortable to use for extended periods where smaller and sharper screens can strain the eyes.

The BenQ Mobiuz EX2710R renders 99% sRGB and around 89% DCI-P3 for decent vibrancy that’s in line with the company’s claims. What’s impressive is its deltaE average which is already perfect for gaming and daily use at 2.09. Most users will be happy with the default settings, so only a few typical tweaks like adjusting the backlight will be necessary.

Calibrating the BenQ Mobiuz EX2710R reduced its dE average to 0.91 which is excellent for a VA-based gaming display. Note that you need a colorimeter to achieve this level of improvement, and those gadgets aren’t cheap. Spending the extra won’t be necessary unless you are into color-critical work.

Its backlight reached 295 cd/m2 in SDR and it peaked at 405 cd/m2 when it’s HDR mode is active. Its contrast ratio reached 2105:1 at 70% brightness, but activating its HDR mode seemed to drop it along with the deep black luminance. As such, its HDR feature isn’t always usable so we’ll leave it up to you to determine when it should be utilized.

Panel uniformity for the BenQ Mobiuz EX2710R had some issues due to backlight leaks at the top edge of the screen. The resulting clouding doesn’t show up unless you view dark scenes, but knowing they are there can be annoying. However, this isn’t permanent on every monitor since there are tolerances at play, so it’s possible to get a better unit.

Its pixel response time is comparable to other VA panels so it’s acceptable for fast-paced play. Some smudges and ghosting can still appear, but it mostly comes out in fast and contrasting transitions. Using the monitor’s trace-free setting moderately will help with this limitation, although it cannot eliminate the trails and smudges completely without adding overshoot at the maximum level.

The BenQ Mobiuz EX2710R is compatible with both FreeSync and G-Sync so you will always have VRR no matter which GPU you use. This duality is handy now because GPUs are difficult to find on shelves and quite expensive if they are. Input lag sits at 4ms at 165Hz, so it is fast and responsive enough for gaming.

Thoughts on the BenQ Mobiuz EX2710R

The BenQ Mobiuz EX2710R is a well-designed gaming monitor with enjoyable features and an attractive aesthetic. The screen’s default performance is superb so most users can enjoy their new gaming display right away. Its also incredibly well-built so it feels like you got your money’s worth once you unbox it.

It’s not perfect, but we think that your gaming experience will be enjoyable overall. We’d love to see more functional options like USB-C over the aesthetic add-ons, but it is not a deal-breaker considering what the monitor was designed for. The BenQ Mobiuz EX2710R is one of the best 1440p monitors you can buy now even if not the cheapest option in the market.