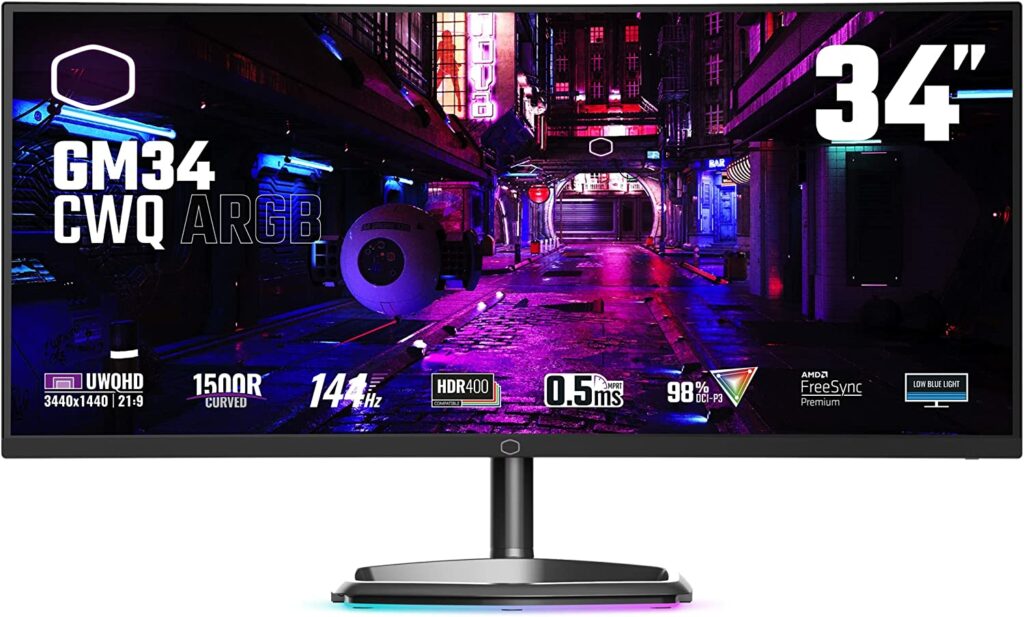 The Cooler Master GM34-CWQA is an upgraded 144Hz ultrawide that’s intended to upgrade your gaming and PC building experience. It’s the next evolution of the GM34-CW we reviewed earlier, but the panel specs are mostly the same. Let’s take a closer look at the Cooler Master GM34-CWQ to see how it performs and judge for ourselves if it’s worth the price bump. 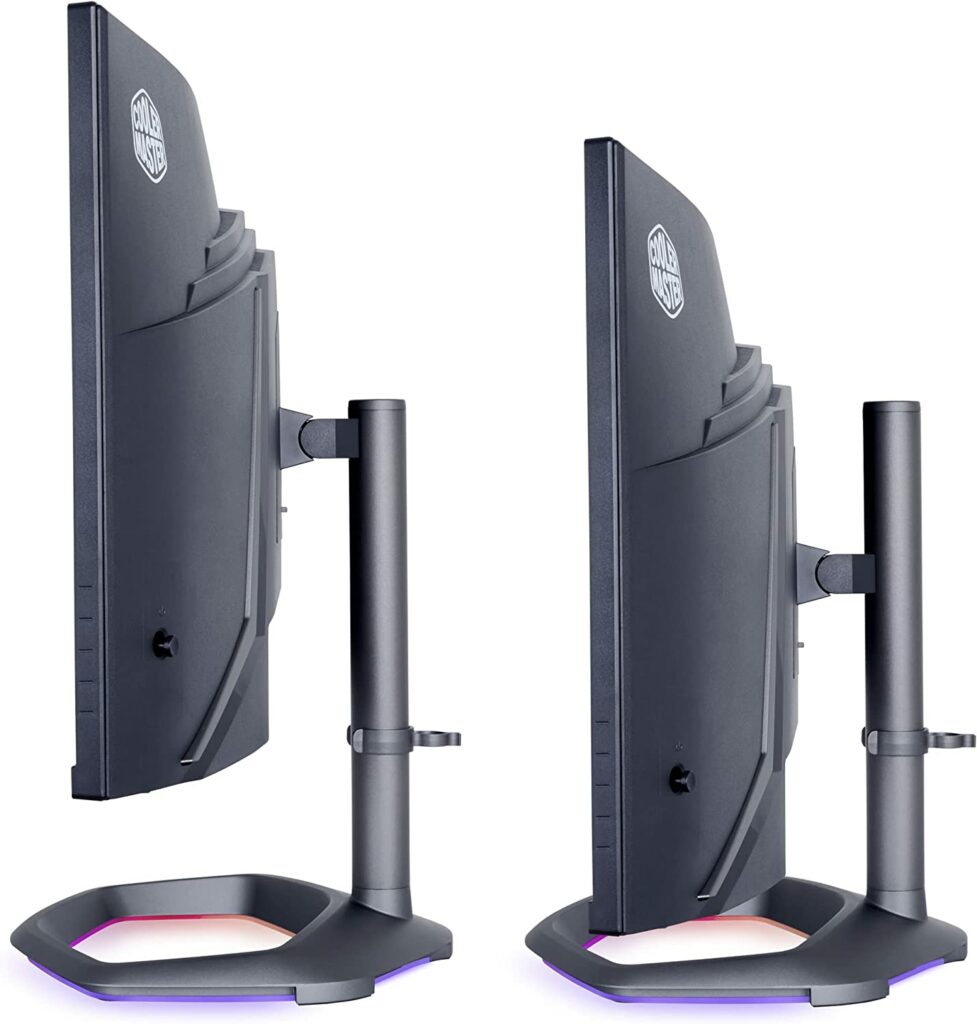 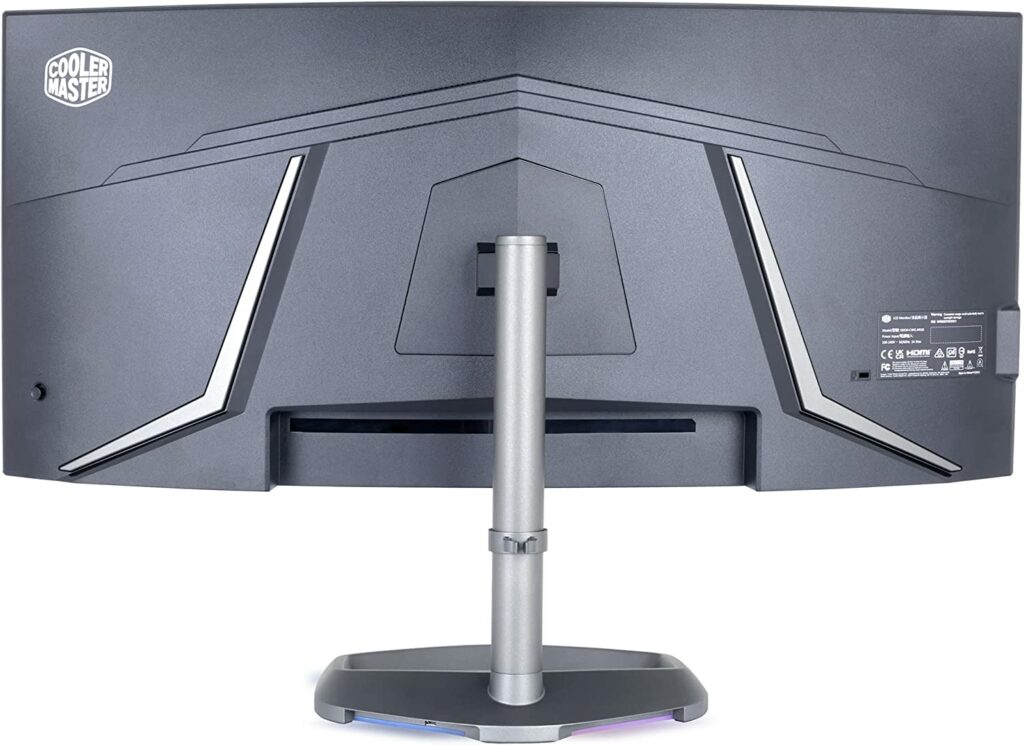 The Cooler Master GM34-CWQ retains most of its predecessor’s aesthetics, but it does have a few notable upgrades. The monitor has a matte black chassis that’s mated to a gunmetal stand for that clean yet modern look. The display is bezel-free on three sides, but you will still see inner borders when it’s in use.

This model is an ultrawide display, so you might want to scope out what desk space you have left for it before buying one. It’s wide enough to displace big desktop speakers and it needs almost 11 inches of depth from your computer table. It’s not too heavy, but extra care is still necessary while setting it up or moving it around.

Its build quality is great thanks to durable plastics and a solid metal stand that keeps the whole thing balanced. We didn’t notice any cosmetic defects like uneven seams or sharp edges when the product was unboxed. It also doesn’t wobble or sag despite its size so gamers won’t be disturbed while focusing on their favorite titles. 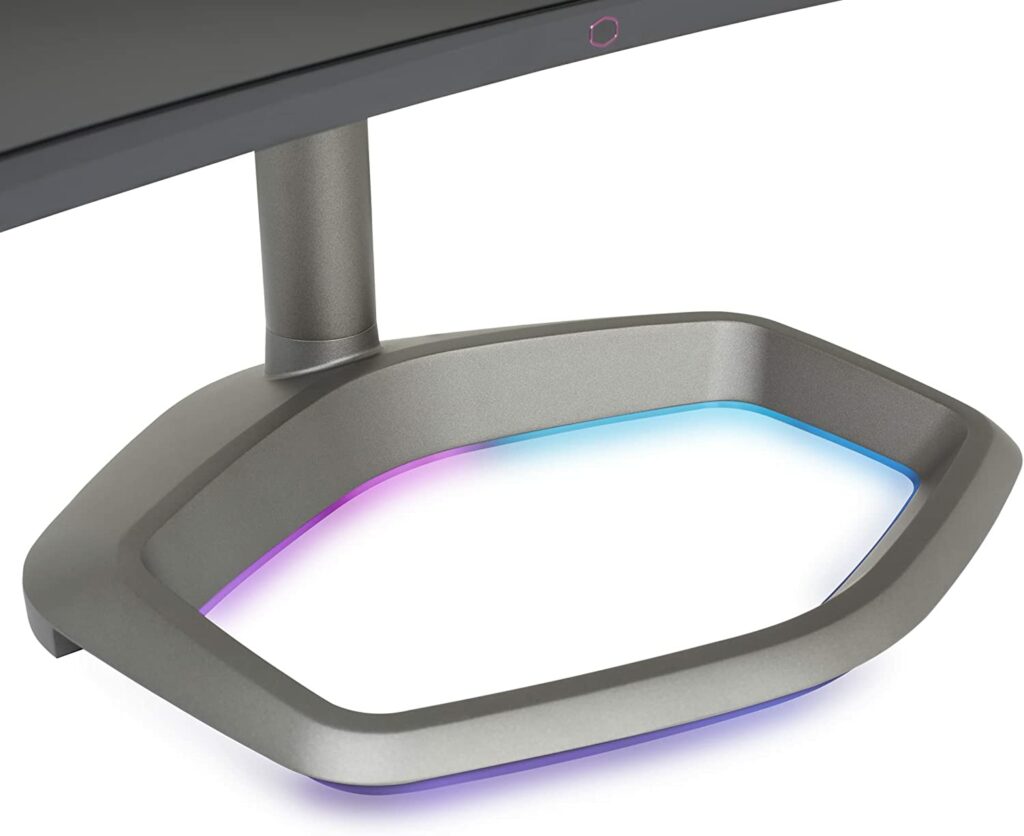 The standout feature of the Cooler Master GM34-CWQ is its ARGB lighting located under the bottom of its hexagon-shaped base. It’s a nice feature to have if you have other Cooler Master ARGB-equipped gear since you can sync and control the lighting via the brand’s MasterPlus+ app. Some may find it distracting, but it’s a nice add-on to showcase custom or high-end builds.

You will also find an OSD joystick that lets you conveniently access its settings and features. The gadget is located at the lower right-hand side of the monitor’s back panel, so it’s a little more difficult to access for some. It would be better if it was situated in the middle of the bottom bezel, but that’s a minor issue that many won’t even complain about.

Another upgrade this new variant received is on its connectivity layout which includes better ports for improved functionality and flexibility. It has the standard DisplayPort 1.4 slot and it got boosted to two HDMI 2.0 ports, plus a USB-C slot with DP Alt Mode and 65 Watts of charging power. You also get two USB 3.0 ports and a 3.5mm jack so your main peripherals can pass through the device.

You will also find a pair of 5-watt speakers with this monitor, unlike its predecessor which had a weaker 2-watt set. They sound louder and a bit clear, but it would still be better if you use desktop speakers or gaming headsets with this monitor. The latter will help you focus, plus it is better tuned to enhance the immersive properties of the monitor and your favorite games.

The Cooler Master GM34-CWQ boasts a 34-inch Quantum Dot VA panel with a 3440 x 1440 resolution, a 144Hz refresh rate, and an improved 0.5ms MPRT response time. It has a 400 cd/m2 backlight and a higher 4000:1 contrast unlike most of the VA monitors on the market. This model is HDR 400-compliant, but we all know how limited that is since it doesn’t involve local dimming.

1440p ultrawides like this model are fantastic picks for both gamers and productivity users since they are more common and cheaper than ever. The large screen gives you plenty of room to maneuver, but it is still sharp and detailed enough to be considered an upgrade over older models. However, you will need a more potent GPU if you want to keep framerates high.

The Cooler Master GM34-CWQ rendered more than 100% sRGB and around 95% DCI-P3 thanks to its Quantum Dot treatment. It also looks like it’s pre-calibrated since the deltaE average is only at 1.31 so it’s already balanced out of the box. Most users will be able to use and enjoy it right away without the need to tune its color temperature.

Calibrating it with a colorimeter improved the deltaE average to 0.99 which is better, but not worth the trouble for most users. It aligns the screen’s performance with prosumer products and their potential, but it is not necessary for gaming. Buying a colorimeter will only be practical for those who are into color-critical work.

Its backlight reached 425 cd/m2 at 100% which is plenty even if you are using the monitor in a well-lit room. Its contrast ratio peaked at 3677:1 at 50% brightness, so it’s capable of deep blacks and superb dark scenes. It’s not true HDR-capable and that ratio is a bit lower than the manufacturer’s claim, but it’s still a very good result overall.

Panel uniformity for the Cooler Master GM34-CWQ sample had some issues near the top and bottom corners of the screen. they showed up as clouding in dark or all-black scenes, but full-color images will conceal them. Note that this isn’t permanent on every monitor since there are tolerances in play, so it is possible to get a better unit.

It’s still prone to blurring like most VA panels and its overdrive doesn’t perform that well. Maxing it out will add visible overshoot, so you can only use Normal or Advanced which has lesser inverse ghosting. It is not a big deal for most gamers, but those who play competitively might want to consider a fast IPS variant instead.

The Cooler Master GM34-CWQ is compatible with both FreeSync and G-Sync so you don’t have to worry about stuttering and tearing while playing demanding titles. This is a must-have feature for monitors now so the user doesn’t get stuck with one GPU brand. Input lag sits at 5ms at 144Hz so it is still fast and responsive enough for competitive gaming.

Thoughts on the Cooler Master GM34-CWQ

The Cooler Master GM34-CWQ is a great choice if you want a vibrant ultrawide with plenty of contrast and personality. Its Quantum Dot VA panel provides fantastic vibrancy and image quality, so we know most will enjoy it. It’s also designed quite well, although you need Cooler Master gear to go with it if you want to utilize its ARGB feature.

Our biggest issue with the Cooler Master GM34-CWQ apart from its limited HDR performance is its considerably higher price tag. Alternatives like the Gigabyte G34WQC are more or less $200 cheaper at the time of this review, so it’s not a practical choice unless you really want its ARGB feature. It’s also prone to blurring like many VA panels, although it still provides great gaming performance overall.

Search
NEW
POPULAR
You are here: Home / Reviews / Cooler Master GM34-CWQ Review – 144Hz High-Contrast Ultrawide Gaming Monitor with ARGB
This website uses cookies to improve your experience. We'll assume you're ok with this, but you can opt-out if you wish.Accept Read More
Privacy & Cookies Policy