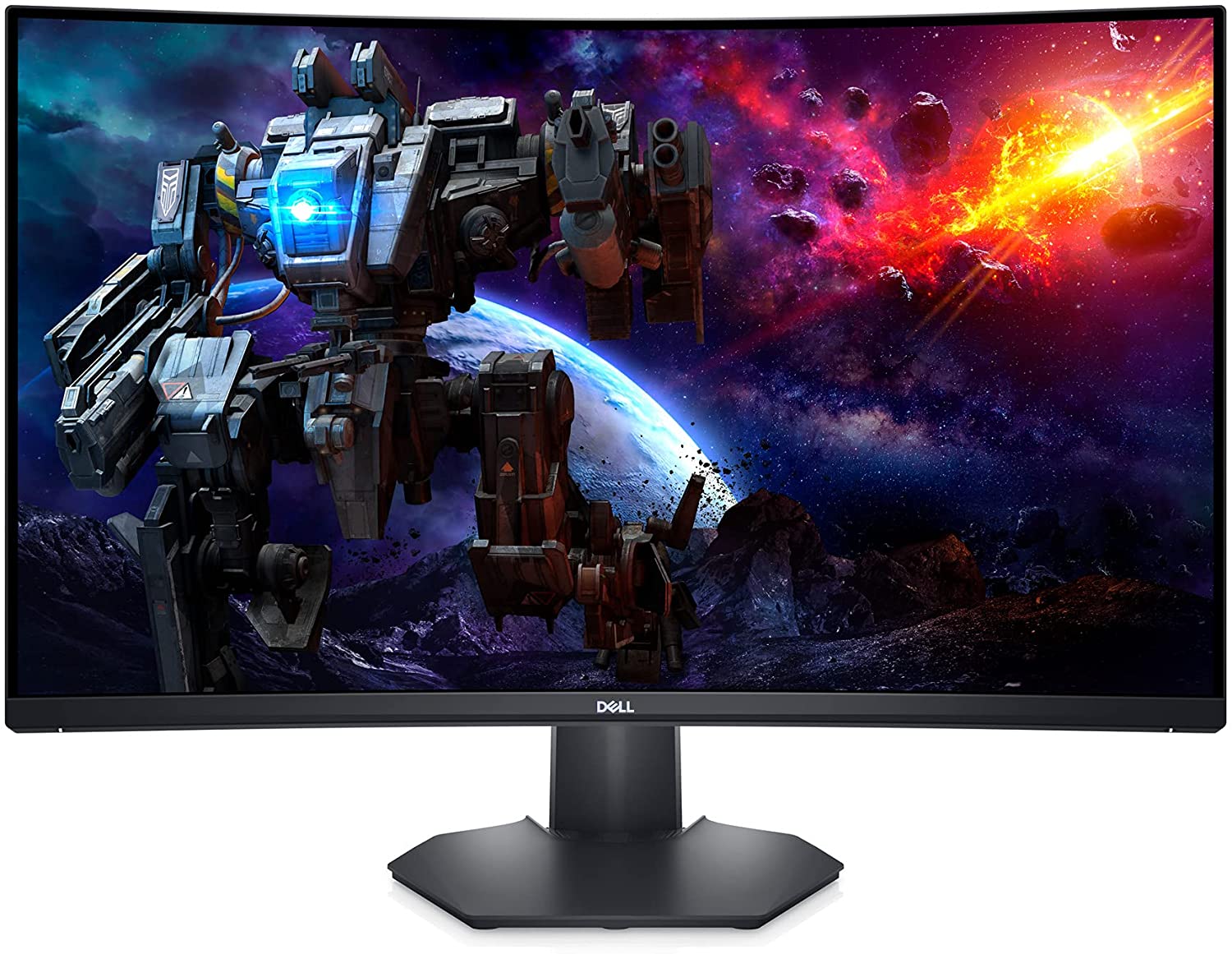 The Dell S3222HG provides excellent value thanks to its large and curved 1080p screen that’s ideal for both PC and console gaming. The downside is it’s still 1080p, but that’s it is still a popular format for gamers, especially those who are into E-Sports. Let’s see if the Dell S3222HG should be your next cross-platform gaming monitor based on its performance. 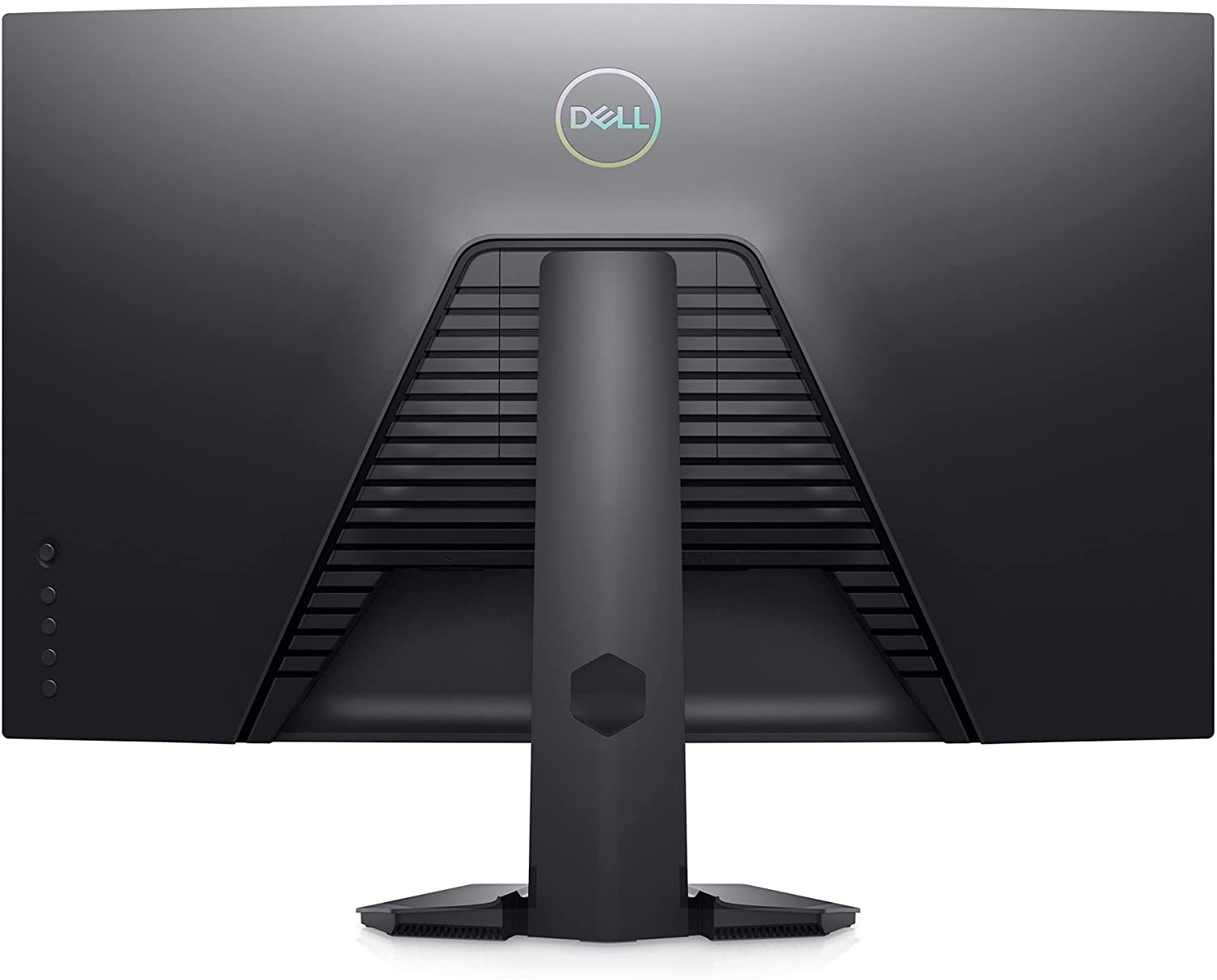 The Dell S3222HG looks like a discrete variant except for some subtle cues like its polygon-shaped base and the vent design at the back. It has a matte black aesthetic, so it won’t clash with your setups even if it has a color theme. The display barely has any bezels, but inner borders are still visible if you look close enough.

You have to consider the size of the Dell S3222HG since it’s bigger than most office or school displays. It’s more than two feet wide so it can interfere with large desktop speakers or other monitors if you have any on your desk. It is quite heavy so it might be wise to ask for an extra pair of hands while setting up to avoid accidents.

Build quality is great even if the monitor has some physical limitations since it is a budget model. Most tilt-limited stands are often prone to wobbling, but this is not the case since the one included is beefy and stable. The plastic panels are finished nicely, so there are no cosmetic defects or uneven gaps on the device’s seams.

The Dell S3222HG has a joystick and some hotkeys for its OSD and its specific features. The layout is at the back but it’s very easy to use even if you don’t have a direct line of sight to it. Other monitors have buttons that are a minor inconvenience, but it is a bit more confusing and time-consuming especially if you calibrate your screen often.

The stand included with the package only offers tilt, although it’s big and beefy like the ergonomic variants. The good thing about that is it is beefy and steady so you don’t have to worry about wobbling or sagging.  You can use VESA mounts if the monitor sits too low or more flexibility is necessary, but that will add more cost to your upgrade.

One of the aspects that took a hit to lower the price and make this model a budget variant is its connectivity layout. You only get DisplayPort 1.2 and two HDMI 2.0 slots, but that’s all you will ever need for daily use. Other monitors have USB ports and other valuable extras, but that’s understandable for a 32-inch monitor that costs under $300.

You also don’t get speakers with the Dell S3222HG, but that’s understandable since the price is very low. Curved monitors like this are also better enjoyed with headphones to better enjoy their immersive qualities. Built-ins have more uses now, but omitting them is understandable in this case.

The Dell S3222HG boasts a 32-inch curved VA panel with a 1920 x 1080 resolution, a 165Hz refresh rate, and a 4ms response time. The backlight has a 350 cd/m2 maximum while the contrast ratio is listed at 3000:1 like most VA panels. This model has a 1800r curvature which isn’t too steep, so the immersive property is there without too much imaging distortion.

1080p isn’t your best pick if you want a large monitor like this since the pixel density is loose so images can look pixelated. The trick is to sit at a good distance to avoid this issue, and that’s quite doable if you are using this display with a console. The good news is that you can enjoy clear visibility and legibility, so browsing or sniping won’t strain your eyes.

The Dell S3222HG renders over 100% sRGB and around 90% DCI-P3 for excellent vibrancy in games and movies. its default accuracy is great as well since the deltaE average is at 2.53 which isn’t perfect, but sufficient for gaming and general use. Most users won’t see the difference unless they have a calibrated display next to this one.

Calibrating it did not yield considerable improvements since the deltaE only lowered to 1.66 which is better, but not worth the cost of a colorimeter. It is still usable for content creation, but professionals would want something more sophisticated. The default setting is already great for its intended purpose, so the only setting most need to touch would be the brightness level.

Its backlight peaked at 353 cd/m2 while its contrast ratio reached as much as 3378:1 at 60% brightness. The monitor is capable of deep blacks and convincing dark scenes, unlike IPS or TN panels which look washed out in this regard. This also adds to the immersive quality of the device, but competitive gamers might want better visibility in dark scenes and avoid black crush which is common here.

The Dell S3222HG’s panel uniformity since there are backlight leaks on the top and bottom edges of the screen. This is common on curved monitors, but it is not as widespread like it is on IPS panels. Note that not all curved VA monitors have this flaw due to tolerances, so there are better and worse units out there.

Its pixel response time isn’t particularly agile so you will deal with some blurring and smudges in contrasting or extra fast transitions. Its overdrive is quite effective, but using the monitor’s MPRT or backlight strobing mode will add some artifacts and dizzying effects for some. Fast IPS options are better in this regard, but not many of them are cheap and curved.

The Dell S3222HG is compatible with both FreeSync and G-Sync so you don’t have to worry about losing VRR functionality. This is crucial nowadays since GPUs aren’t always available and their prices have more or less doubled due to the high demand. Input lag sits at 4ms at 165Hz so it’s usable for competitive games without having to worry about delays.

Thoughts on the Dell S3222HG

The Dell S3222HG is a decent choice if you want a large screen for multi-platform gaming. Its resolution is its limiting factor, but that also means that it’s easy to run games on PC and consoles at high framerates. It’s well-designed with great image quality for the price even if you don’t take the time to calibrate it.

However, it is a budget model so it lacks a few creature comforts that you can enjoy or utilize if you choose to spend a bit more. Our main peeve in this regard is its lack of adjustability which can turn off potential buyers. It’s a good pick for those who game on all platforms and it offers incredible value at its current price point.

Search
NEW
POPULAR
You are here: Home / Reviews / Dell S3222HG Review – Affordable 32-Inch Curved Gaming Monitor
This website uses cookies to improve your experience. We'll assume you're ok with this, but you can opt-out if you wish.Accept Read More
Privacy & Cookies Policy