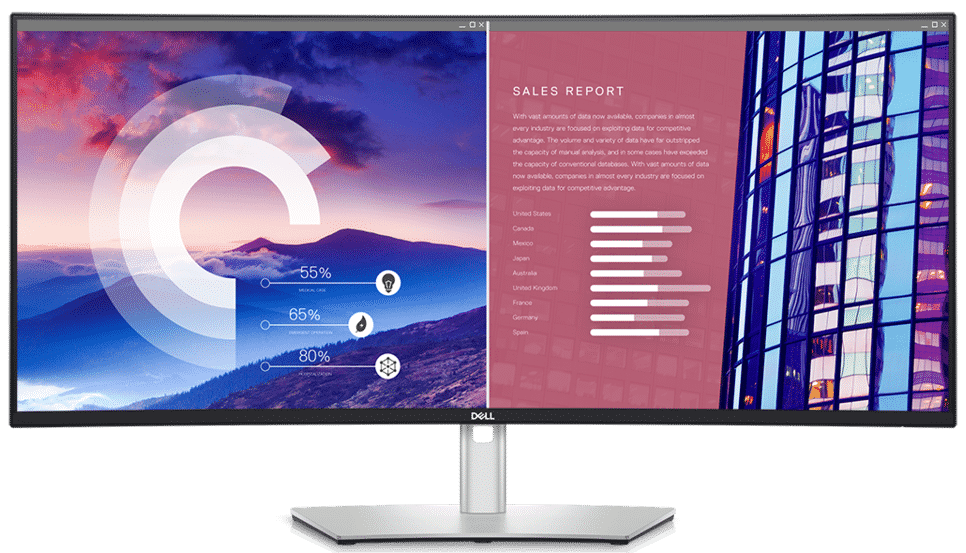 The Dell U3821DW offers lots of screen real estate and vibrant color that’s perfect for multitasking and streamlining your workflow. Its also been upgraded with better connectivity and wide gamut coverage to cater to professionals that need rich colors and modernized flexibility. However, you have to pay a high price for the Dell U3821DW, so let’s check it out if it is worth the premium cost. 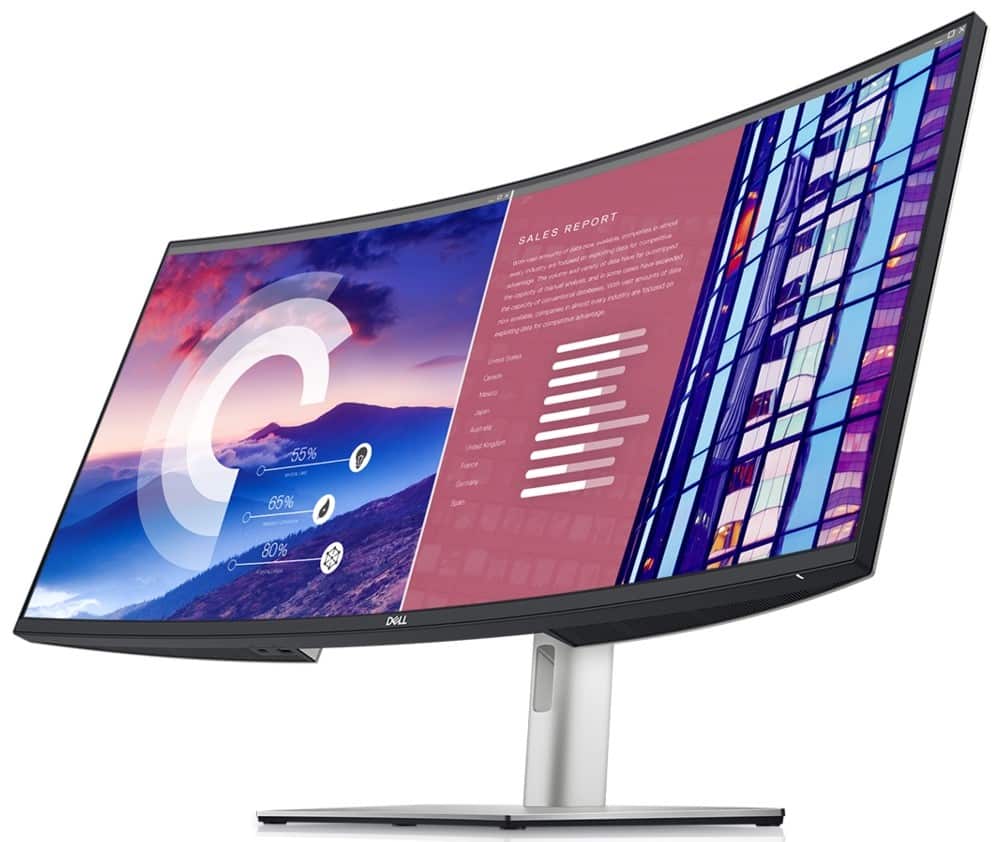 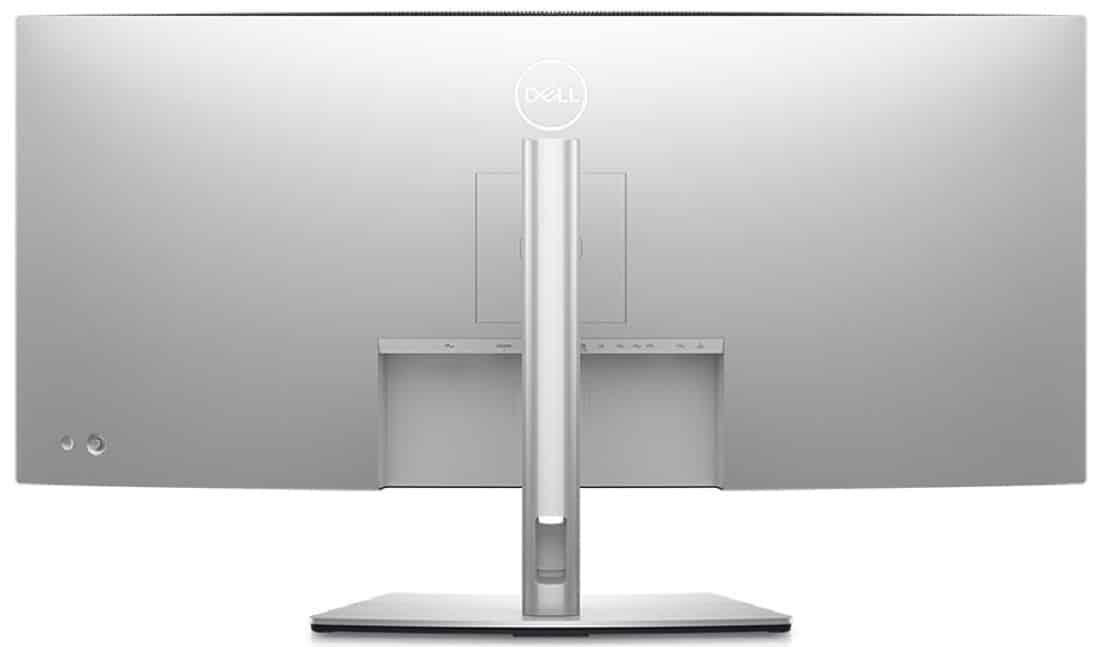 The Dell U3821DW is dressed for business like most monitors, so it doesn’t look tacky or too striking for any environment or setup. The monitor has a matte black chassis that’s complemented by a silver shell and stand that denotes Dell’s signature aesthetic. The display is bezel-free on three sides so users can appreciate the massive display with fewer distractions. 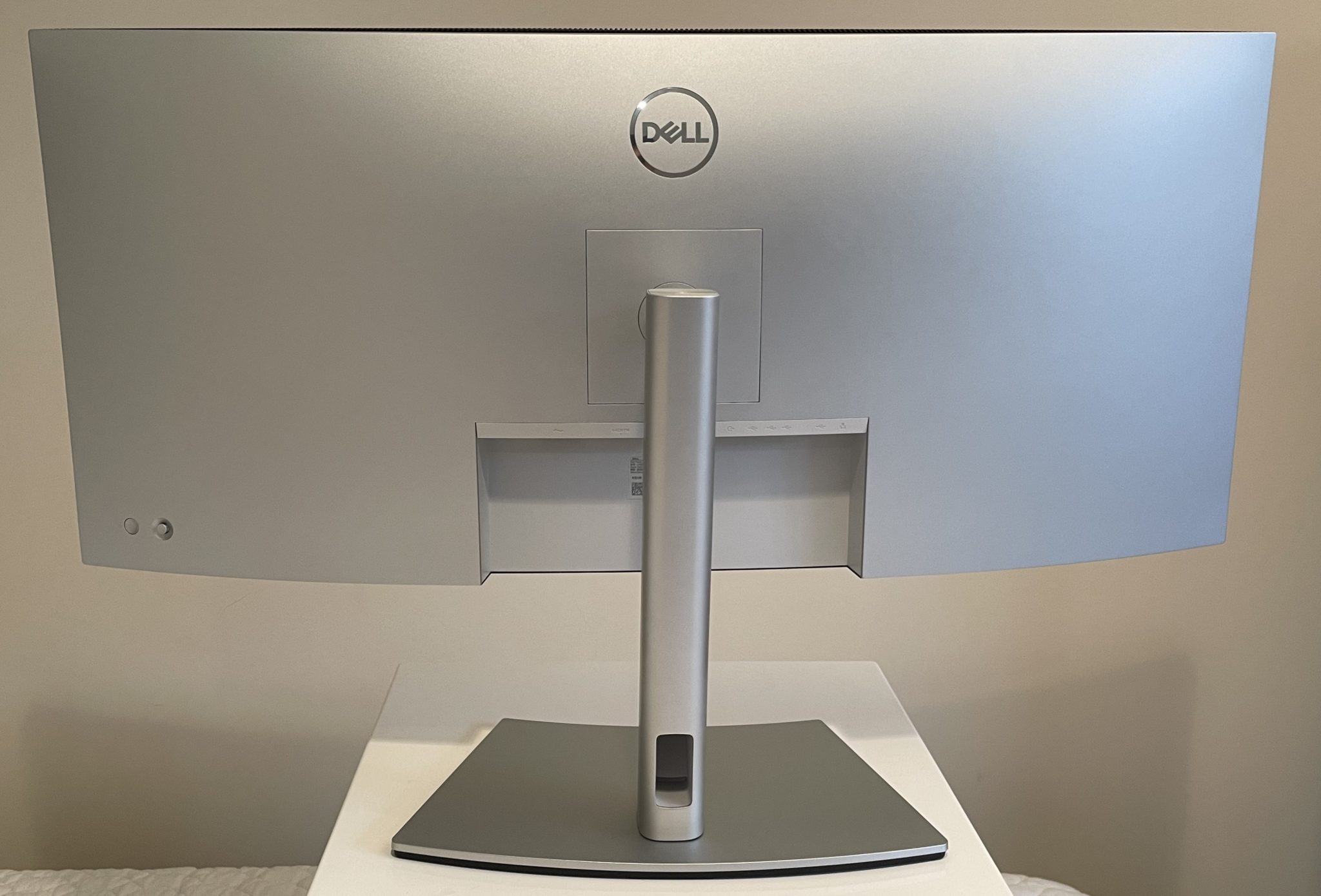 The first consideration you have to think about before getting the Dell U3821DW is your desk space and how much of it is left after your other peripherals. It’s a massive monitor, so users with bookshelf speakers or other large desktop gear might find some difficulty. It is not as heavy as it looks at 19.4 pounds, but it is not easy to move the monitor around because of its sheer size.

Build quality for the Dell U3821DW is fantastic since there are no cosmetic defects or any signs of weaknesses on its parts. The included stand doesn’t wobble and it is able to hold up the view angle you’ve set almost permanently. One of the things we love about Dell is that they pretty much guarantee excellent craftsmanship on all their products, especially their premium models.

The Dell U3821DW includes an OSD joystick, remappable shortcut keys, and the brand’s Display Manager app to help give you easy access to its capabilities. Previous models only had buttons for the OSD which were clunky and at times, confusing for regular users. The monitor has a lot of useful features and it is IT management-friendly, so it is invaluable to have these tools at your disposal.

The Dell U3821DW’s stand offers tilt, swivel, and height adjustments so you can always get a comfortable view of the screen. You can’t pivot the monitor, but that’s ok since it’s impractical to use a 38-inch curved ultrawide in portrait mode anyway. You can swap this part with a VESA mount, but that’s only necessary for saving space since the stock part is good enough for most setups.

One of the best aspects of the Dell U3821DW is its connectivity which includes an array of standards to cater to your every need. The panel at the rear includes DisplayPort 1.4 and two HDMI 2.0 slots, along with a 90-watt USB-C port that supports DP 1.4 Alt Mode. You also get four USB 3.2 receptacles and an RJ45 port for your accessories and IT management.

The monitor even has an accessible hub at the bottom bezel which includes another USB 3.2 port and a USB-C 3.2 slot for faster transfers. You need to use the USB-C slot at the back for single cable operation with USB-C laptops like MacBooks, but that’s a minor inconvenience in our opinion.

The Dell U3821DW also packs a pair of powerful 9-watt speakers in the chassis so you can let go of desktop sets for daily use. The built-ins can get quite loud, but they can sound distorted if the volume is too high. They pack just enough punch for background music and some videos, but most will still look to headsets or bookshelf speakers for better quality and immersion.

The Dell U3821DW boasts a 38-inch 2300r IPS panel with a 3840 x 2160 resolution, a 60Hz refresh rate, and a 5ms response time. The backlight has a 300 cd/m2 maximum output, while the contrast ratio is listed at 1000:1 like most IPS panels. This model isn’t advertised for HDR imagery, but it does have extended gamut coverages that will come in handy for editing work. 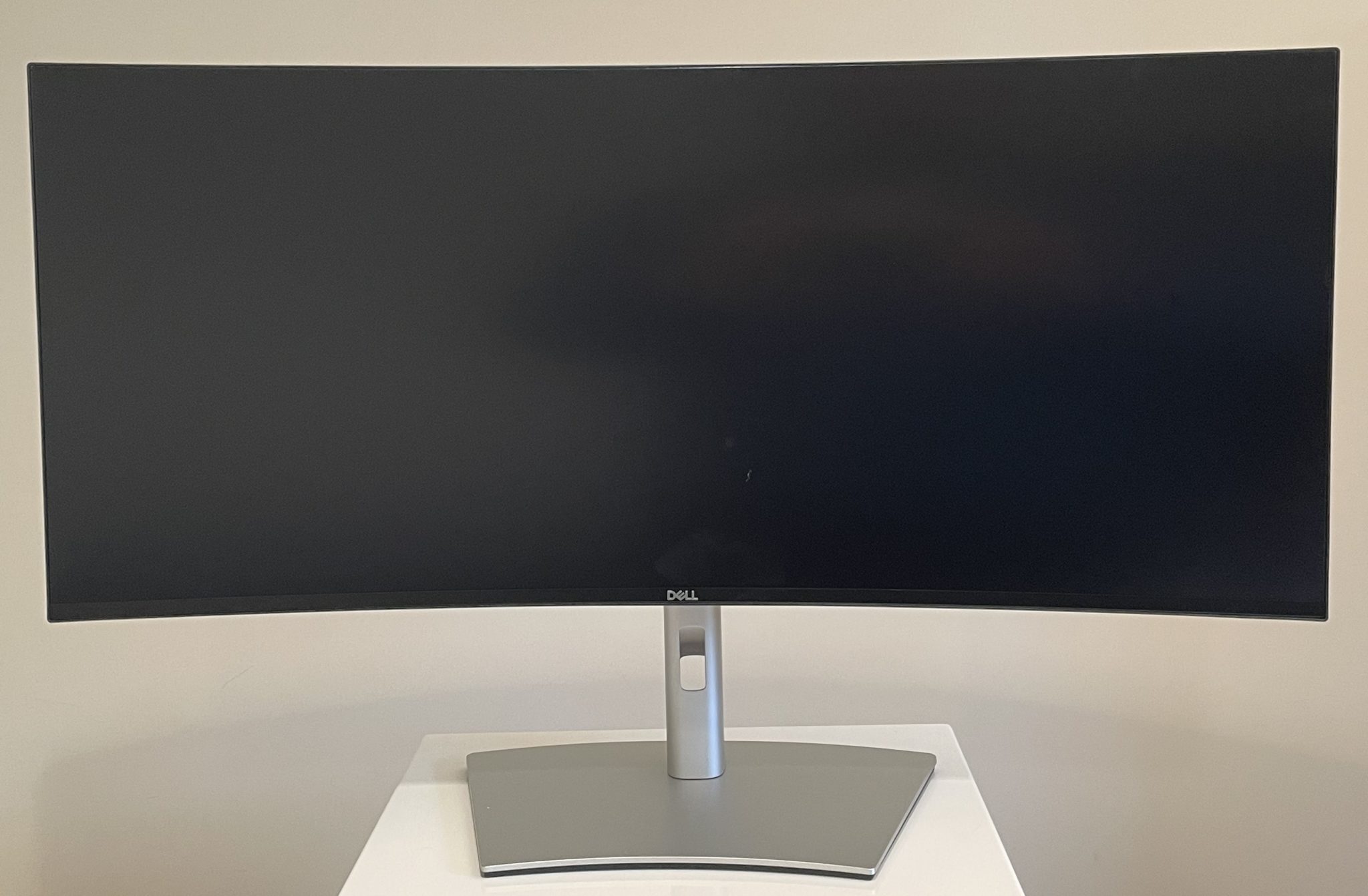 3840 x 1600 provides a lot of room for your workflow and it’s also great for immersive gaming if it weren’t for the limited refresh rate. The screen doesn’t look as sharp as a 4K display, but it also has a higher pixel count and you won’t have to squint while reading small-font text. Games, on the other hand, will need a powerful GPU but you only have 60Hz to fill so you won’t need the top-end models. 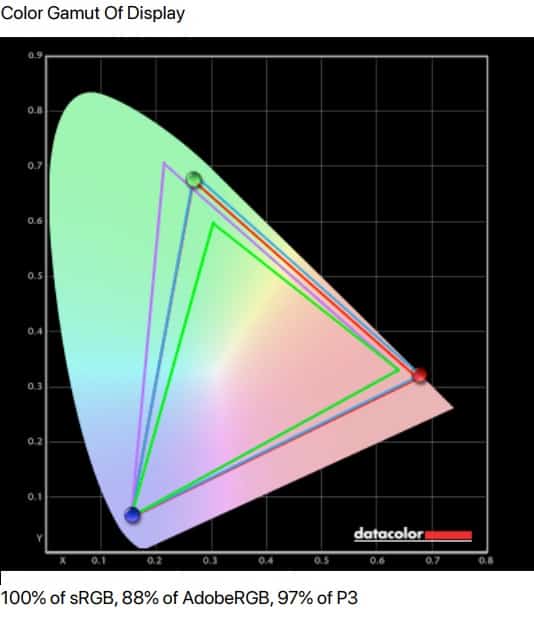 The Dell U3821DW is capable of pumping out superb vibrancy thanks to its more than 100% sRGB, 88% Adobe RGB, and 97% DCI-P3 coverages. The problem is with the color accuracy with some colors reaching as much as DeltaE 4.8. The image looks fine for daily use, but those who delve into color-critical work should calibrate this monitor.

Calibrating the Dell U3821DW is beneficial since the deltaE average is reduced to 0.76 which is excellent for a mixed-use model. Most users will be happy with a few tweaks, but those who need a reliable monitor for jobs will do well to invest in something like the SpyderX Elite or anything similar. It is also worth noting that these color averages vary between every unit due to the nature of panel technology.

The Dell U3821DW’s backlight reached 296 cd/m2 which is plenty for daily use, but its contrast is limited to 800:1 at 60% brightness. The monitor isn’t good at fighting glare and black or dark images can look grayish when viewed in the dark. This performance is common with many IPS panels, but some like LG’s Nano IPS models have shown better results. 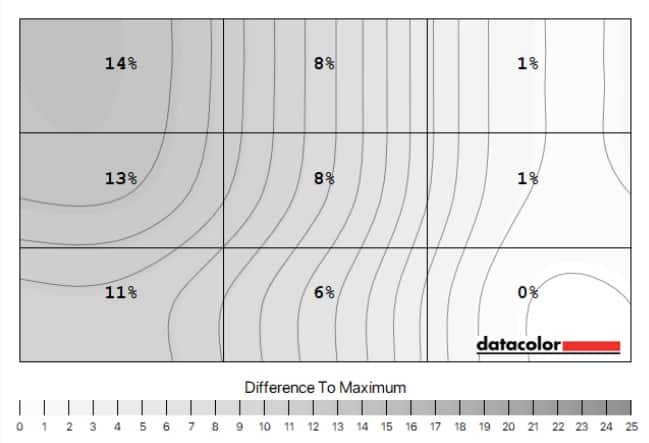 Panel uniformity for the Dell U3821DW sample could be better since the left part of the extra wide screen looks slightly dimmer in some instances. Color shifts and loss of contrast aren’t noticeable, but dark images can show the variance. This aspect varies wildly between every unit, so there are better ones out there.

The Dell U3821DW’s pixel response time is decent for a productivity monitor provided that you use the Fast setting in its overdrive. Doing so cleans up most of the visible persistence and smudges, but you do get a little overshoot in exchange. it won’t be an issue for casual games, but those who play action games like Cyberpunk 2077 might notice.

The Dell U3821DW doesn’t support FreeSync, so naturally, G-Sync compatibility is also out of the window. FreeSync is quite common on most monitors, but it’s common practice for Dell not to include it on their productivity or prosumer monitors. Input lag sits at 15ms which is higher than most monitors, but delays are still mostly unnoticeable even while gaming.

Thoughts on the Dell U3821DW

The Dell U3821DW is a great option for professionals and business users who want a large, vibrant screen with superb functionality. the IPS panel is capable of impressive colors, but you need to tweak or calibrate it with a colorimeter to make the most out of it. The robust design with a wide array of connectivity features is a must-have characteristic to enable the monitor to handle complex tasks and requirements in today’s market.

However, apart from being expensive, the Dell U3821DW doesn’t present the same level of color accuracy out of the box compared to other models in the same class. Products like the Dell U2720Q and even the older U3818DW showed better imaging performance when measured with a colorimeter. It’s an excellent productivity monitor, but we can only recommend it for editors and creators if they have access to a colorimeter.

Search
You are here: Home / Reviews / Dell U3821DW Review – 38-Inch Ultrawide Productivity Monitor with USB-C Hub
This website uses cookies to improve your experience. We'll assume you're ok with this, but you can opt-out if you wish.Accept Read More
Privacy & Cookies Policy