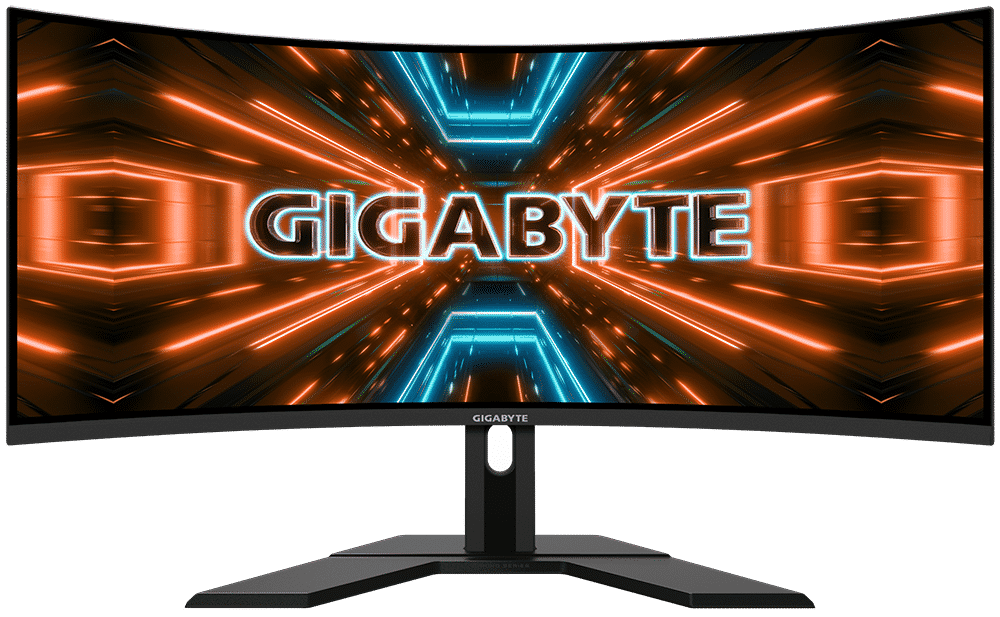 The Gigabyte G34WQCA offers an eye-popping 144Hz 1440p ultrawide screen that’s perfect for all types of games and productivity. It’s a refreshed version of the G34WQC which we loved because of the tremendous value and superb performance it brought to the table. Let’s see if the Gigabyte G34WQCA is indeed an upgrade or is it all just for looks. 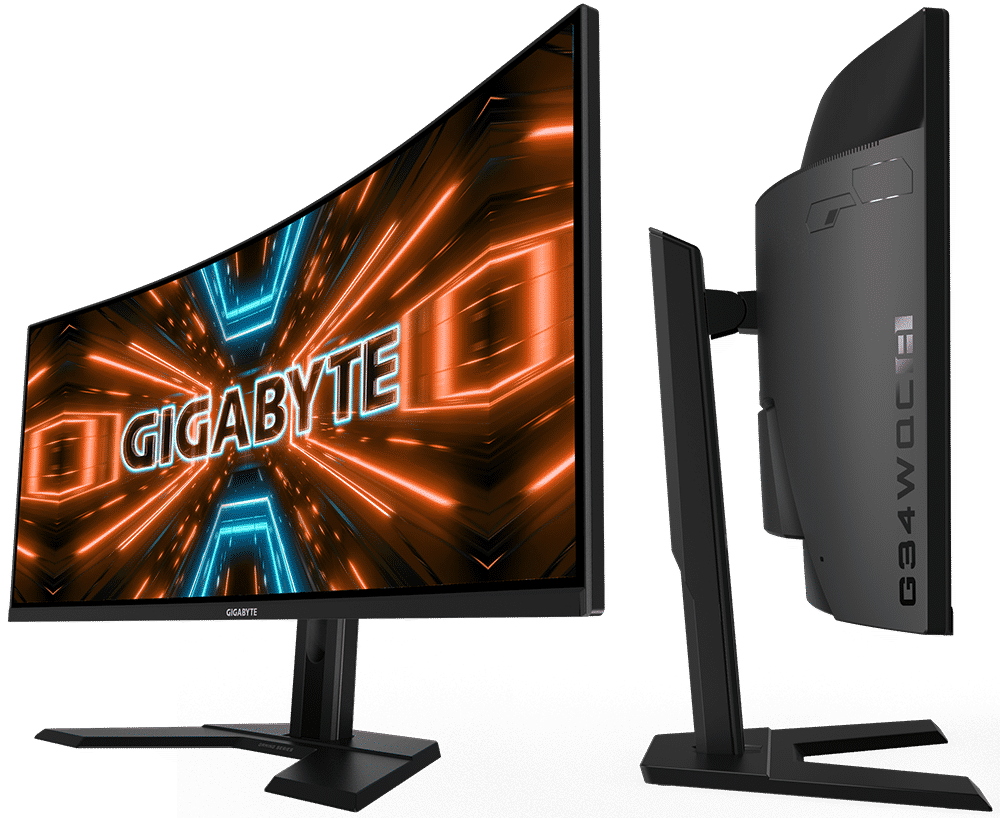 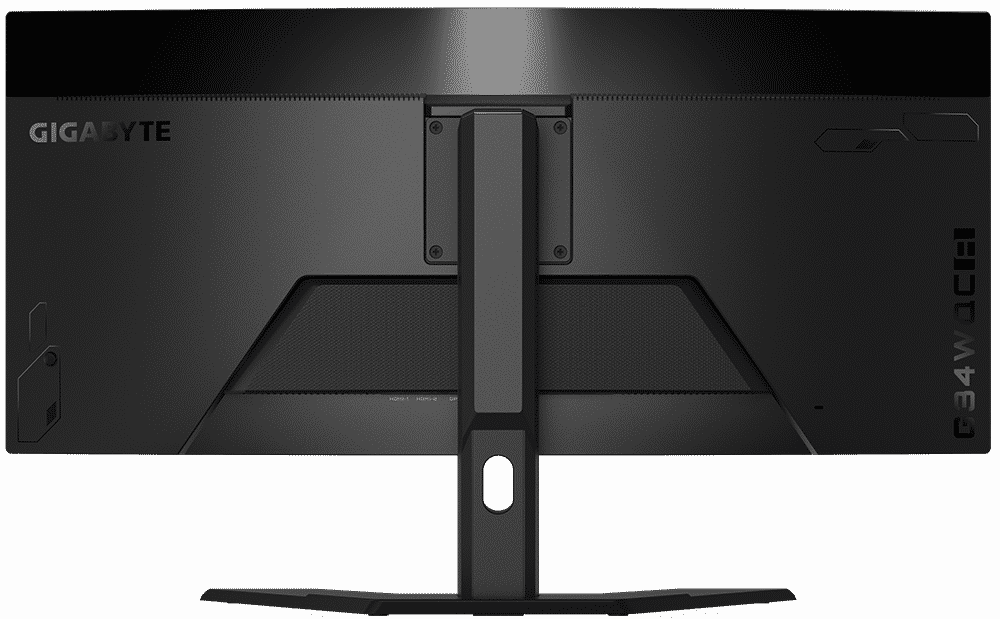 The Gigabyte G34WQCA is basically identical to the older version, but the brand gave it some character by adding discrete improvements to the aesthetics. The device has a matte black finish all over, but the decorative refinements make it look less like an office display. The screen is bezel-free on three sides, but you will still see inner borders if you look close enough.

You need to allocate a lot of space for this monitor due to its 32-inch width and its large base which is necessary to keep it upright. Some users with a narrow desk might have to mix things up a bit, especially if they have big peripherals such as bookshelf speakers. it’s not the heaviest at 18.5 pounds, but it would be wise to follow the assembly instructions and ask for an extra set of hands to set it up.

Build quality is great even if this monitor is a budget model so it should last as long as the premium models. The plastics used are thick enough to prevent flexing and cracking, plus we didn’t see any cosmetic defects during unboxing. The stand is stable and reliable, although there is some wobbling if you accidentally nudge the display.

The Gigabyte G34WQCA has an OSD joystick at the back near the right corner of the chassis. It is easy to use and the OSD menus are easy to understand so users won’t struggle with tweaking some settings. Most budget models have buttons instead, but those tend to be confusing and take more time to master.

The stand included with the Gigabyte G34WQCA offers height and tilt adjustments so it’s easy to get a good angle for long hours of gaming. You can’t swivel or pivot the screen, but curved ultrawides are meant to be centered in landscape mode to enjoy their benefits. You can use VESA mounts for more flexibility, but we don’t think it is necessary unless you have multiple screens or if desk space is limited. 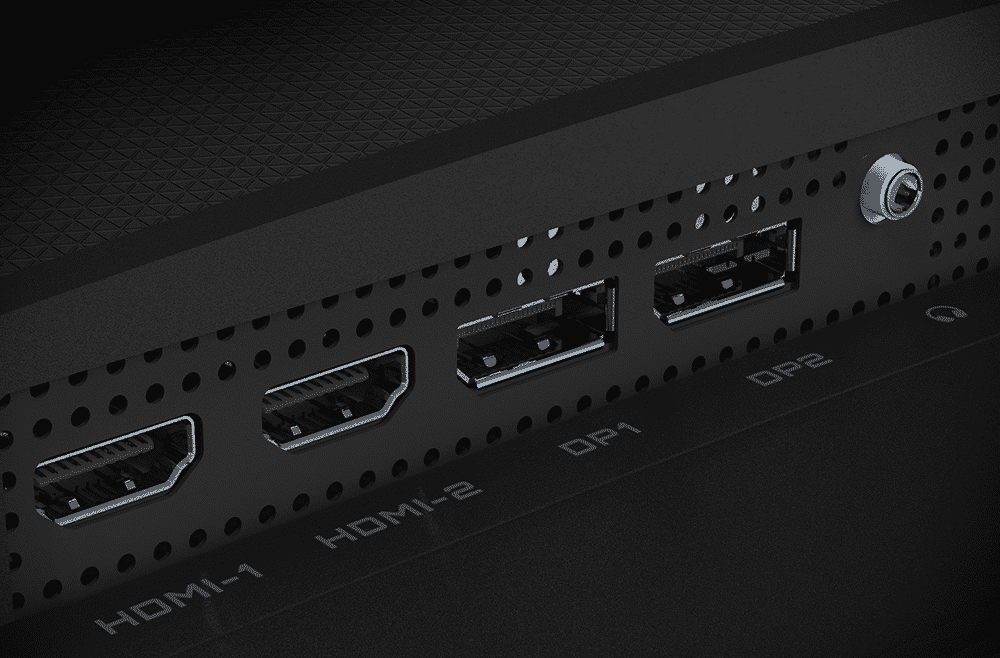 The connectivity layout at the back includes two slots each for DisplayPort 1.2 and HDMI 2.0 so it can handle a multitude of devices. However, there are no extras like USB ports which would be handy for snappy cable management. The M series monitors are better in this regard since they have USB-C and KVM functionality.

The Gigabyte G34WQCA also has a pair of 2-watt speakers built for basic use such as conference calls or music. It’s always nice to have additional features you can use, but the problem with them is that they are quiet. The monitor is better paired with headphones or a desktop set so you can deeply enjoy your games.

The Gigabyte G34WQCA sports a 34-inch 1500r curved VA panel with a 3440 x 1440 resolution, a 144Hz refresh rate, and a 1ms boosted response time. The backlight has a 350 cd/m2 typical output while the contrast ratio is listed at 3000:1 like most VA panels. This model is HDR 400 certified, but we know that the standard offers limited effects to the image when HDR mode is active.

1440p ultrawides are perfect for both gaming and productivity due to the extra horizontal space they provide. The pixel density is lower than a regular 27-inch QHD variant, but its sharpness is still very much enjoyable without sacrificing visibility and legibility. Note that its GPU requirements will be higher than most monitors, but it’s still not as demanding as a 4K screen.

The Gigabyte G34WQCA renders 100% sRGB and 87% DCI-P3 for great vibrancy and saturation in games and movies. it has richer colors than its predecessor, but its default accuracy is worse due to the higher deltaE average of 3.11. It is not a big issue if you are only gaming and the errors are only noticeable if you have a better screen to compare it with.

Calibrating the Gigabyte G34WQCA improved its dE average to 1.31 which is more balanced and natural versus the default. However, you are going to need a colorimeter to get an improvement like this, and those don’t come cheap. It’s not worth spending the extra if you are only using the monitor for anything other than photo or video editing.

Its backlight reached 367 cd/m2 in SDR and 405 cd/m2 in HDR so there is plenty of brightness that can fight off glare in brightly lit rooms. its contrast ratio reached 3612:1 at 60% brightness, allowing it to produce deep blacks and saturation. Its weakness lies in its HDR performance which offers little to no improvement on most games.

Panel uniformity on the review sample had some issues on the top and bottom edges of the curved screen. There are some light leaks that created some clouding issues in dark or all-black scenes. This issue is common with curved displays, but there are better monitors out there with lesser or unnoticeable flaws.

The biggest weakness of the Gigabyte G34WQCA like most VA monitors is its slower pixel response time. The monitor shows some blurring even when you max out its overdrive, but it is only usually noticeable in fast or contrasting transitions. Using the monitor’s Black EQ feature helped a bit, but the screen’s contrast will also visibility drop if you do.

The Gigabyte G34WQCA is compatible with both FreeSync and G-Sync so you can use any GPU from both brands. This duality is handy since GPUs are inflated and hard to come by right now, so you might be stuck with your current AMD or Nvidia GPU. Input lag sits at 6ms at 144Hz, so there is no need to worry about delays while gaming.

Thoughts on the Gigabyte G34WQCA

The Gigabyte G34WQCA is a great budget ultrawide monitor with minor limitations and more to offer per dollar spent. You get a rich and vibrant 3440 x 1440 screen built into a reliable chassis, along with strong gaming performance for the latest titles. It doesn’t have the extra features of its M-series cousins, but that’s okay since the VA-based monitors are usually cheaper.

This monitor isn’t ideal if you are into fast-paced E-Sports titles since it’s prone to blurring. Its calibrated color accuracy isn’t as good as IPS-based variants as well, so those who need a monitor for editing need to look at something else. However, these are negligible since the monitor is so affordable, so it still is a great buy for most users.

Search
NEW
POPULAR
You are here: Home / Reviews / Gigabyte G34WQCA Review – Affordable 144Hz Ultrawide Monitor for Gaming – Recommended
This website uses cookies to improve your experience. We'll assume you're ok with this, but you can opt-out if you wish.Accept Read More
Privacy & Cookies Policy