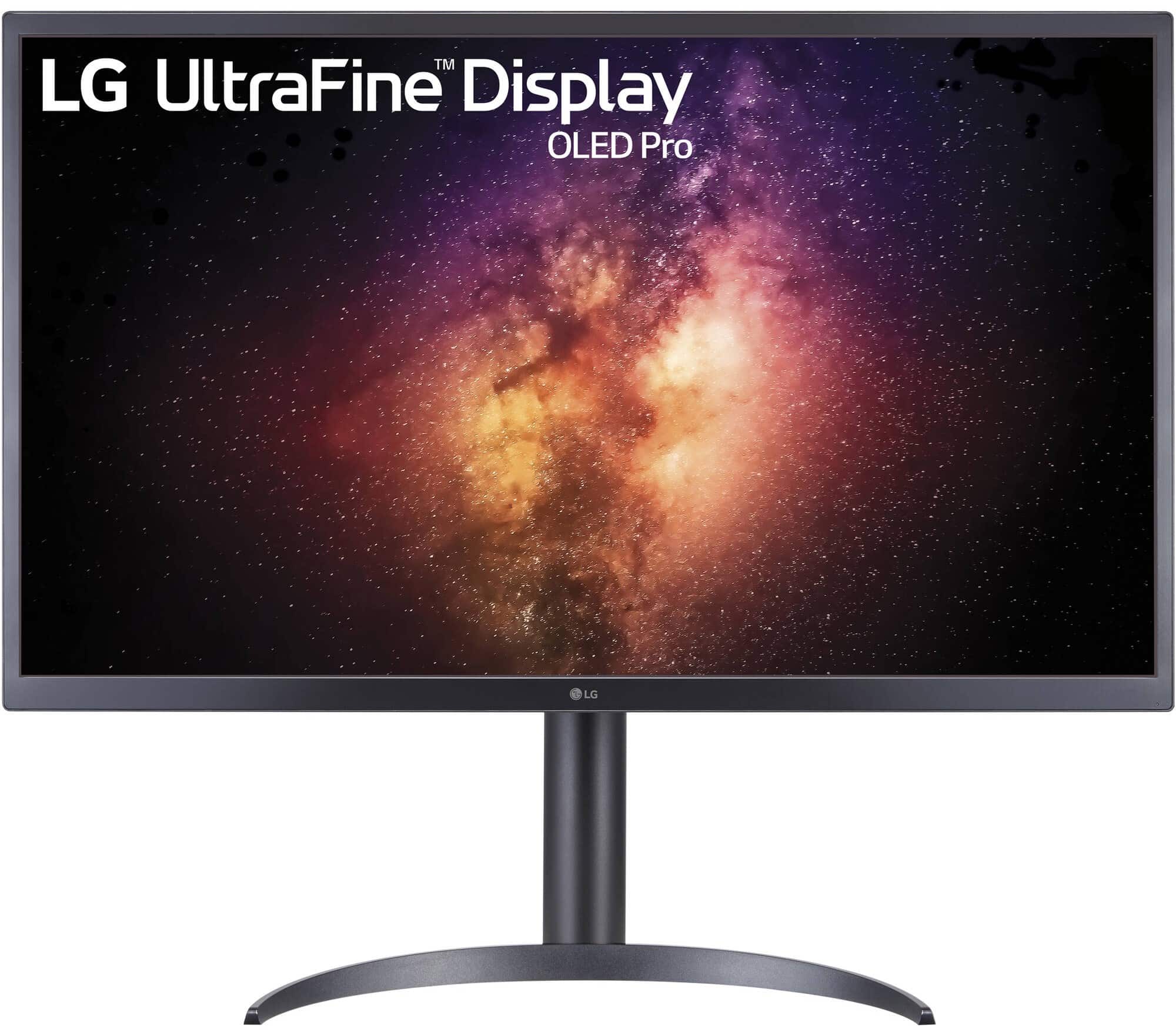 The LG 32EP950-B offers crisp details and stunning color quality and extreme contrast via its unique 32-inch OLED panel. It’s designed for artists and professionals that need high color fidelity, and it’s sadly not tuned in for gaming on the other side of things. Let’s check out if the LG 32EP950-B is worth the investment or if we should skip a generation and wait for the tech to mature. 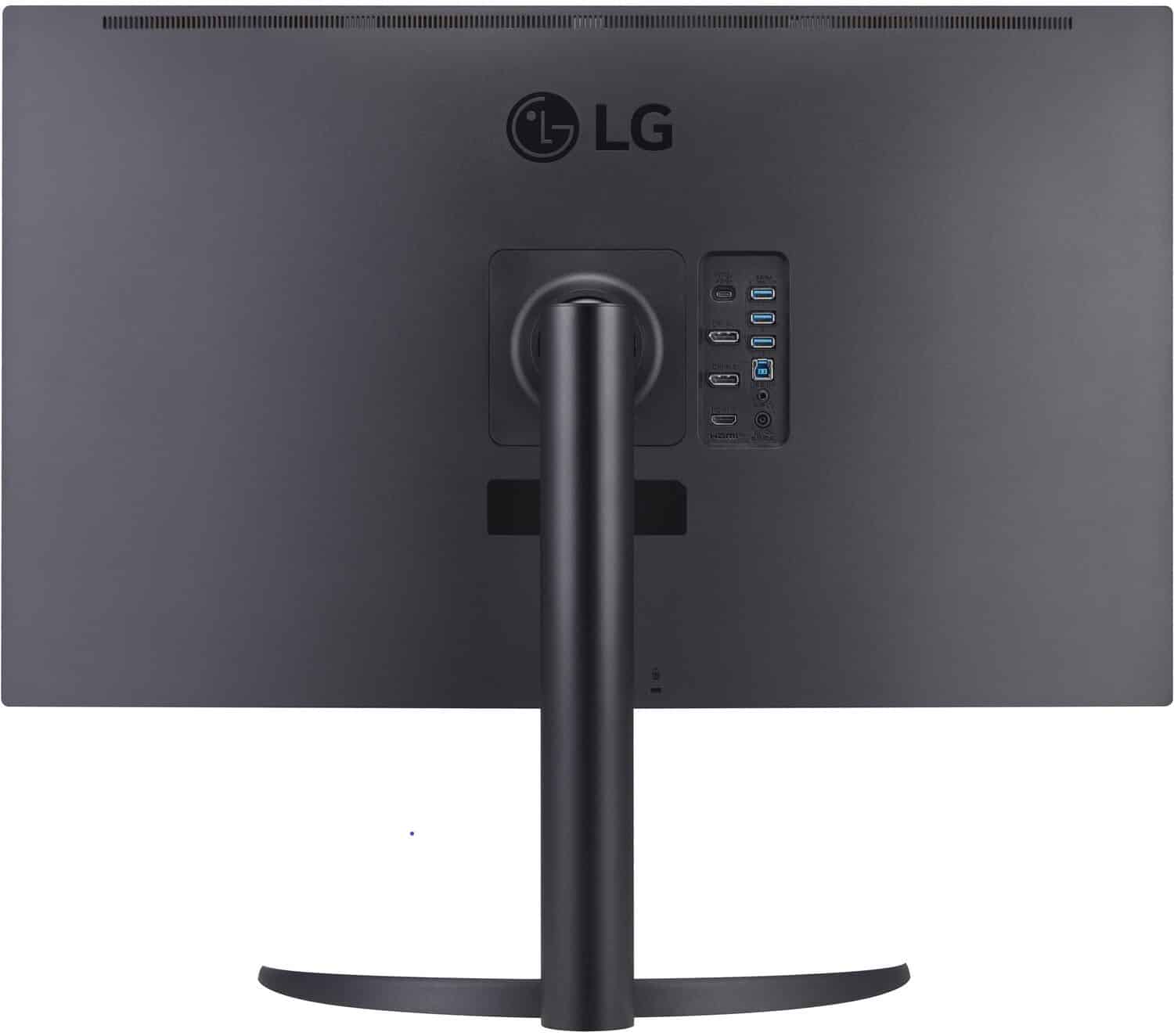 The LG 32EP950-B belongs to the UltraFine lineup, so it has a simplified, all-business appeal and aesthetic just like the 24MD4KL-B. the monitor has a matte black chassis that looks timeless, but we wish they made gray and white versions to match modern workstations. The monitor isn’t bezel-free, but the borders and quite slim so they aren’t disturbing against the large display.

However, this new model is noticeably sleeker and slimmer like the OLED TVs when viewed from the side. Most of the depth is incurred by the large stand, so the chassis itself has a blade-like profile if it’s detached. It’s not a compact monitor by any means, so you might need to clear some desk space for it.

Build quality for the LG 32EP950-B is as expected from a flagship variant, especially one that costs a lot of money. The plastics used feel refined and sturdy, so they won’t easily get scratched or crack and flex under normal pressure. The seams meet each other perfectly, and there is no wobbling coming from the stand.

The LG 32EP950-B has the standard OSD joystick at the middle of the bottom bezel and the brand’s OnScreen Control feature. Both of these will be handy in the long run since its intended users will most likely tweak something from time to time. The OSD itself is well laid out and designed, meaning it would be almost impossible to get lost in its various sub-menus especially since you have a tool that navigates it easily.

The stand included with the LG 32EP950-B offers tilt, pivot, and height adjustments so it can be positioned as both the main display or a secondary. You can also swap it out with a VESA mount for better ergonomics and all-around comfort. It’s worth noting that this model has the ArcLine base stand as opposed to the square-shaped units found on other UltraFine monitors. 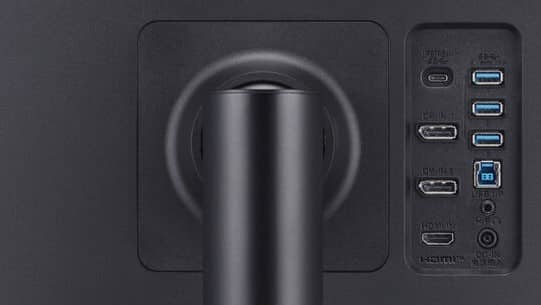 The LG 32EP950-B doesn’t have a whole lot when it comes to connectivity, it does include every modern port prosumers will need. The monitor includes one HDMI 2.0 port and two DisplayPort 1.4 slots, plus a 90-watt USB-C port for modern laptops, There is also a trio of USB 3.0 ports for accessories and a 3.5mm jack for audio equipment.

What’s sorely missing from the LG 32EP950-B is a pair of good speakers like the brand’s MaxxAudio offerings found on its other high-end models. it’s understandable since the chassis is quite slim so big speakers won’t fit. However, for a monitor at this price range, most would expect it to have every essential available.

The LG 32EP950-B boasts a 32-inch OLED panel with a 3840 x 2160 resolution, a 60Hz refresh rate, and a 1ms response time. Its brightness is rated at 250 cd/m2, while the contrast ratio is listed at 1000000:1 since its an OLED panel. The monitor’s focus is for fantastic color fidelity instead of gaming and HDR performance for entertainment.

One important characteristic of this model is its VESA DisplayHDR 400 True Black specification which isn’t identical to the regular HDR400 spec. The brightness requirements are the same, but this category made specifically for OLEDs requires a black depth that’s no greater than 0.0005 nits. That’s impossible for other panel types, so only OLED monitors will receive this certification.

4K is more suited for 32-inch screens when used in a desktop setup since it looks extra sharp with only a minimized hit to legibility. You get tons of space to work with while enjoying the crisp details and clean object lines. The monitor is perfect for design and productivity, and it’s also a capable screen for entertainment and maybe even light gaming.

The LG 32EP950-B renders more than 100% sRGB, 99.5% DCI-P3, and 98.4% Adobe RGB for rich and vibrant colors. The color accuracy is a mishmash using the default profile, with an unexpected deltaE 2.13 average. That’s still great for regular use, but many will expect pinpoint accuracy from a monitor in this category.

Thankfully, the monitor comes with fantastic pre-calibration using its presets for the aforementioned color spaces. Each one has a deltaE average of 0.9 or less, so they are ready to use for color-critical work. Manually calibrating the LG 32EP950-B also produced a dE average of 0.63 which is even better if you need the best possible fidelity.

The LG 32EP950-B reached 261 cd/m2 in SDR and an impressive peak brightness of 572 cd/m2 when HDR is active. Its not comparable to the brand’s other OLED products like the LG OLED CX TVs, but you have to remember that calibrated monitors usually only need 120 cd/m2. The screen’s contrast is indeed as impressive as the 1000000:1 claims since tests were unable to quantify it using limited equipment.

The LG 32EP950-B did not exhibit any panel uniformity issues such as backlight leaks or clouding since it doesn’t have a typical WLED unit. It looks significantly cleaner than identical models such as the PA32UCX which still relies on a FALD backlight. This model also doesn’t suffer from the inaccuracies of the FALD units since dimming is available on every pixel versus the 1152 zones of the mini LED array.

another worry with OLED panels is that they are prone to burn-in issues where static images are retained on the screen. Thankfully, the LG 32EP950-B comes with precautions such as its Screensave mode, Auto-Brightness Limiter, and Screen Shift which shifts images by a few pixels to avoid burn-in. We recommend leaving these features on since they do not affect the image quality in any way.

the LG 32EP950-B’s OLED panel is capable of excellent pixel response times thanks to the nature of the panel tech. blurring and smudging won’t be an issue here even if you try and play fast-paced games on it. It’s one of the benefits of OLED technology, which we hope will roll over to the gaming variants in a year or two.

The LG 32EP950-B doesn’t support FreeSync or G-Sync, along with the other gaming-related features you will find on TVs such as ALLM. The monitor isn’t intended for this purpose, but that doesn’t mean that will not get a gaming-grade variant in the future. Input lag is surprisingly very low at a little under 3ms, so there is no need to worry about delays while using the monitor.

The LG 32EP950-B is a unique prosumer-grade monitor that offers the best image quality and contrast possible. It can go toe to toe with the best in the market such as the Apple XDR display and the Asus PA32UCX, but it has the advantage in many aspects such as contrast. It offers plenty of features, but it’s sadly not designed for gaming.

The two biggest issues with the LG 32EP950-B are its high price and very limited availability in the global market. it is still listed for pre-order on most retailers with at least a month’s lead time for shipping. It’s worth the investment, but you have to have patience and some hunting skills to go along with the money to secure this very high-demand model.

Search
NEW
POPULAR
You are here: Home / Reviews / LG 32EP950-B Review – Premium UltraFine OLED Monitor for Professionals – Editor’s Choice
This website uses cookies to improve your experience. We'll assume you're ok with this, but you can opt-out if you wish.Accept Read More
Privacy & Cookies Policy