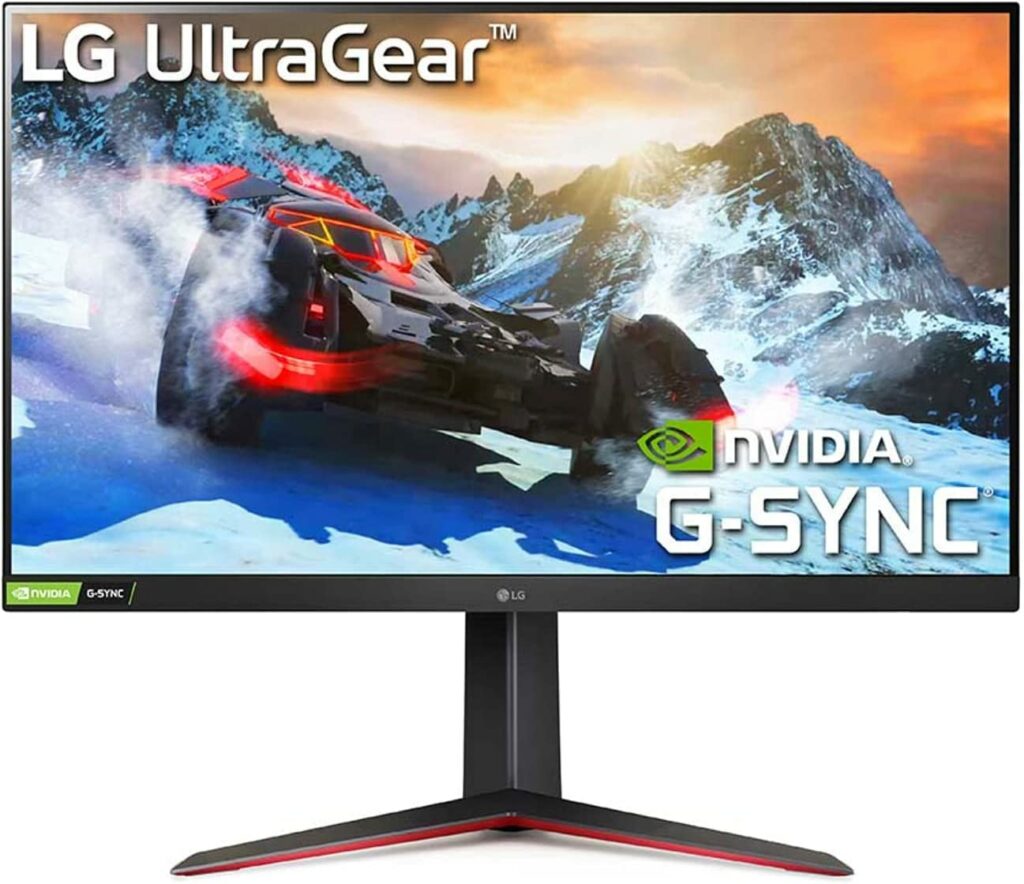 The LG 32GN63T-B is an affordable pick for gamers who want a large, high-refresh screen with all the right gaming features. It is similar to the 32GN650, but it’s a cheaper iteration since it’s supposed to be a Costco exclusive. Let’s check how the LG 32GN63T-B performs to know if it’s the value gaming monitor king you’ve been waiting for. 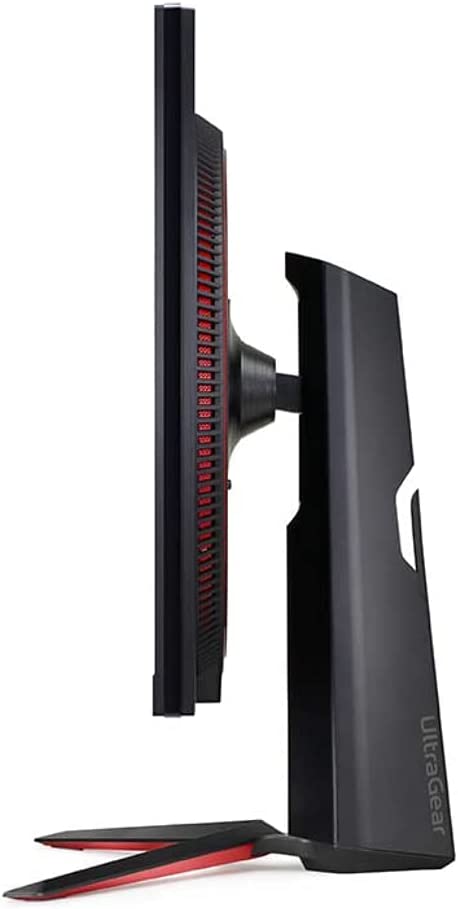 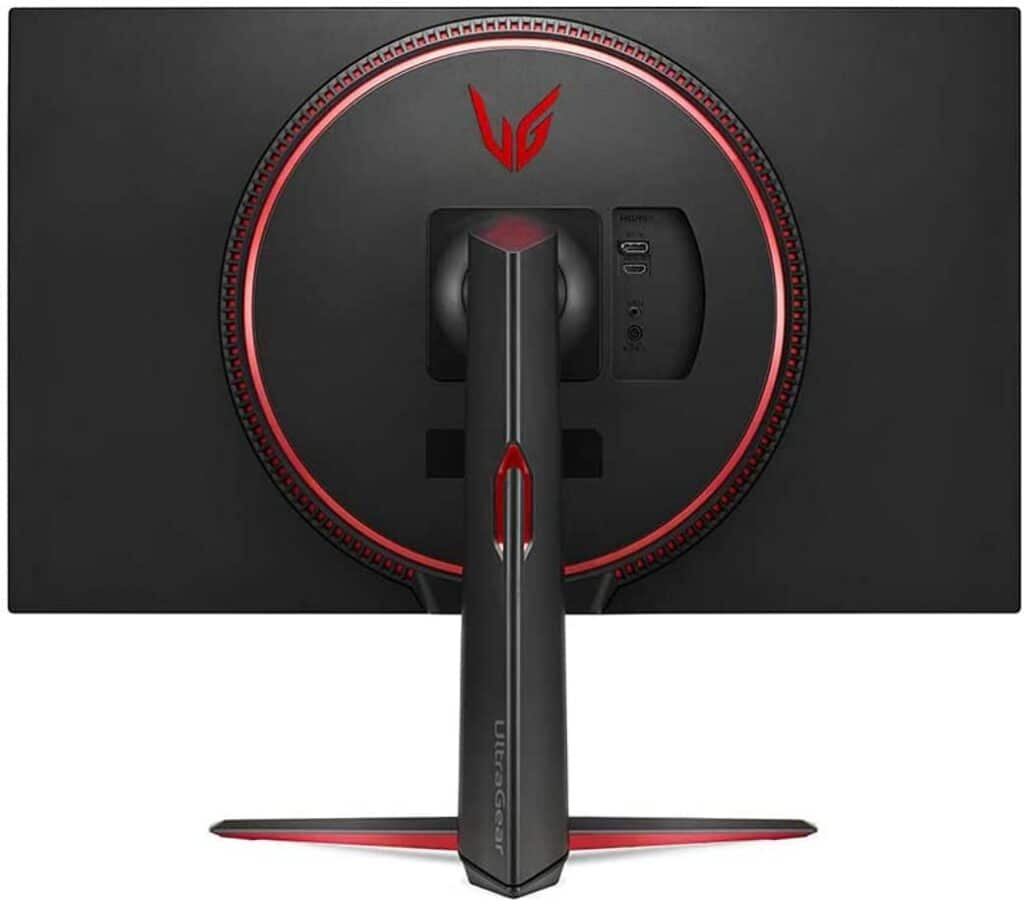 The LG 32GN63T-B sports the sleek and slim UltraGear aesthetic with red accents at the back and on its base. It has a matte black finish with red decorations which may look gaudy to some now that we have the sleeker 2022 models. The display is bezel-free on three sides, but it still has inner borders which show up when it’s in use.

It’s not a compact monitor, so you have to make sure that you have enough space for it before buying. Its 28 inches wide and it needs almost a foot of depth, so it might displace some of your peripherals if you have a small desk. However, it’s light for its size so you shouldn’t have trouble with moving it around or bringing it with you outside your home.

One thing we noticed on this variant is its build quality which felt a bit worse than what other LG UltraGear monitors have. The plastics are thick enough to prevent flexing or cracks, but they seemed cheaper than what we’re used to seeing from the brand. The stand also has some wobbling unlike its more premium siblings in the lineup.

But at least the LG 32GN63T-B retains its OSD joystick and OnScreen Control compatibility despite its price handicap. It is very easy to tweak the monitor using these two tools, especially since the app will let you manipulate its settings with your mouse and keyboard. Other offerings go as far as offering remotes, but that’s not necessary for desktop PC use.

The stand included with the package offers tilt, pivot, and height adjustments for your comfort and convenience. This is crucial since the screen is quite big, and it can strain your neck if you don’t set it up properly. You can also use VESA mounts, but we think it’s only necessary if your desk space is limited. 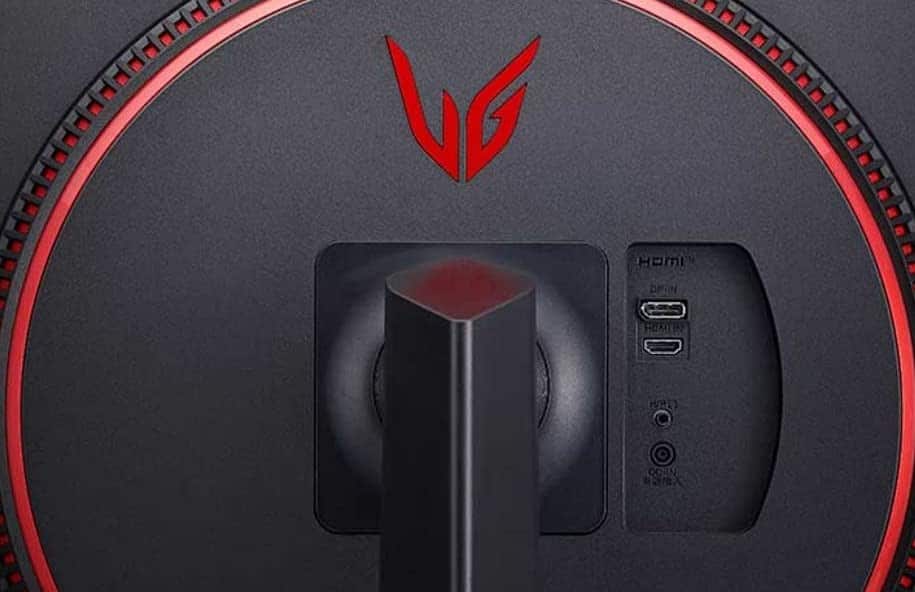 One aspect that got penalized to make the price as low as it is is the LG 32GN63T-B’s connectivity layout. It only has a single slot for DisplayPort 1.4 and HDMI 2.0, along with a 3.5mm jack for speakers or headsets. That’s all you will need for a standard gaming setup, but it is always nice to have functional extras like USB slots for better flexibility.

Another missing feature on this variant is a pair of built-in speakers which can become handy in some instances. The chassis itself is thin so there is no room for it, plus adding them can also affect the product’s pricing. It’s a forgivable omission, especially since most gaming monitor speakers aren’t truly useful for gaming anyway.

The LG 32GN63T-B sports a 32-inch VA panel with a 2560 x 1440 resolution, a 165Hz refresh rate, and a 1ms MBR response time. The backlight has a 350 cd/m2 peak while the contrast ratio is listed at 3000:1 like most VA panels. This monitor isn’t certified for HDR performance, but it can translate HDR10 signals just like most gaming displays.

1440p at this size has a comparable pixel density with a 24-inch 1080p screen. However, don’t be too quick to judge it as a pixelated screen since the higher pixel count still makes it better in image quality. It’s great for games and productivity, but you might need a mid to high-level GPU to make the most out of monitors like this.

The LG 32GN63T-B renders 99% sRGB but its DCI-P3 coverage isn’t as full at 78%. It is still vibrant enough for games and movies, but many options like Gigabyte’s G32QC already have it beat in this characteristic. Its default accuracy isn’t great with a deltaE average of 2.98, but it’s still usable for media consumption and gaming.

Calibrating the monitor reduced its dE average to an excellent 0.77 which is a result you’d usually see on prosumer variants. The downside is that you will need a colorimeter to get this level of improvement, but we don’t think it is worth it. We recommend going with a premium display instead of buying a budget monitor and a colorimeter just to correct its color.

Its backlight peaked at 305 cd/m2 in SDR, but it reached 351 cd/m2 when it receives HDR signals or content. The screen’s contrast is excellent since it could reach as much as 4976:1 at 50% brightness. However, it’s HDR mode is bland since it doesn’t have the necessary peak brightness and local dimming to make it worthwhile.

Panel uniformity for the LG 32GN63T-B sample was great since there were no signs of backlight leaks or clouding on any of the screen’s quadrants. There is some variance in the backlight’s spread from top to bottom, but it is only noticeable in extreme circumstances.

But the biggest downside with this monitor is its slower pixel response time which makes it prone to blurring. You need to set its overdrive to its Faster level to lessen the smudges, but it still can’t remove them effectively. It has a backlight strobing mode, but it is not a big help since it still induces imaging defects and it can cause headaches.

The LG 32GN63T-B is compatible with both FreeSync and G-Sync so you can use both AMD and GPU cards with it. VRR is important for demanding games since stable framerates aren’t always guaranteed. Its input lag sits at 4ms at 165Hz so it’s suitable for fast-paced play without having to worry about delays or sluggish transitions.

The LG 32GN63T-B is a great choice if you want to spend as little as possible on your monitor upgrade. It offers a 32-inch QHD screen which you won’t normally find below $300 even if you go with the new or low-end brands. It has omissions, but it still manages to include creature comforts like its adjustable stand and the OSD buttons.

However, its lack of valuable extras like USB ports isn’t as big of an issue as its slow pixel response time or poor default accuracy. You also can’t get good HDR performance with this model, but that’s understandable since monitors that are equipped for it usually cost twice or thrice. It’s a great buy if you simply want a 1440p gaming monitor, but you should be aware of its limitations before doing so.