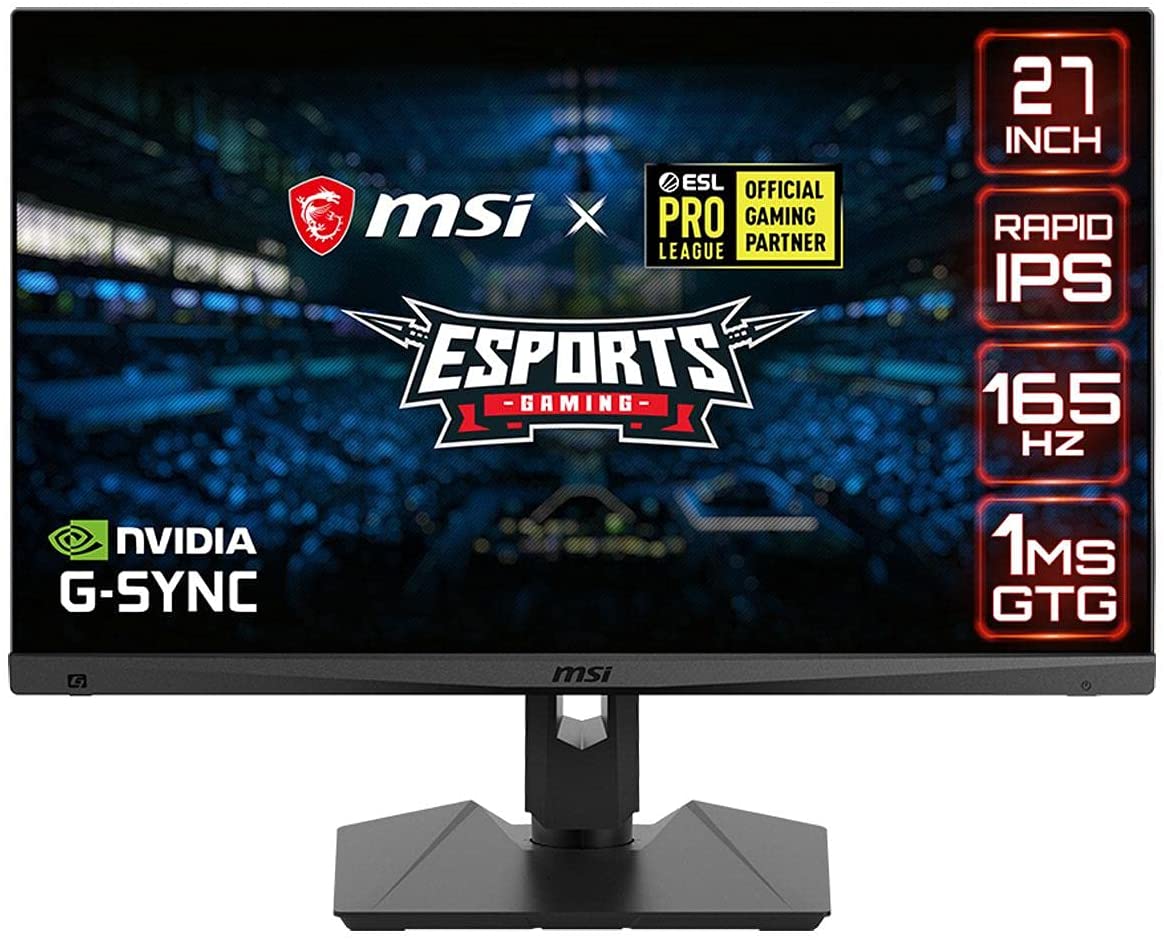 The MSI MAG274R2 offers essential specifications such as its Fast IPS panel for a pleasing E-Sports gaming experience. MSI now often offers IPS instead of VA technology which was more common in their lineup. Let’s see how the reasonably-priced MSI MAG274R2 performs in a very competitive category of the market. 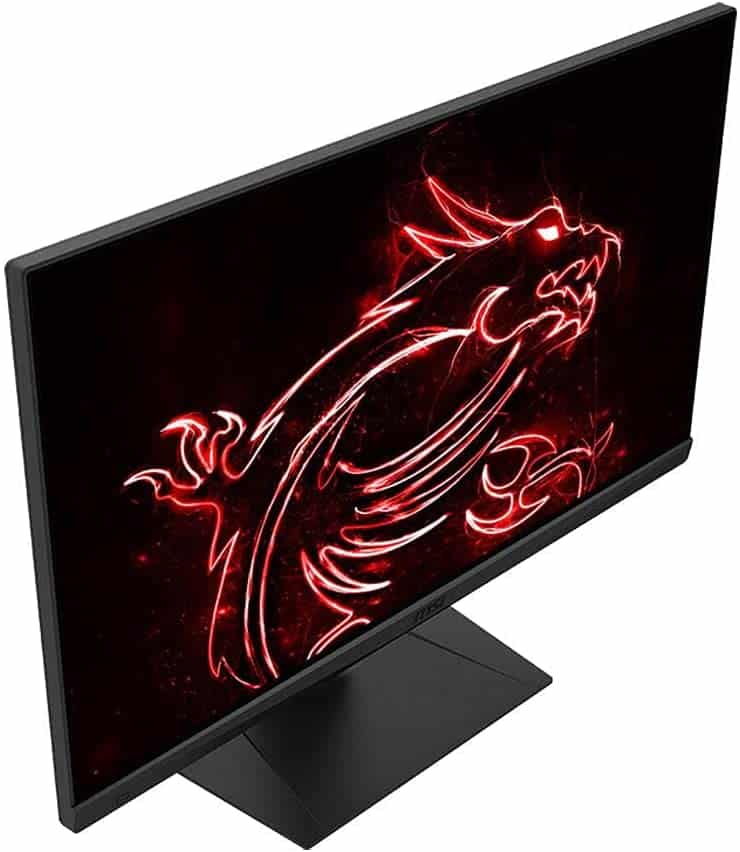 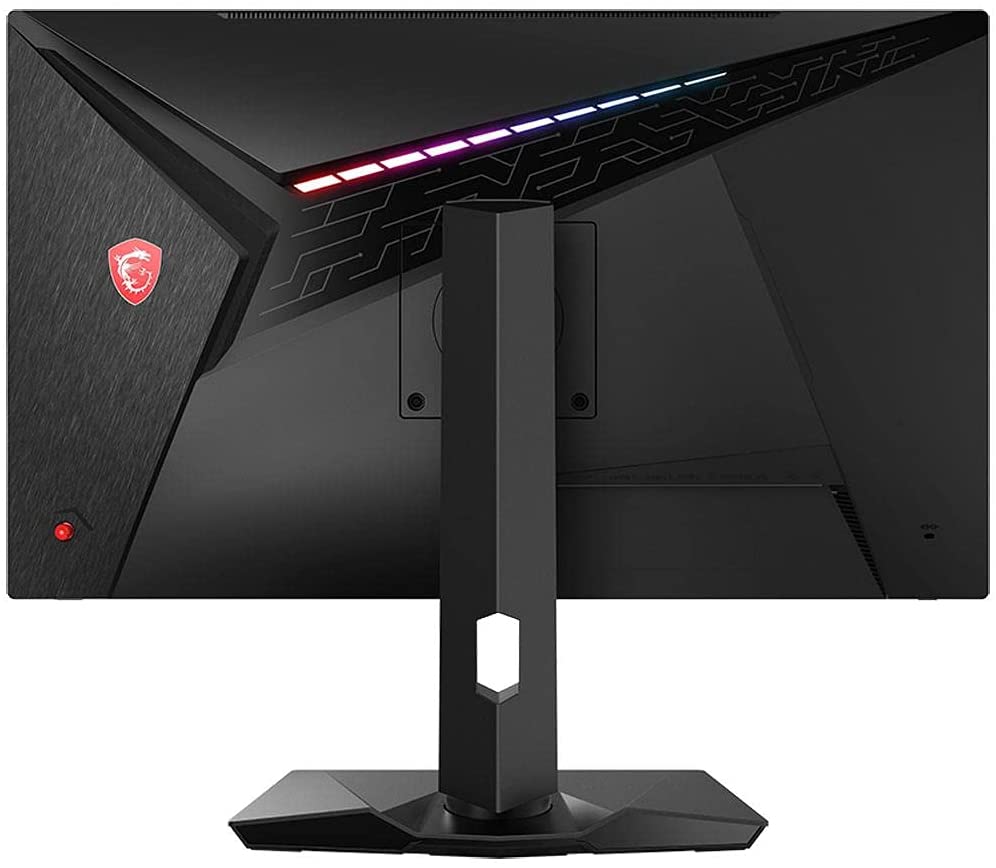 The MSI looks like an office monitor at the front, but its back has a few aesthetic features that the brand’s fans will love. It has a timeless matte black aesthetic that will not clash with gaming or even business setups. The display is bezel-free on three sides, but you will still see inner borders when it’s in use.

Its dimensions are sleeker than some of its competitors, so it’s a good pick for those with multiple peripherals near the keyboard. It only needs 8.14 inches of depth, leaving plenty of space for stream decks or big keyboards with wrist rests. It doesn’t weigh a lot at 13.34 pounds, so it can be moved around easily or packed for LAN party sessions with your buddies.

Build quality for the MSI MAG274R2 is solid so it should last quite a while as long as you don’t drop it. The plastics used are thick enough to withstand cracking and flexing, and there were no cosmetic defects or imperfections. The stand is firm and it doesn’t allow the screen to wobble so you won’t get dizzied while gaming if you have heavy hands.

You also get an RGB strip at the back which is bright enough to cast a bias glow at night. You can control the colors and themes using MSI’s Mystic Light ecosystem which allows this model to sync with your other MSI gear.

The MSI MAG274R2’s control layout is superb since it has a tactile OSD joystick that makes navigation easier. You can also use the MSI Gaming OSD to tweak some key features directly inside your OS so you spend less time on it. Note that you will need to connect the monitor’s USB Type-B upstream port to your PC for the app to work.

The stand included with the MSI MAG274R2 offers tilt, swivel, pivot, and height adjustments for your convenience. It is easy to get a comfortable view angle, plus it’s flexible enough for a triple monitor setup or even as a portrait display on the side. You can use VESA mounts, but that’s only necessary if desk space is tight.

The MSI MAG274R2 has plenty of connectors to suit your needs for gaming and even productivity. you will find a slot each for DisplayPort 1.2 and HDMI 2.0, plus a USB-C slot that supports DP Alt Mode. There is also a trio of USB 2.0 ports for accessories, but you need to connect the type-B slot to your PC for the monitor’s software function.

You also get a 3.5mm jack for headphones, but there are no speakers with this model. That’s fine in most cases since gamers often prefer headsets, but built-ins can be used for other purposes as well. We also want more features for the price, especially since this model starts at $300, slightly higher than many of its competitors.

The MSI MAG274R2 sports a 27-inch Fast IPS panel with a 1920 x 1080 resolution, a 165Hz refresh rate, and a 1ms boosted response time. The backlight has a 300 cd/m2 maximum while the contrast ratio is listed at 1000:1 like most IPS panels. This model is advertised as HDR-ready instead of the usual HDR 400 spec so it is limited in that regard.

1080p monitors at 27 inches are less attractive since their pixel density is lower than the ideal PPI offered by the smaller 24-inch variants. However, visibility is excellent and you won’t struggle with basic tasks like reading. It is also worth noting that it’s easier to get high framerates at 1080p with most GPUs even if you use low to mid-range cards.

The MSI MAG274R2 puts out 100% of sRGB and 93% of DCI-P3 for vibrant images and graphics in games. Its default accuracy isn’t perfect, with a deltaE average of 2.65, but that’s acceptable for gaming variants, especially those with extended gamuts. Most users will be happy with it after a few minor tweaks such as adjusting the brightness.

Calibrating the MSI MAG274R2 improved the deltaE average to 1.17 which is better and usable for editing work. However, most users will be hard-pressed to see the difference in games and images in general. It’s also a fact that colorimeters aren’t particularly cheap, so buying one for gaming isn’t practical.

Its backlight reached 370 cd/m2 at 100% which is plenty for daily use, but insufficient for HDR performance. The resulting contrast ratio at 60% reached 1124:1 which is higher than most IPS panels can offer. However, the MAG274R2 is still incapable of deep black level or luminance, so dark scenes can sometimes look washed out or grayish.

Panel uniformity for the MSI MAG274R2 could use some improvements since there were backlight leaks on its top and bottom edges. This resulted in clouding flaws that can become visible in dark or nighttime scenes. The good news is that it is not permanent for all units since they all vary due to tolerances and the very nature of IPS technology.

The MSI MAG274R2 isn’t the fastest monitor when it comes to pixel response time since it shows some blurring in fast and contrasting transitions. Using its overdrive feature is necessary to curb this flaw, although you can’t max it out since that will induce overshoot. Most Fast IPS panels already work great in this regard, so this could be a minor issue that can be resolved with a future firmware release.

The MSI MAG274R2 is compatible with FreeSync and G-Sync, so VRR will be available for AMD and Nvidia GPU users. This duality is necessary in today’s market especially since there still is a shortage of graphics cards and the prices are still high. Input lag sits at 4ms at 165Hz so the monitor is fast and responsive enough for competitive games.

Thoughts on the MSI MAG274R2

The MSI MAG274R2 offers excellent image quality and speed for thrill-seekers who want vibrant images and no delays. The monitor is well-designed and it even includes USB-C with DP Alt mode for the latest laptops. It has all the necessary features for an enjoyable gaming experience, plus it’s flexible enough for productivity use.

However, the biggest flaw with the MSI MAG274R2 is its mediocre pixel response time that comes up short when compared to its alternatives. Fast IPS panels are already considered better than TN, but this model takes a step back in that regard. It’s also priced higher than similar options like the AOC 27G2, so it might not be the best pick without a discount.

Search
NEW
POPULAR
You are here: Home / Reviews / MSI MAG274R2 Review – 1080p 165Hz IPS Gaming Monitor for E-Sports
This website uses cookies to improve your experience. We'll assume you're ok with this, but you can opt-out if you wish.Accept Read More
Privacy & Cookies Policy