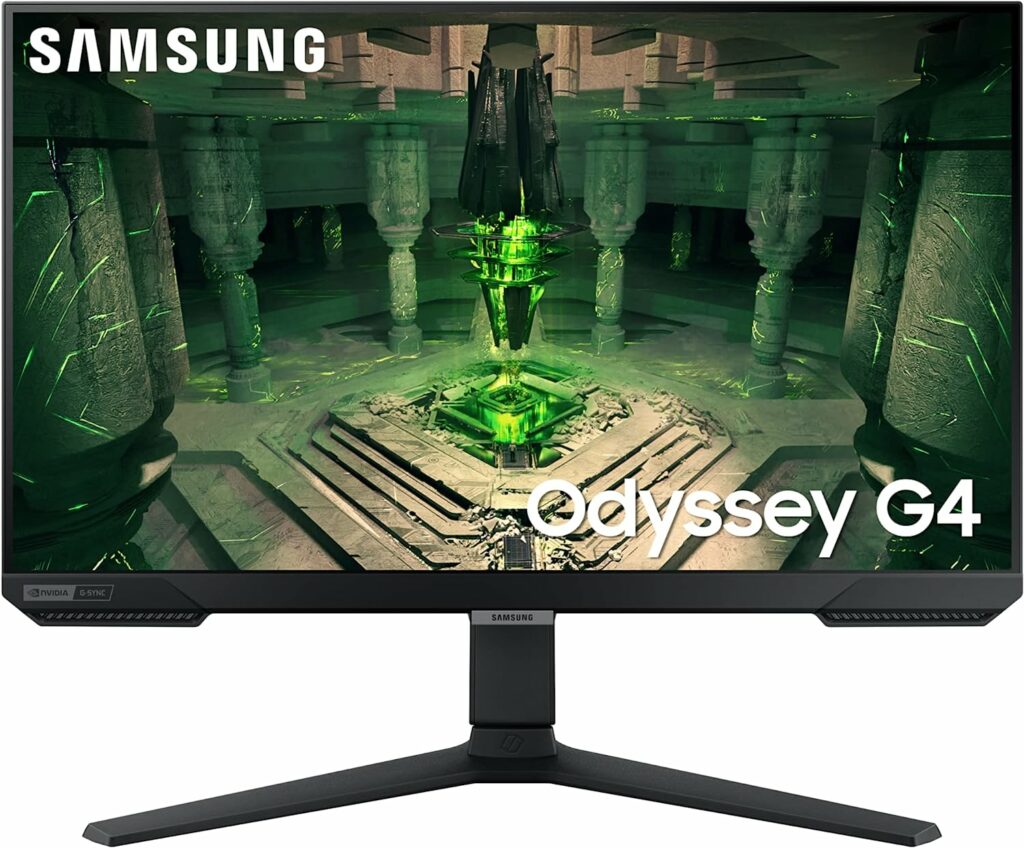 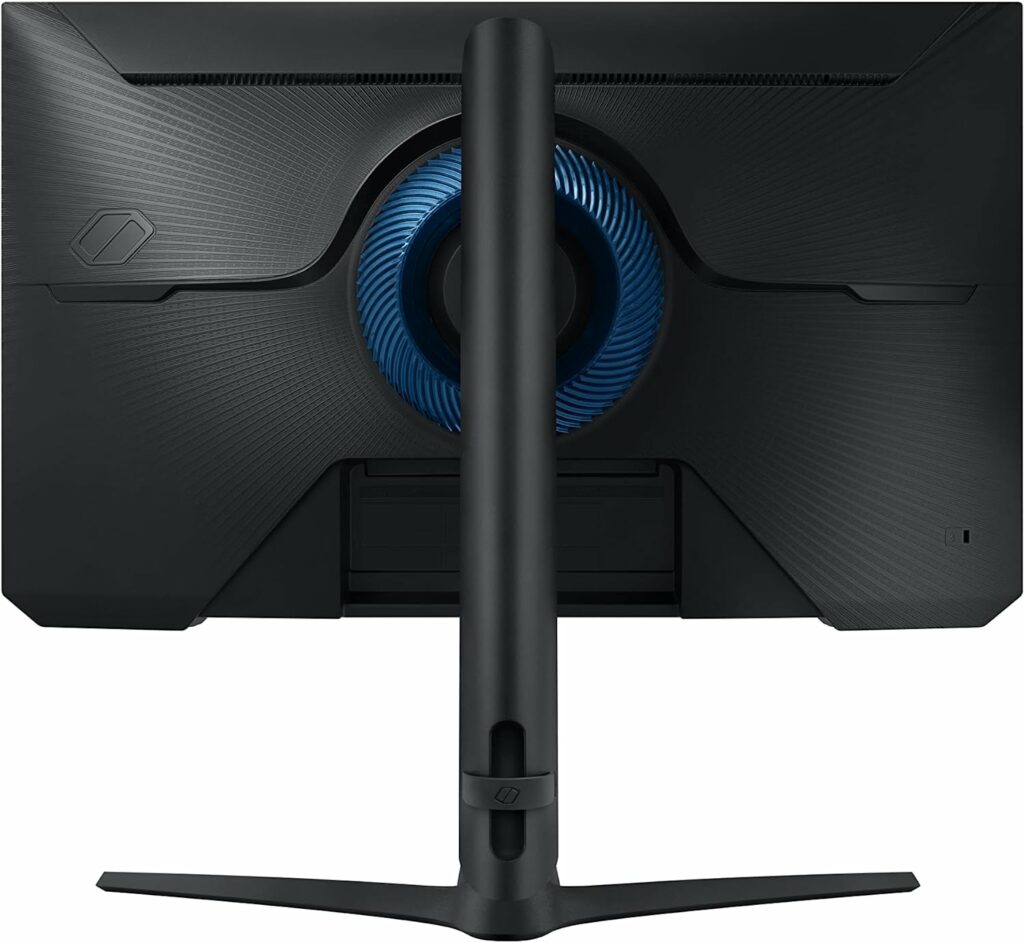 The Samsung Odyssey G4 S25BG40 sports a simpler aesthetic than its premium siblings, but it still retains some distinct design features. It has a matte black finish and a blue accent at the back which doesn’t look tacky or too gaudy like most gaming displays. The display has a three-sided bezel-free design, so it doesn’t look too gaudy or conspicuous in themed builds.

It’s the perfect size for most setups from basic builds all the way to professional competitive gaming builds. The monitor does need quite a bit of depth when fully assembled, but it only takes a fraction your desktop compared to the larger Odyssey monitors we’ve checked out. Its lightweight since its less than 10 pounds, but that doesn’t mean that it feels cheap.

This model’s build quality is decent even if its mostly made out of plastic unlike its premium counterparts. The base is made of metal so its heavy and it anchors the monitors down so it doesn’t tip over easily. The hinge can hold the position you’ve set firmly, but the stand itself is wobbly, especially if you accidentally nudge the screen or your desk. 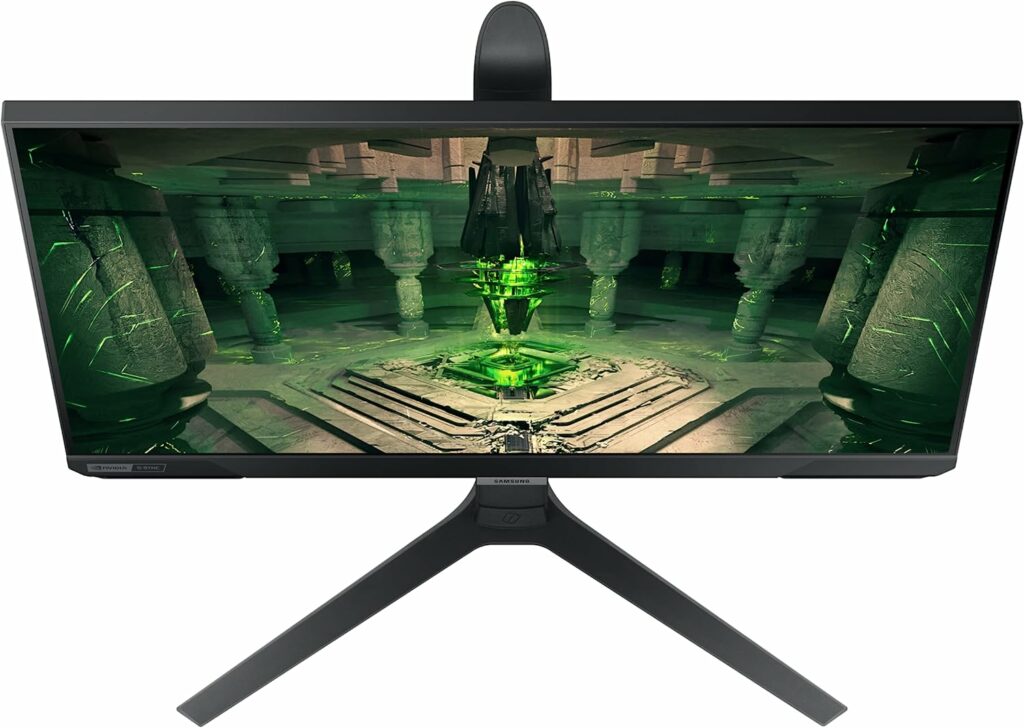 The Samsung Odyssey G4 S25BG40 doesn’t have a joystick for the OSD, but it has a unique D-pad layout similar to what you’ll find on TV remotes. We told you before that we have mixed feelings about it since its still basically a button layout. It’s quicker and easier to master than your standard keys that are lined up, but it still takes more gestures to accomplish something as simple as adjusting the monitor’s backlight.

The stand included with the package offers tilt, swivel, pivot, and height adjustments for your convenience. We love Samsung for including this despite the very low-price tag where you would normally get one that’s limited to tilt. You can also use VESA mounts, but its unnecessary in most instances.

The Samsung Odyssey G4 S25BG40’s connectivity layout got hit by the price cut so it has limited inclusions. You only get a DisplayPort 1.2 slot and two HDMI 2.0 ports, plus a 3.5mm jack for headphones. That’s fine in most cases since you already have USB slots on your PC anyway.

Another missing feature from this monitor is a pair of built-in speakers. That’s one more omission we’re fine with because of the low price, but its also a fact that its target audience will use headsets anyway. Competitive gaming is better served by a tuned and focused pair that shuts out external noise to help the user focus.

The Samsung Odyssey G4 S25BG40 sports a 25-inch IPS panel with a 1920 x 1080 resolution, a 240Hz refresh rate, and a 1ms response time. The backlight has a 400 cd/m2 limit while its contrast ratio is listed at 1000:1 like most IPS panels. This model advertises HDR compatibility, but its not certified by VESA and equipped with special hardware like a FALD backlight.

1080p screens are still popular since they are still used widely in the professional gaming category. Its also a fact that they are cheaper and easier to run, so almost every computing niche still prefers them over 1440p and 4K. You don’t get the upgraded sharpness or screen space of the other resolutions, but its going to be hell of a lot easier to reach that 240Hz limit with most systems.

The Samsung Odyssey G4 S25BG40 renders 100% sRGB and 83% of DCI-P3 so its vibrant enough for games with lots of eye candy. It isn’t accurate out of the box since the deltaE average was a bit high at 2.98. However, we still think that it’s a pretty good result considering how affordable this monitor is.

Calibrating it with a colorimeter reduced that dE average to a stunning 0.61, making the monitor suitable for color-critical work. The downside is that you will need to buy the colorimeter if you don’t have one on hand. The gadget isn’t cheap, so we can only recommend it if you will use the monitor for professional endeavors.

Its backlight reached 371 cd/m2 in SDR with a 397 cd/m2 peak when its hit with an HDR signal. That’s plenty for most cases, but its insufficient for HDR visuals and effects. The screen’s contrast only reached 1053:1 at 60% brightness, so it’s still incapable of deep blacks like most IPS panels.

Panel uniformity for the test sample did not have any major issues like backlight bleeding on the panel’s edges. However, there were some variances in the backlight’s spread so the screen did not look even if it was showing dark scenes or an all-black image. Note that this can change between every unit made, so its entirely possible to get a better unit.

The Samsung Odyssey G4 S25BG40 has an excellent response time at 240Hz, so you shouldn’t worry about blurring or ghosting. The best setting to use is to activate Adaptive Sync and set the overdrive feature to it’s “Adaptive Sync” mode. We know some prefer to use monitors without VRR, but you need to use the “Faster” overdrive level with some overshoot if you are sensitive to blurring.

The Samsung Odyssey G4 S25BG40 is compatible with both FreeSync and G-Sync so you can use GPUs from either brand. This duality is a must-have feature so you won’t get stuck with either one when the time to upgrade arrives. Input lag sits at 3ms at 240Hz so the screen is very snappy and responsive for competitive play.

The Samsung Odyssey G4 S25BG40 is an excellent choice if you want a suitable E-Sports monitor that doesn’t cost a small fortune. Its got decent imaging qualities and it has essential features like an ergonomic stand and an improved control layout. Its excellent price tag supersedes the missing features so its still an excellent buy.

However, there are some quirks that many might want to skip such as the low contrast or the aforementioned lack of other features. Its overdrive is also a bit tricky since the best setting is tied in with the monitor’s Adaptive Sync. However, these are all minor complaints if we base everything on the price.

Search
You are here: Home / Reviews / Samsung Odyssey G4 S25BG40 Review – Affordable 240Hz 1080p Gaming Monitor
This website uses cookies to improve your experience. We'll assume you're ok with this, but you can opt-out if you wish.Accept Read More
Privacy & Cookies Policy