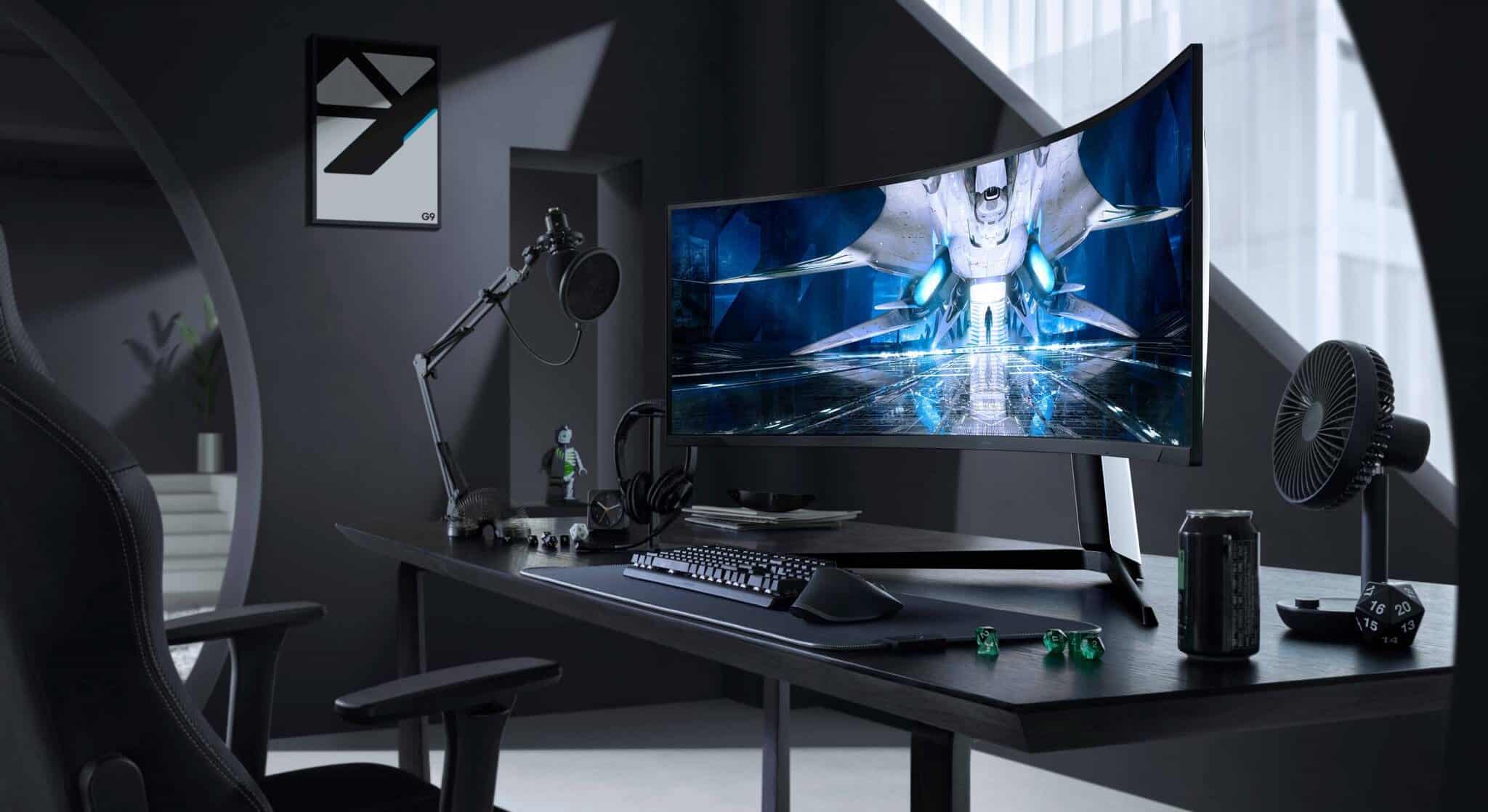 This spec sheet is all we have at the moment, but it tells how the Samsung Odyssey Neo G9 is a compelling upgrade over its predecessor. The design hasn’t changed much and it still looks pretty much just like the older G9 monitor. it has a matte black finish that’s encased in a glossy white shell which makes it look like a true-blue flagship monitor.

You will also find the Infinity Core Lighting System at the back which reminds us of a Star Destroyer’s boosters when they fire up in the movies. The monitor’s CoreSync feature will allow users to personalize the light’s colors for even more immersion. However, there Is no word if CoreSync’s latest version will finally work with existing RGB ecosystems like Asus Aura and Mystic Light.

You still get the standard and massive stand for the G9 monitor which includes tilt, swivel, and height adjustments. Pivot isn’t included since it doesn’t work with the monitor’s width, and super ultrawides will be awkward to use in portrait anyway. You can use VESA mounts as well, but we think it ruins the flowing form the device.

The Samsung Odyssey Neo G9’s screen still has that sweet sweet 5120 x 1440 resolution that refreshes at 240Hz on a 1000r curved Quantum Dot VA panel. However, the biggest upgrade this model brings to the table is its Quantum Mini LED and Quantum Matrix technology. It pushes the screen’s contrast and HDR performance beyond the boundaries of most premium gaming monitors, and only a select few can be compared.

It’s Quantum Mini LED feature has 2048 individually dimming zones with a peak brightness of 2000 cd/m2. The capability is certified by VDE or Verband Deutscher Elektrotechniker, alongside its 1000000:1 static contrast ratio. Quantum Mini LEDs are 1/40t the height of a conventional LED, allowing Samsung engineers to create a backlight solution with extra thin microlayers with a considerably higher count of diodes into a single unit.

Additionally, Quantum Matrix Technology harnesses 12-bit gradation for extreme control of the light source. This aims to enhance the level of detail in HDR to give the gamers a state-of-the-art visual experience where they can enjoy the content as they were meant to be seen.

Another new facet of the Samsung Odyssey Neo G9 is its update to HDMI 2.1 which, alongside DP 1.4, supports VRR. Both Nvidia FreeSync Premium Pro and Nvidia G-Sync Compatibility will work with HDMI 2.1, plus it can be used for next-gen consoles with high refresh rate mode enabled. 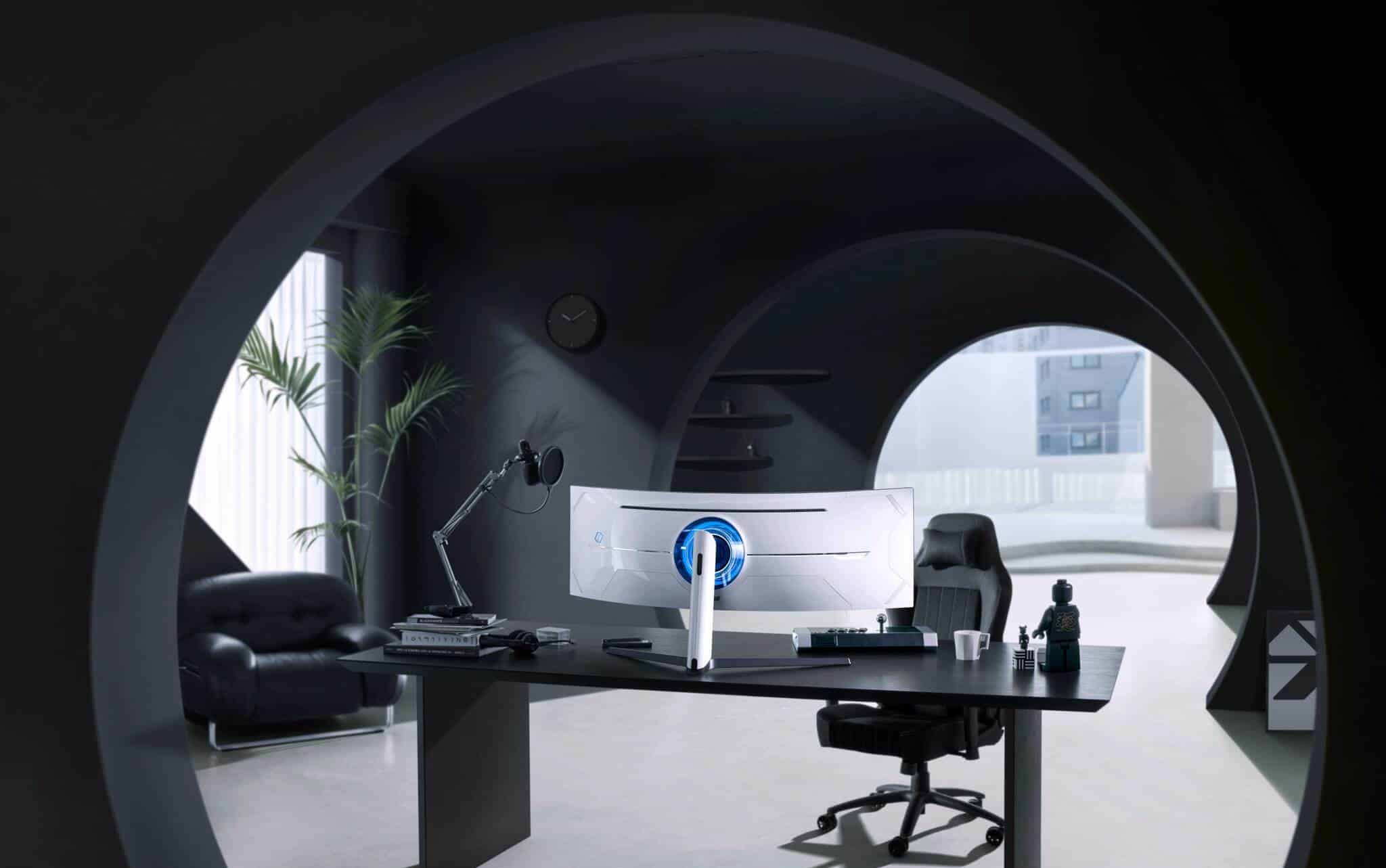 The Samsung Odyssey Neo G9 will become available for pre-order starting today, July 29th at Samsung.com and some select retailers. It will become globally available by August 9th of this year. You can visit the official Samsung site for your country to find out and go to this link for more information on this amazing gaming monitor.

Search
NEW
POPULAR
You are here: Home / News / Samsung Odyssey Neo G9 – The Future of Gaming
This website uses cookies to improve your experience. We'll assume you're ok with this, but you can opt-out if you wish.Accept Read More
Privacy & Cookies Policy