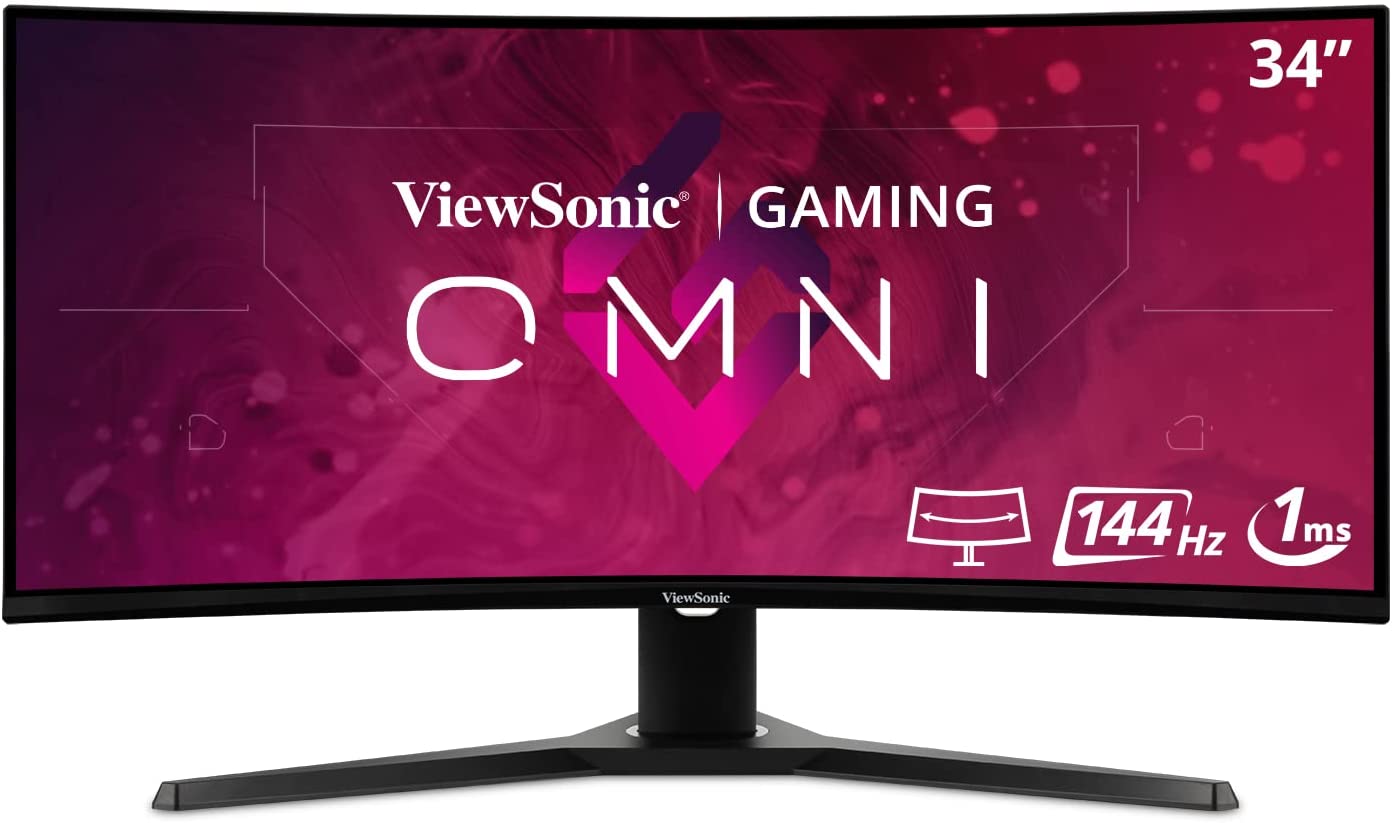 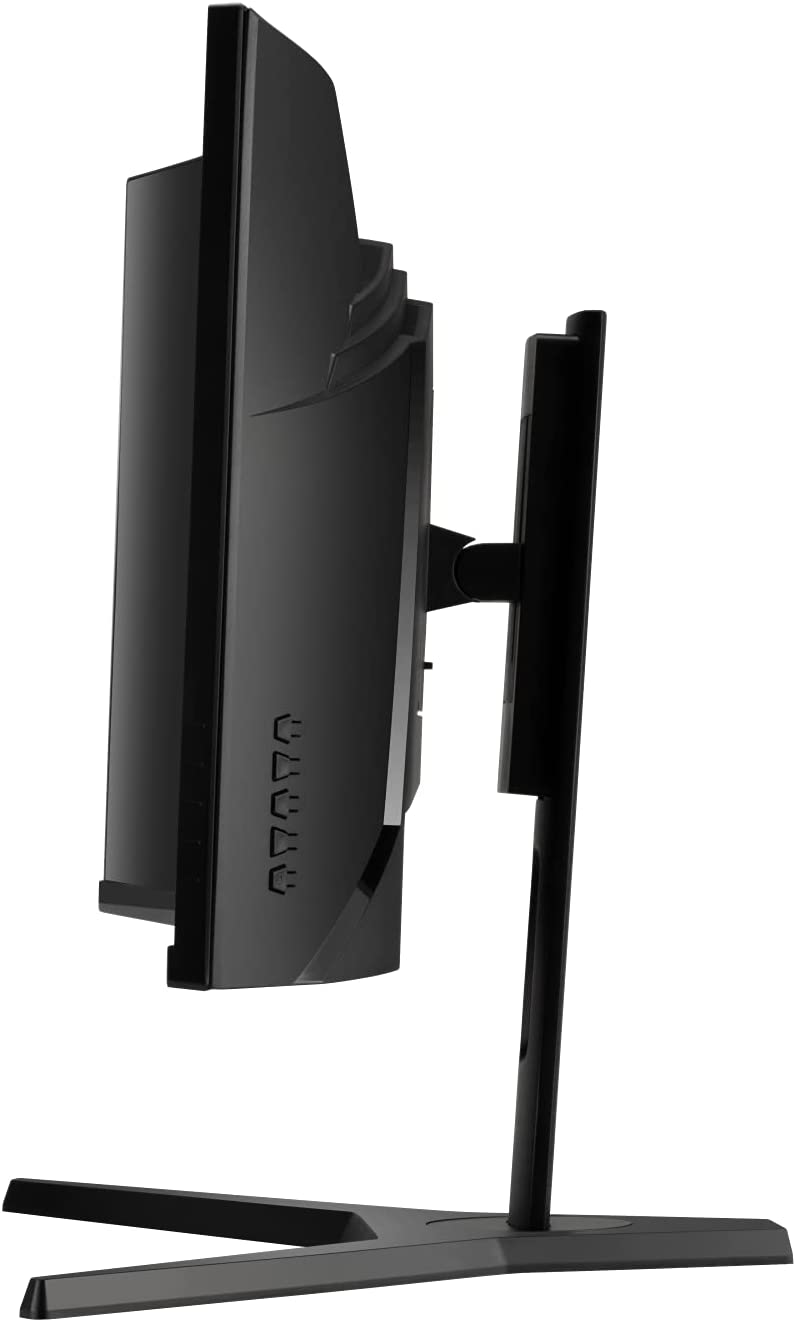 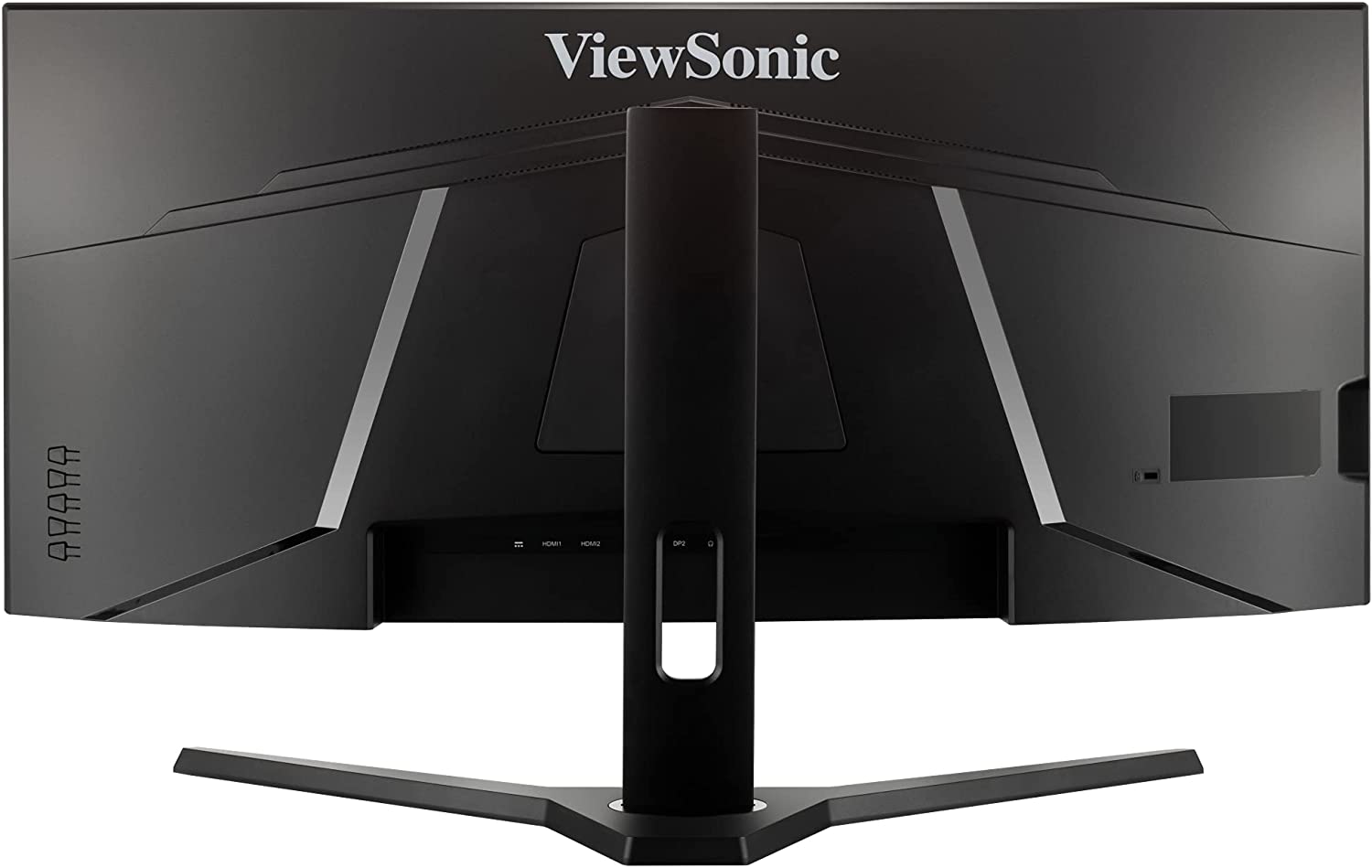 The ViewSonic VX3418-2KPC looks like your standard business or home ultrawide monitor with its minimalist aesthetic. The device has a matte black finish all over so it won’t clash with your setup and is easy to maintain. The display is bezel-free on three sides, but you will still see inner borders when it’s in use.

The monitor’s overall dimensions take up a lot of space, unlike other conventional designs which have square bases and thin housings. That’s fine in most cases, but you have to make sure that your desk can handle the width and the 13-inch depth it requires when fully assembled. It is also quite heavy at 22.49 pounds, so it would be wise to ask for assistance in setting it up.

Build quality for the ViewSonic VX3418-2KPC is great since there were no signs of weakness on any of its parts. The plastic panels were free from cosmetic defects and seemed thick enough to prevent flexing and cracking. The stand has a slight wobble, but it only happens if you accidentally nudge the corners of the screen.

The first downside we noticed is the monitor’s OSD buttons that are located at the back near the right edge of the screen. It takes some effort to reach in and press the keys numerous times to get to a submenu. The keys are responsive, but joysticks are better and inexcusable even at this price range since its competitors have them.

The stand included with the package offers tilt and height adjustments so you can get a comfortable viewing angle. Swivel and pivot aren’t necessary since big curved displays only need to be centered to maximize what they can offer. You can opt for VESA mounts, but it’s completely unnecessary unless space is limited and you’d want to get rid of the massive stand.

Its connectivity layout includes two slots each for DisplayPort 1.4 and HDMI 2.0, along with a 3.5mm jack for headphones. There are no USB ports, but the lack of these extras is acceptable if the monitor’s price is low enough. Getting four inputs from a budget model is already a big bonus, especially if you have multiple devices or gaming platforms.

We like that the ViewSonic VX3418-2KPC’s speakers get 5 watts of power unlike most built-ins in budget models. They don’t have the deep oomph that’s necessary for gaming and movies, but they are loud enough to be used for secondary purposes. It’s about time this underrated aspect of a monitor gets upgraded since the 2-watt or 3-watt units they use are too quiet.

The ViewSonic VX3418-2KPC boasts a 32-inch VA panel with a 3440 x 1440 resolution, a 144Hz refresh rate, and a 1ms boosted response time. the backlight has a 300 cd/m2 output while the contrast ratio is listed at 4000:1. This model doesn’t advertise HDR certification since it focuses on smooth and rich visuals from its extended display.

34-inch ultrawides aren’t the sharpest monitor you can get, but the upgraded pixel count and its advantages are noticeable. Games look crisper but text and small objects are still visible and legible enough to prevent eye strain. You also get more space to work with for multitasking, but you will need more GPU horsepower for games if you want high framerates.

The ViewSonic VX3418-2KPC renders 99% sRGB and around 85% DCI-P3 for decent vibrancy in games and movies. its default accuracy isn’t perfect, but the deltaE average of 2.78 is still acceptable for a budget model. Most users will be happy with a few minor tweaks such as adjusting the backlight to a comfortable level.

Calibrating the monitor reduced its dE average to 1.12 which is decent enough for content creation and some editing. The problem is that you need to enlist a colorimeter to refine the monitor like this, and those don’t come cheap. Each panel is different so results will vary, so relying on ICC profiles or a specific list of settings from reviewers will create different results in average accuracy.

The ViewSonic VX3418-2KPC’s backlight reached 301 cd/m2 at 100% brightness while its contrast peaked at 3456:1 at 50% brightness. It is capable of fighting off glare in well-lit rooms and it works great for nighttime or dark scenes. Blacks look deep and convincing, unlike IPS or TN panels which struggle in this regard.

Its panel uniformity had some minor issues due to some backlight leaks at the top edge of the screen. They show up as minor clouding in dark scenes if you look close enough, but they are mostly unnoticeable in other circumstances. This is common on curved displays but there are better units out there with fewer symptoms.

Its main weakness is its slower pixel response time that’s common on its competitors and most of the VA-based gaming displays. Some trailing can become noticeable in fast-paced and contrasting transitions. Using the monitor’s overdrive can help in this regard but maxing it out will induce overshoot instead of correcting the issue.

The ViewSonic VX3418-2KPC is compatible with both FreeSync and G-Sync so you don’t have to lose out on VRR. This duality is a must-have since there’s no guarantee that you will be able to get a specific GPU at a decent price at this time. Input lag sits at 4ms at 144Hz, so the monitor is just as fast as its counterparts.

Thoughts on the ViewSonic VX3418-2KPC

The ViewSonic VX3418-2KPC is a great choice for thrifty gamers who want to upgrade their screen into something bigger and sharper. It is not picture-perfect out of the box, but it looks good enough to be used for gaming right away. It doesn’t have extra features, but its decent build quality and price to diagonal inch ratio make up for that.

It’s obvious that there are limitations if you go with this budget model such as its lack of extra ports or its limited ergonomics. However, that’s expected from a model like this, and we think that it’s a fair trade if you are getting a decent gaming ultrawide. The ViewSonic VX3418-2KPC is a great pick for thrifty users who want a fast and immersive screen for gaming and maximizing productivity.

Search
You are here: Home / Reviews / ViewSonic VX3418-2KPC Review – Affordable 144Hz VA Ultrawide for Gaming – Recommended
This website uses cookies to improve your experience. We'll assume you're ok with this, but you can opt-out if you wish.Accept Read More
Privacy & Cookies Policy