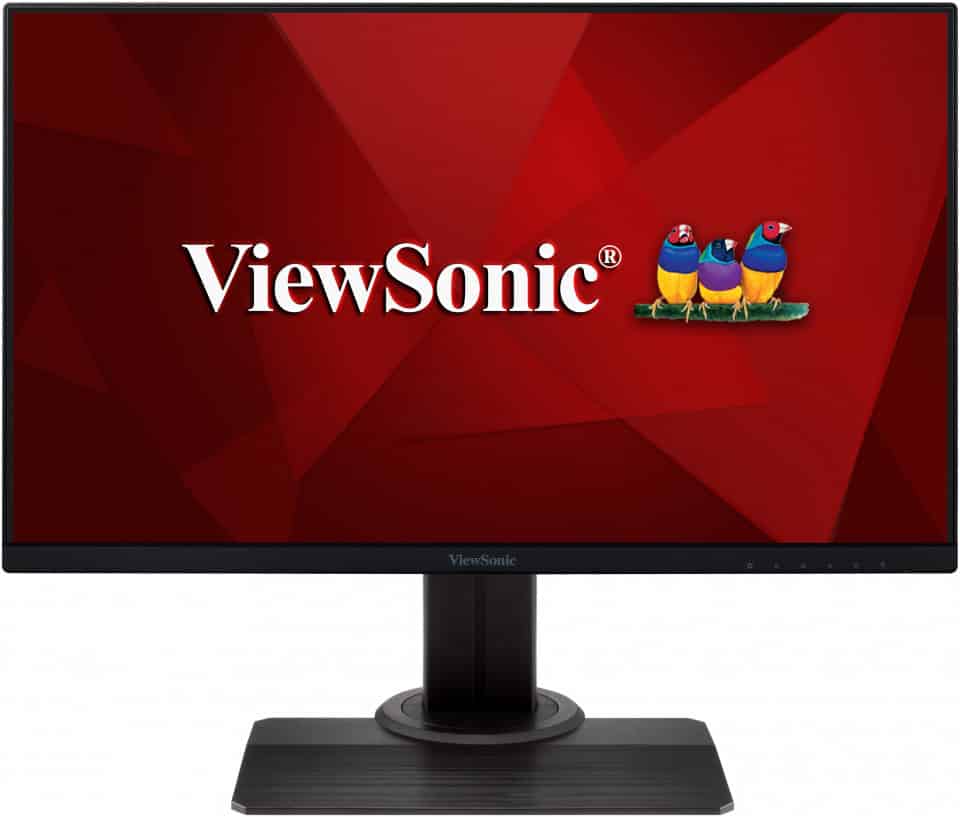 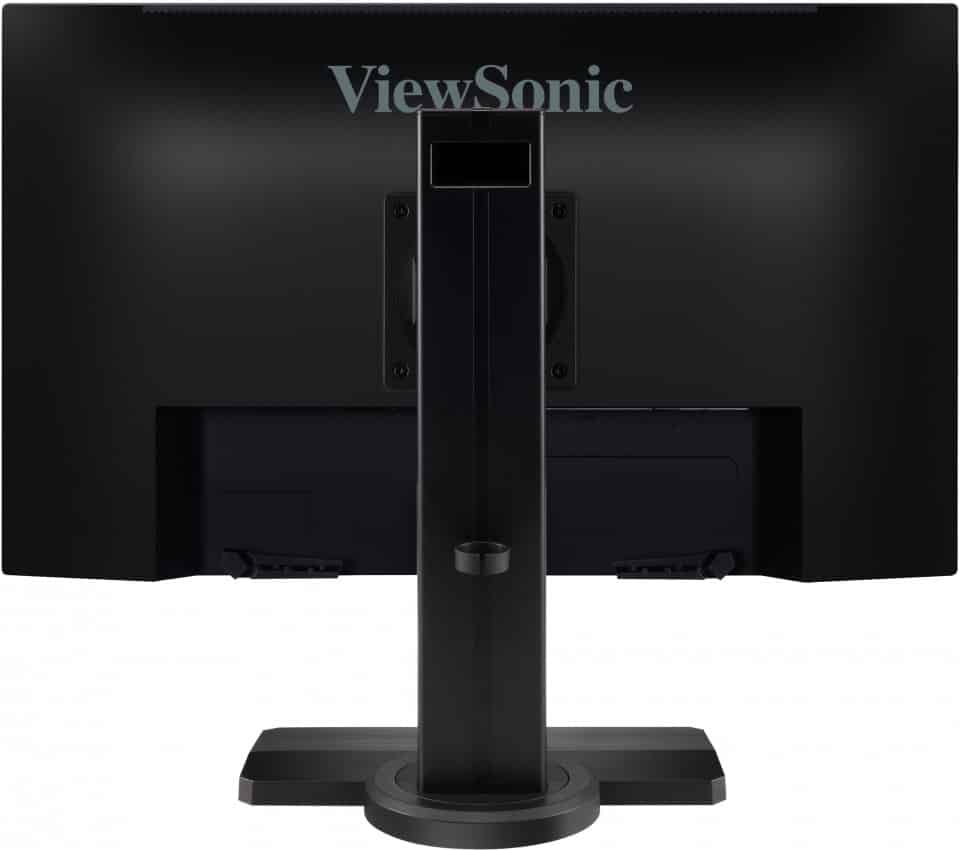 The ViewSonic XG2431 doesn’t have the aesthetics of the Elite monitors, but that’s okay if it means that you will pay less for it. The device has a matte black aesthetic with brushed textures on some parts so it looks timeless and it will not clash with any build. The display is bezel-free on three sides, but you will still see inner borders when it’s in use.

What we like about this look over the higher-tiered design are its dimensions which are more modest. The device only needs 7.3 inches of depth, but that doesn’t mean that it is less stable or rigid once propped onto your desk. It also only weighs 15 pounds so it’s very easy to move around or bring with you to LAN parties.

Its build quality is great as well since the monitor feels durable and reliable like many ViewSonic offerings. The plastics used are thick enough to withstand cracking and flexing, plus we didn’t see any cosmetic defects on the device. The included stand offers excellent stability so gamers won’t have to deal with a wobbly or sagging display.

One thing we disliked on the ViewSonic XG2431 is its OSD buttons which are more difficult and confusing to use versus joysticks. The latter is now widely preferred, and even budget models include them for better functionality and convenience. It’s not a massive hassle, but it takes more time and effort to reach a specific setting.

Another noticeable add-on to the monitor is its two cable bungees at the lower part of the rear. Future monitors should add this feature since it’s invaluable in keeping desks free from the clutter of multiple peripheral wires going to the back of the build. The newer elite monitors such as the XG320U have this, and we think it should be a common trend.

The stand included with the package offers tilt, swivel, pivot, and height adjustment for your convenience. It is easy to get a comfortable view and it makes the monitor ideal for multi-display setups. You can use VESA mounts, but it is only necessary to spend the extra in extreme circumstances.

The connectivity layout on the ViewSonic XG2431 is basic, but it includes everything you will ever need for daily use. You get DisplayPort 1.4, two HDMI 2.0 ports, and three USB 3.2 ports for peripherals at the back. That’s plenty for your PC plus consoles on the side, but we wish it had USB-C connectivity to make it even more flexible.

You will also find a pair of 3-watt speakers with the monitor to complete its value-oriented package. They can’t get loud enough or provide audio that will work for games and movies, but having a backup for basic tasks is always welcome. We the target audience will prefer headsets, but we like getting more bang for your buck in the form of extra tools from any monitor.

The ViewSonic XG2431 sports a 24-inch Fast IPS panel with a 1920 x 1080 resolution, a 240Hz refresh rate, and a 1ms response time. The backlight has a 350 cd/m2 typical brightness, while the contrast ratio is at 1000:1. This model is VESA certified for DisplayHDR 400, but it’s the most limited in terms of imaging improvements.

Most users won’t struggle with this monitor since it’s basically the same as common office and school displays. The only difference is its refresh speed, so you don’t have to adjust to enjoy the visibility and legibility it offers. It’s also easy to get high framerates with numerous GPUs, so you don’t have to spend a fortune on a flagship card to max out the 240Hz output.

The ViewSonic XG2431 renders 100% sRGB and 78% DCI-P3 which is vibrant enough for gaming and daily use. It’s also pre-calibrated so the screen’s deltaE average is only at 1.69 which means it offers great color fidelity out of the box. Users will only need to adjust a few settings such as the brightness before using it.

Calibrating the ViewSonic XG2431 with a colorimeter improved its deltaE average to 0.67 which is excellent. That’s something you’ll usually see on prosumer displays instead of value-oriented gaming monitors. However, the downside is that you have to spend more on the colorimeter, and it’s impractical if you are only gaming.

Its backlight reached 365 cd/m2 in SDR and 405 cd/m2 in HDR which is plenty even for a brightly-lit room. Its contrast, on the other hand, isn’t impressive since it only reached 945:1 at 50% brightness. The screen’s black luminance is quite high, so it can’t produce deep dark scenes and its HDR feature isn’t as good as what’s advertised.

We didn’t see any considerable uniformity issues on the ViewSonic XG2431 sample so the image looks even. There is some variance in the backlight’s spread, but its only noticeable if you scrutinize the monitor with a colorimeter. Note that this can change between every unit due to the nature of IPS, so there are worse ones out there.

The best thing about the ViewSonic XG2431 is its pixel response time which is practically blur-free. You need to use its overdrive’s middle setting to achieve this, but you can also use the monitor’s tunable strobing feature. The monitor has an app that lets you fine-tune the monitor, although its brightness will proportionally drop its maximum level as well.

The monitor is compatible with both FreeSync and G-Sync so you don’t have to miss out on VRR and its benefits. It is nice to have this duality now since the GPU market is unstable so it won’t matter which video card brand you pick if you want to use Adaptive Sync. Input lag sits at 3ms at 240Hz, so it’s very fast and responsive enough for competitive gaming.

Thoughts on the ViewSonic XG2431

The ViewSonic XG2431 is a fantastic choice if you want a fast and vibrant gaming display that won’t cost a fortune. It is functional and well-designed so it doesn’t look like a decorative gadget when it’s integrated into your build. What’s most important about it is its blur-free performance which is crucial for winning in E-Sports.

Its lowest points are its limited contrast and the OSD buttons which should have been replaced with a joystick. However, the former is common and expected from an IPS variant while the other is forgivable since it’s a budget model. We highly recommend the ViewSonic XG2431 if you are into competitive gaming since it offers top-notch performance and it doesn’t waste dollars on unnecessary add-ons.

Search
NEW
POPULAR
You are here: Home / Reviews / ViewSonic XG2431 Review – Affordable 240Hz IPS Gaming Monitor
This website uses cookies to improve your experience. We'll assume you're ok with this, but you can opt-out if you wish.Accept Read More
Privacy & Cookies Policy