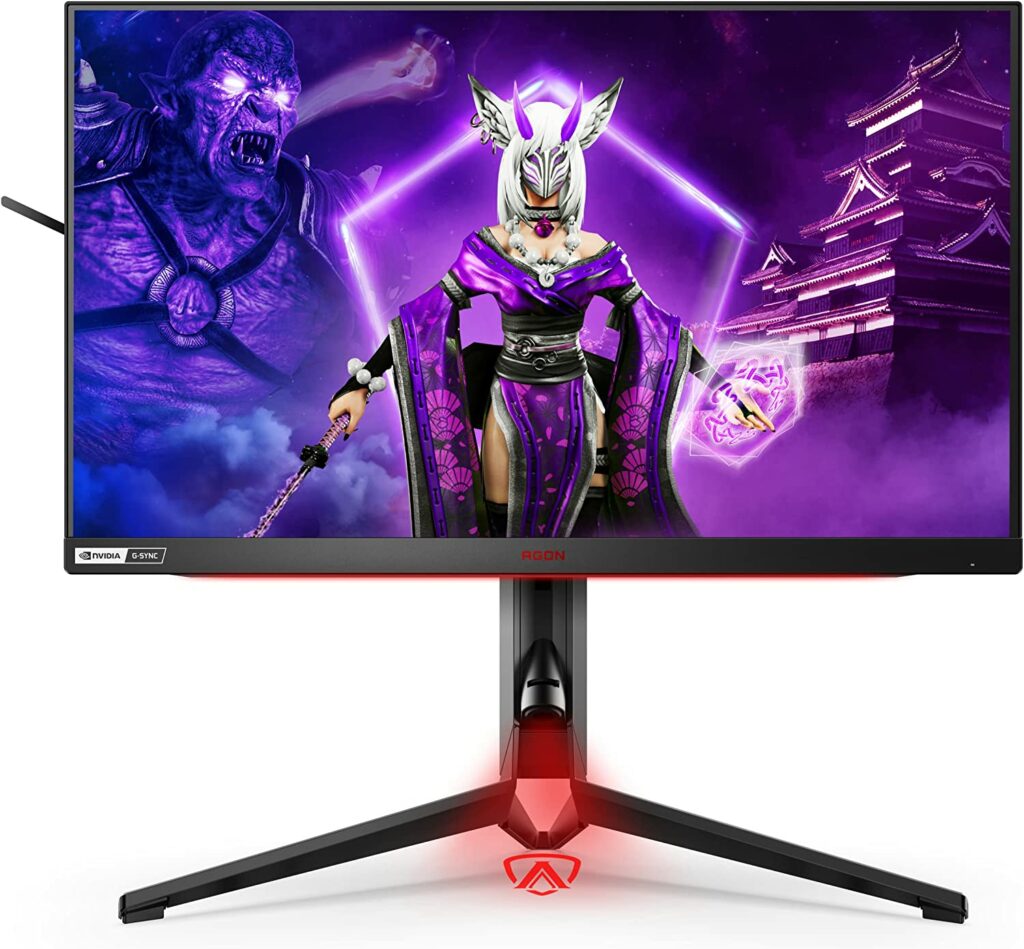 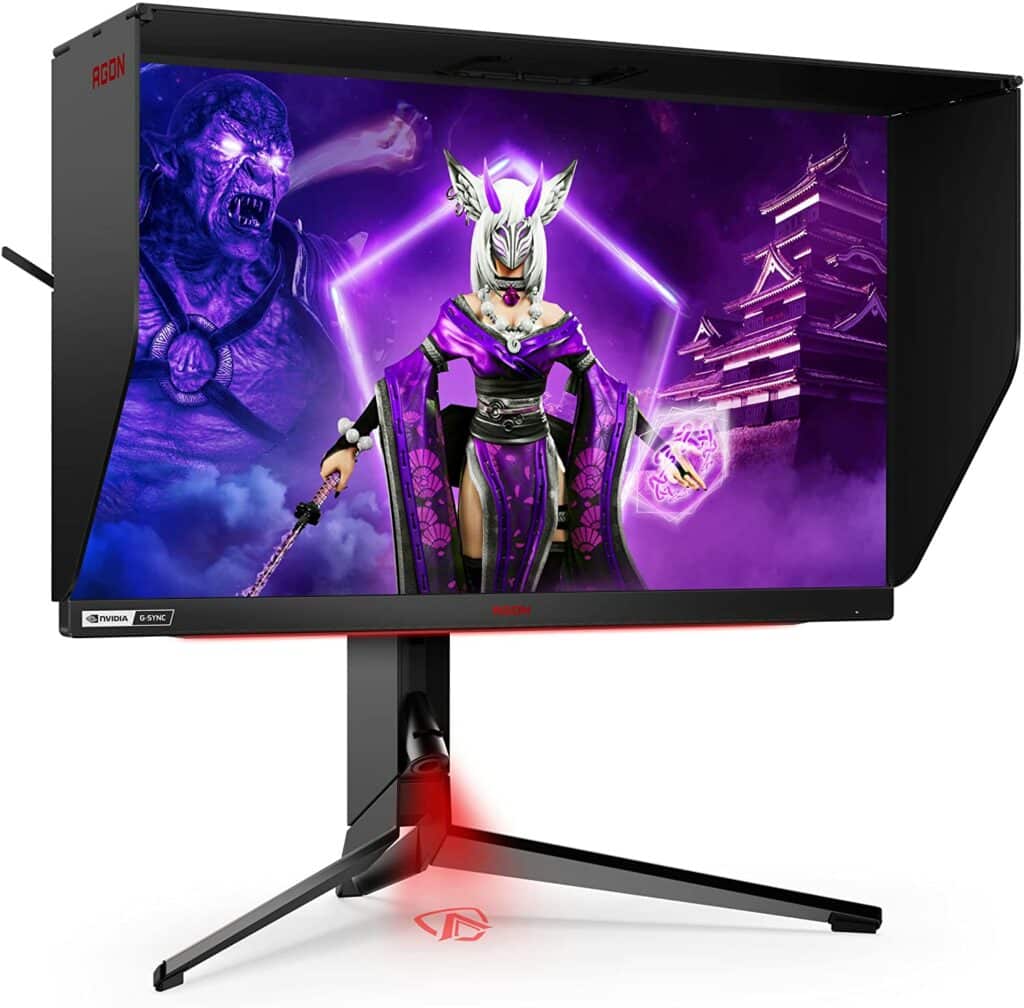 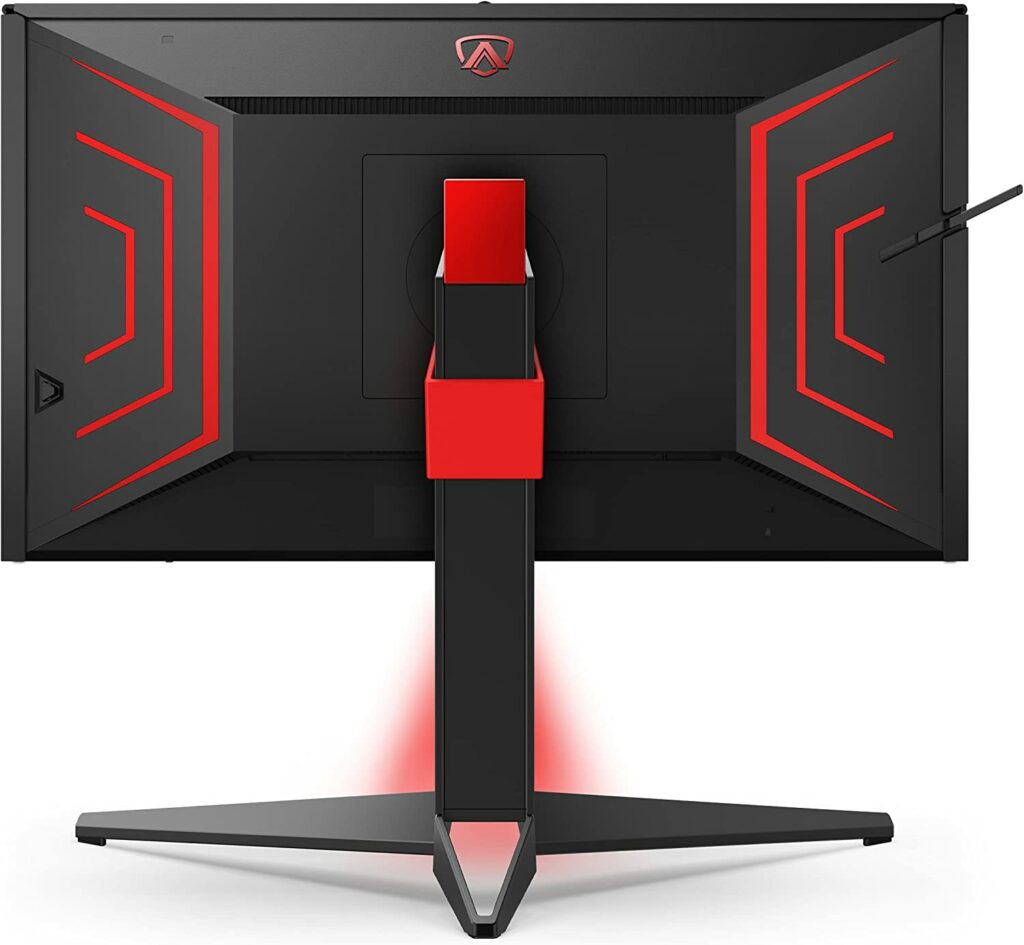 The AOC AGON AG254FG has a noticeably more aggressive design than the 24G2 since it belongs in the AGON lineup. The device has a matte black aesthetic with red accents, plus it has key lighting features on the stand and chassis. The display is bezel-free on three sides plus it includes a shading hood to fight off glare which will affect the image output.

The device is regular-sized by today’s standards for a 1080p display so most won’t have issues with placement or setting it up. It is not too heavy at 14.02 pounds, so you can happily bring it with you to gaming conventions or LAN parties. What’s overkill about it is its massive stand which requires a foot of depth from your desk so some rearranging might be needed if you have a small desk.

This variant is part of the premium lineup, so its build quality is a few levels above the G2 monitors from the brand. The plastics used are thick and sturdy while the metal stand is solid and stable enough to keep the screen upright. The included shade hood seems flimsy, but it’s actually a very secure one it is affixed to the monitor’s edges. 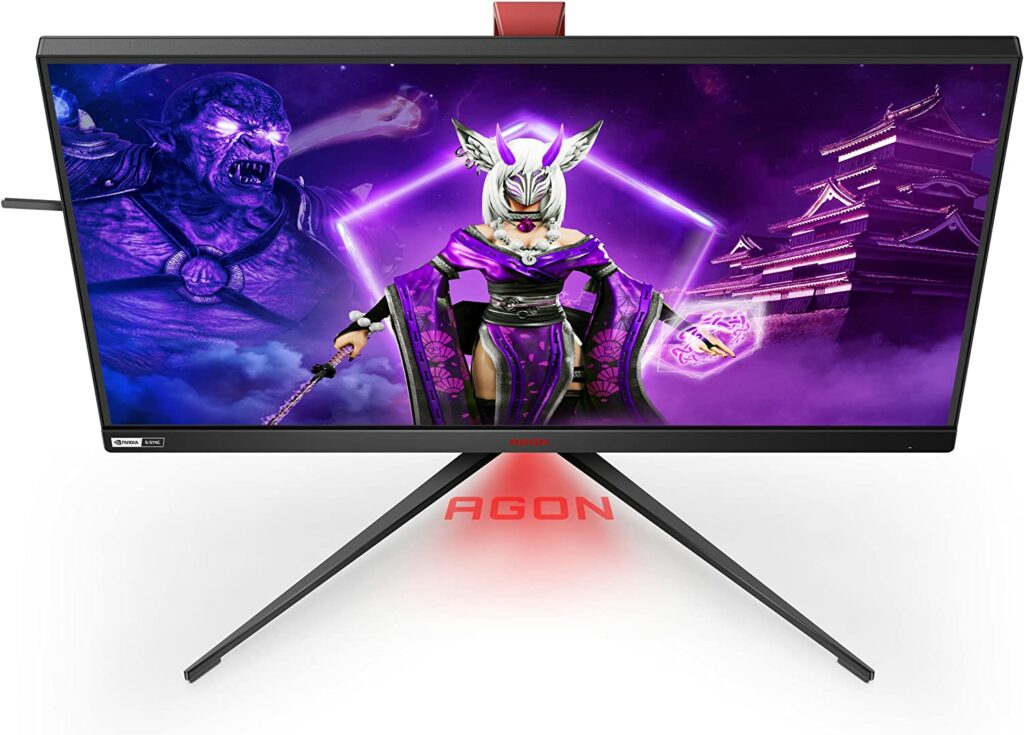 The first distinct feature of the AOC AGON AG254FG is its RGB lighting at the back and on the bottom edge of its face. You also get an AGON logo projector on the stand, so there are many ways to achieve the aesthetic setup that you desire with this model. We particularly liked the positioning of the LED array at the back since it casts an appreciable bias lighting glow, but the bottom edge LEDs can be distracting if you are gaming.

You also get the signature AGON control pad with the package along with a joystick for the OSD. Both enable easy access to the monitor’s various features or to quickly switch between its presets and modes. The monitor has plenty of settings you can play with, so it is nice to have handy tools which make the process quick and painless.

The stand included with the monitor offers tilt, swivel, pivot, and height adjustments for your comfort and convenience. It also has guides for cable passthrough so you can streamline your setup for that clean, high-end look. You can also use VESA mounts, but it’s only necessary if desk space is limited or if you have multiple monitors in use.

The AOC AGON AG254FG’s connectivity layout includes DisplayPort 1.4, two HDMI 2.0 ports, and four USB 3.2 slots for your peripherals. you will also find three 3.5mm jacks which are meant for headphones (combo) speakers, and a dedicated microphone. It has all you will need for your gaming setup, but a monitor at this price should have USB-C to make it even more worthwhile.

You also get a pair of 5-watt speakers with DTS on this monitor so it performs much better than similar offerings with weaker setups. The pair can be used for casual gaming and media consumption even if the bass they offer is still limited. Headsets will always be better for competitive gaming, but it is nice to have a capable secondary for other purposes.

The boasts a 25-inch Fast IPS panel with a 1920 x 1080 resolution, a 360Hz refresh rate, and a 0.5ms boosted response time. The backlight has a 400 cd/m2 maximum while the contrast ratio is listed at 1000:1 like most IPS monitors. This model is HDR400 certified, but we all know how limited that is when it comes to visual improvements.

1080p monitors are very common in schools or at work, but they are also widespread for competitive gaming use. It’s rather easy to run games at extra high framerates, plus visibility and legibility are also excellent. It is far easier to see opponents from a distance and there are a lot of GPUs that can reach the 360Hz limit in E-Sports titles like CSGO.

The AOC AGON AG254FG reached 97% sRGB and 70% DCI-P3 which is a bit short of the 110% and 86% claim for the respective gamuts. That’s still fine for competitive gaming use, but what’s most impressive about it is its superb accuracy out of the box which only had a deltaE of 0.77. Most users won’t need to calibrate it, plus it’s already ready for editing or content creation.

Calibrating it reduced the dE average to 0.36 which is even better for professional use than the default score. However, you will need a colorimeter to help with refining the accuracy further since no amount of copying settings from reviewers will guarantee results like this due to panel differences. It is not worth it for us unless absolute color fidelity is your bread and butter.

The AOC AGON AG254FG’s backlight peaked at 431 cd/m2 at 100% brightness so it can fight off a decent amount of glare. Its contrast reached a decent 1202:1 at 50% brightness, but it was still unable to produce deep blacks like VA or OLED panels. Its HDR 400 feature didn’t much to improve the latter, so you must look to the mini-LED equipped variants for that.

Panel uniformity for the AG254FG sample was excellent since there were no major issues such as backlight bleeding or clouding. The illumination’s spread has some variance from the center, but it’s only noticeable when the screen is canned by the colorimeter. Note that this can change between every unit due to manufacturing tolerances, so it’s entirely possible to get one with some faults.

Pixel responsiveness is the biggest strength of the AOC AGON AG254FG and its 360Hz Fast-IPS panel. You only need to use its Weak overdrive setting to clean up the very minor persistence since anything higher will start to introduce overshoot. You can also use ULMB with G-Sync with the 144Hz and 240Hz modes, but many gamers will be happy with the basic setup.

The AOC AGON AG254FG is a G-Sync monitor, but it is also compatible with AMD FreeSync for AMD GPU owners. This model also has Nvidia’s Reflex Latency Analyzer feature which lets you determine your setup’s speed and performance. Input lag sits under 3ms at 360Hz, so there is no need to worry about delays while gaming.

Thoughts on the AOC AGON AG254FG’s

The AOC AGON AG254FG is a fantastic choice if you want a fast and color-accurate gaming monitor for E-Sports. Its Fast IPS panel isn’t the most vibrant, but it has one of the best imaging scores we’ve seen in the 360Hz segment. It also has a host of features that you can play around such as the RGB lighting which lets you play around with your setup’s aesthetics.

However, it’s quite expensive for a 1080p monitor so not everyone is going to spend that much just to enjoy the benefits of the 360Hz output. Its HDR performance is disappointing as expected, so saving up for the mini-LED AGON variants might be a better alternative.