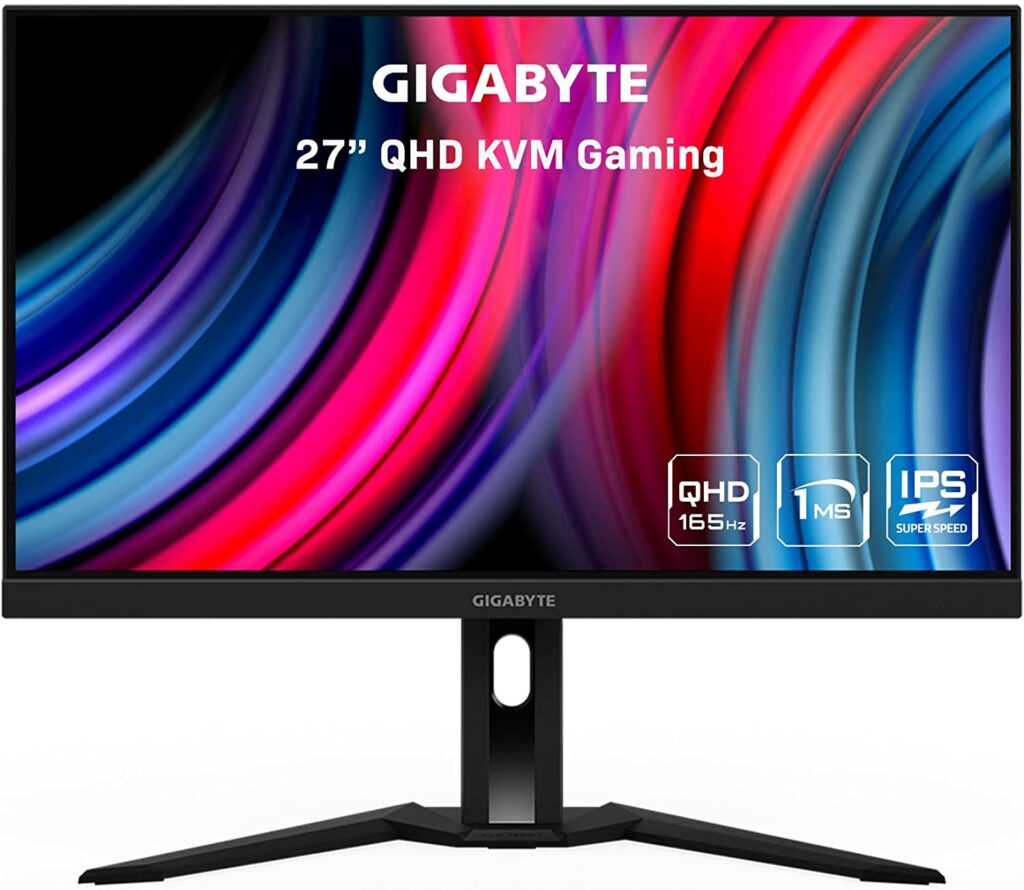 The Gigabyte M27Q P offers an improved IPS panel while retaining all the things we love about it. Most of the specifications are also unchanged, but this new variant now uses an LG IPS panel compared to the Sharp unit on its predecessor. Let’s see if the Gigabyte M27Q P is worth it even if it has a price increase over the M27Q. 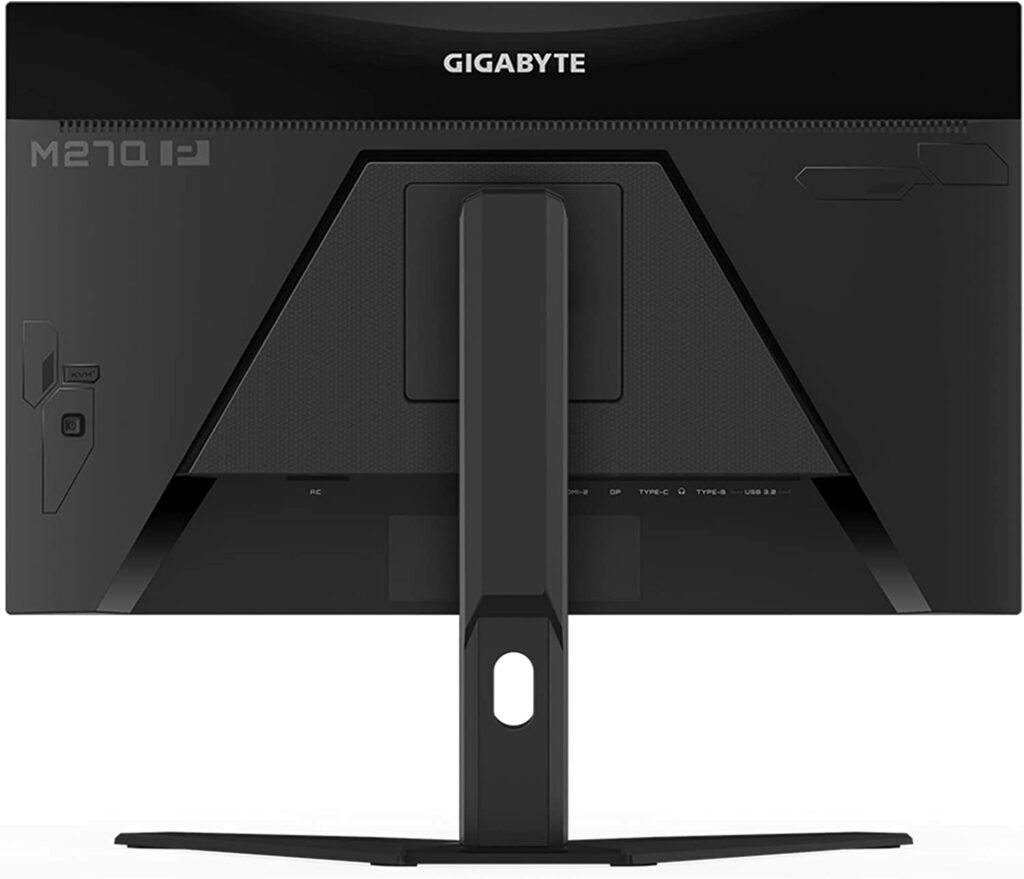 Not much has changed with the Gigabyte M27Q P’s overall aesthetic, but it does have a bigger stand this time around. It is still finished in matte black which makes it look like an office display, but we know many of you prefer it that way. The display is bezel-free on three sides, but you still have inner borders which become visible when the screen is turned on.

It’s not a gigantic monitor by today’s standards, but its footprint increased because of its redesigned stand. Most won’t have trouble with placing it on a tight desk, but you might want to upgrade that too if you are planning on more than one display. It weighs 14.77 pounds so it’s still portable if in case you want to bring it to a tournament or a LAN party.

Its build quality doesn’t seem like it was downgraded, so you are still going to get a decently robust gaming monitor. The plastic panels used are thick and sturdy, plus there were no cosmetic defects that usually happen during careless manufacturing. The included stand is firm and stable, but it can wobble if you accidentally strike the screen. 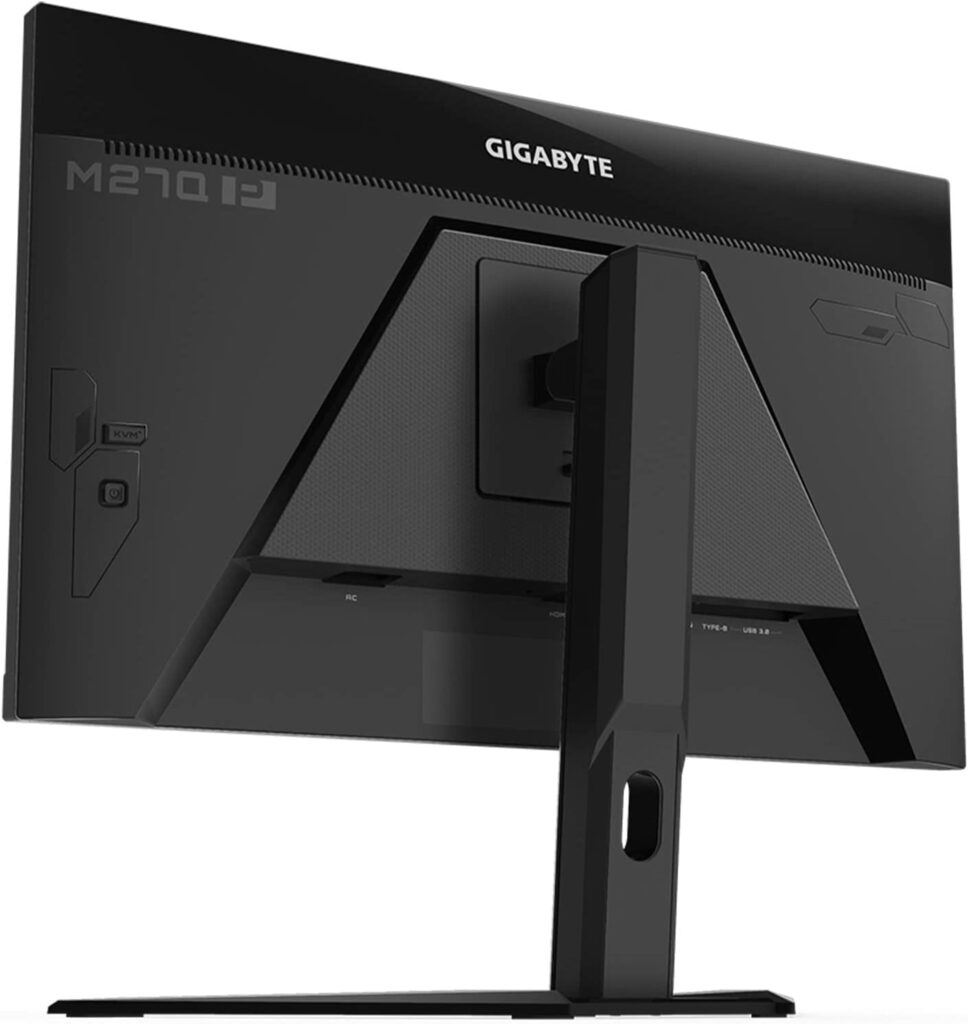 The Gigabyte M27Q P has an OSD joystick and a dedicated KVM button at the back for easy access. You can also use the brand’s OSD Sidekick up which adds more convenience since it lets you access some settings directly inside your OS. Premium variants even go as far as including remotes, but that’s mostly unnecessary for desktop use.

The stand included with this monitor only offers tilt and height adjustments, but that’s more than enough for most gaming setups. It is not ideal for a multi-monitor setup, but you can use VESA mounts if you need more flexibility. However, it’s not worth the spend for single screens since it’s already easy enough to get a comfortable angle with the stock setup.

The Gigabyte M27Q P’s connectivity layout is great for a budget-oriented model. You get DisplayPort 1.4, two HDMI 2.0 ports, and a USB-C slot with DP Alt mode. It only puts out up to 18 watts of power so you can’t expect your USB-C laptop to charge while it’s docked to the monitor. You also get two USB 3.0 ports for your mouse and keyboard and a 3.5mm jack for headphones.

It also has a pair of 3-watt speakers now unlike some of the variants in Gigabyte’s lineup. The bad news is that they are quiet and incapable of the sound quality that you’d want for gaming, so they will only see us as a secondary option. That’s okay in our opinion simply because it is always nice to have more features at a lower price point.

The Gigabyte M27Q P sports a 27-inch IPS panel with a 2560 x 1440 resolution, a 170Hz maximum refresh rate, and a 1ms response time. The backlight has a 400 cd/m2 maximum while the contrast is still listed at 1000:1 like most IPS panels. This model is certified with VESA HDR 400 capabilities, but we all know how limited that is when it comes to HDR performance.

The most significant upgrade with this new model is its LG IPS panel which uses an RGB subpixel layout. The older model uses a BGR panel from sharp, although keep in mind that there isn’t anything wrong with that, to begin with. Using a panel with an RGB layout solves the fuzzy text issues on the older model, plus LG’s offering has a higher gamut coverage rating than the predecessor.

The Gigabyte M27Q P renders more than 100% sRGB and a whopping 98% DCI-P3 coverage which makes it one of the most vibrant in its category. Its default accuracy isn’t the best with a deltaE average of 2.67, but that’s mostly because of the extra vibrancy. Most users won’t need to calibrate it, especially since it has a dedicated sRGB mode with a very low 0.98 dE average.

Calibrating it reduced the dE average to 1.07 which is considerably better and more accurate than the predecessor. LG’s panels are better in this regard, so those who are into editing or content creation should pick this model over the M27Q. the downside is that you will need a colorimeter to tweak it like this, and those aren’t cheap or readily accessible.

Its backlight reached 433 cd/m2 at 100% so it offers plenty of adjustment range depending on your environment. However, its contrast is unremarkable since it is limited to 977:1 at 50% brightness. The monitor is rich and vibrant, but it drops the ball in dark scenes or all black images like most IPS monitors.

Panel uniformity for the M27Q P sample was great since there were no major backlight leaks or clouding issues. There is some variance in the backlight’s spread, but it was only noticeable when the screen was scanned with a colorimeter. This can change with every panel since there are manufacturing tolerances for the panels, so it’s possible to get a perfect or worse unit.

The Gigabyte M27Q P’s pixel response time is slightly better than its predecessor if you can keep framerates high. We recommend using the Balance setting of its overdrive, but you should switch it to quality if you go below 120Hz or lower. The monitor isn’t the fastest in the market in this metric, but it is still suitable for E-Sports use.

The Gigabyte M27Q P is compatible with both FreeSync and G-Sync so you don’t have to worry about tearing and stuttering. Choosing a dual-compatible monitor is the best method now so you don’t get stuck with one GPU brand because of Adaptive-Sync exclusivity. Input lag sits at 4ms at 170Hz so it’s snappy and responsive enough for competitive play.

Thoughts on the Gigabyte M27Q P

There’s very little to complain about with this new model since it is indeed better than its predecessor. But we’d still like to see more upgrades like a more potent USB-C slot, although we understand that adding them may affect the price. The Gigabyte M27Q P is one of the best budget options you can buy right now at the $400 price point.