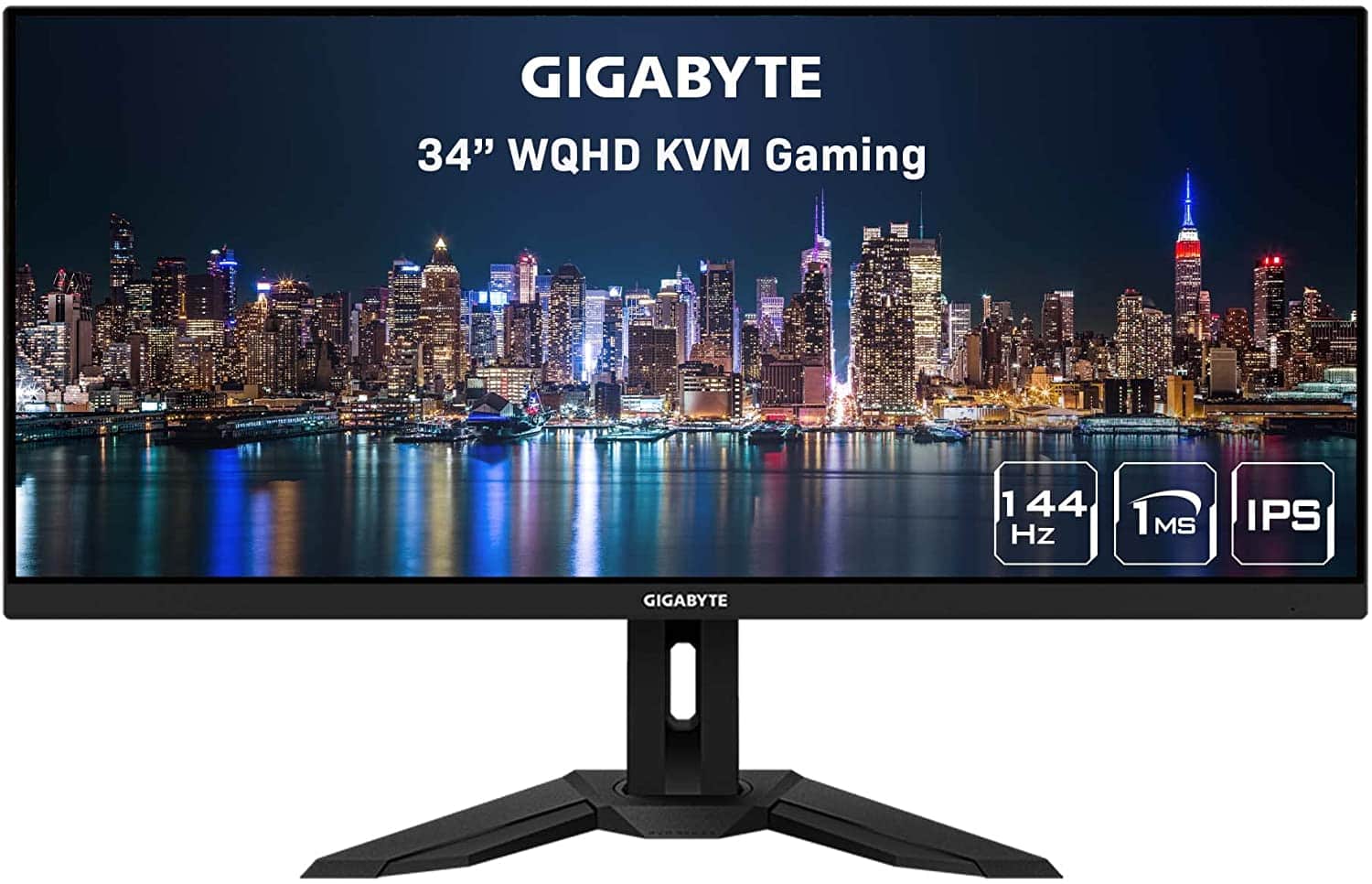 The Gigabyte M34WQ is the better-equipped version of the G34WQC that’s designed for both gaming and productivity. It also has a flat IPS  screen this time around, versus the 1500r curved VA panel of the previous model which offered more contrast. Let’s see if the Gigabyte M34WQ is the better buy for a bit more cash versus its VA-based counterpart. 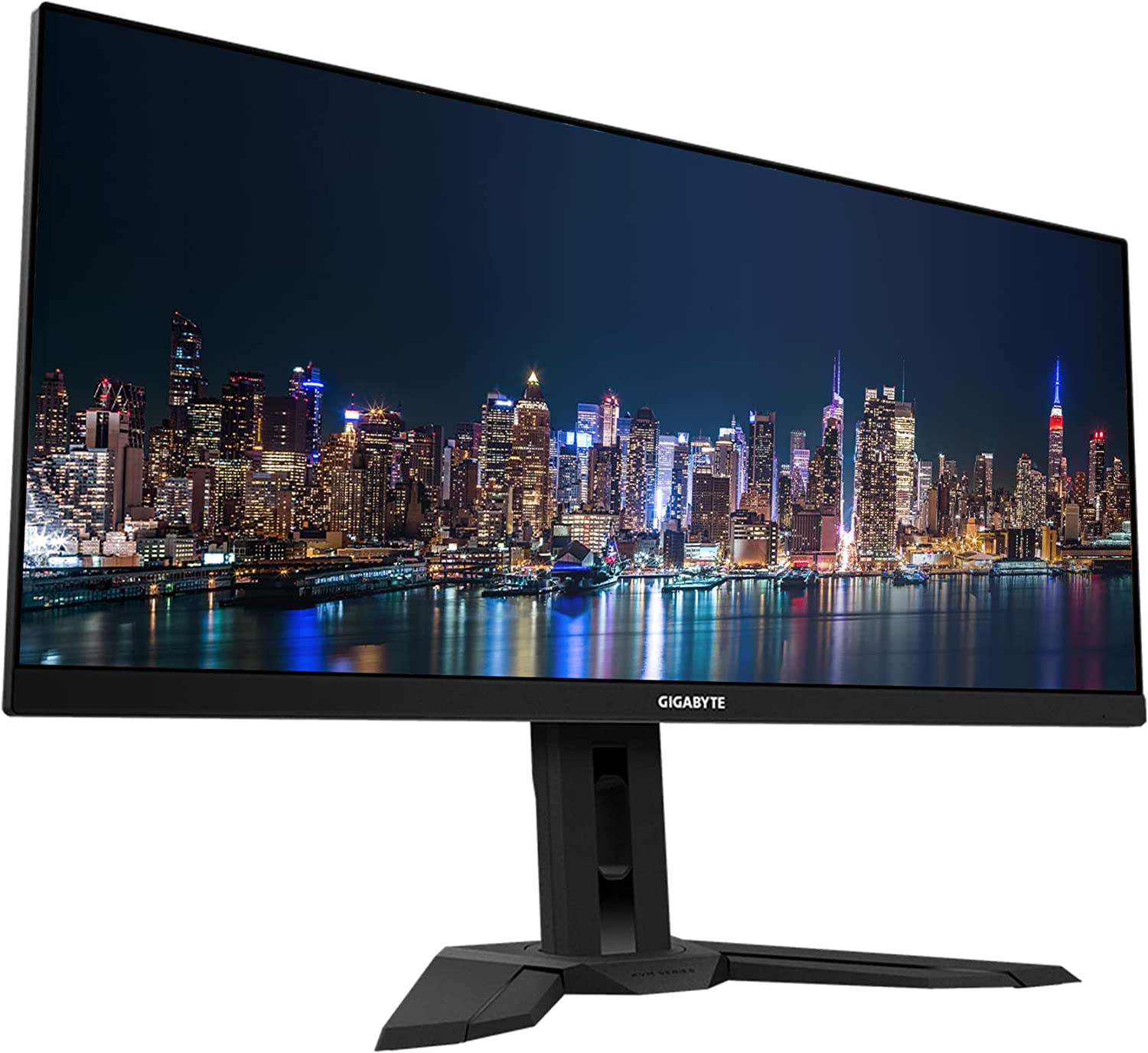 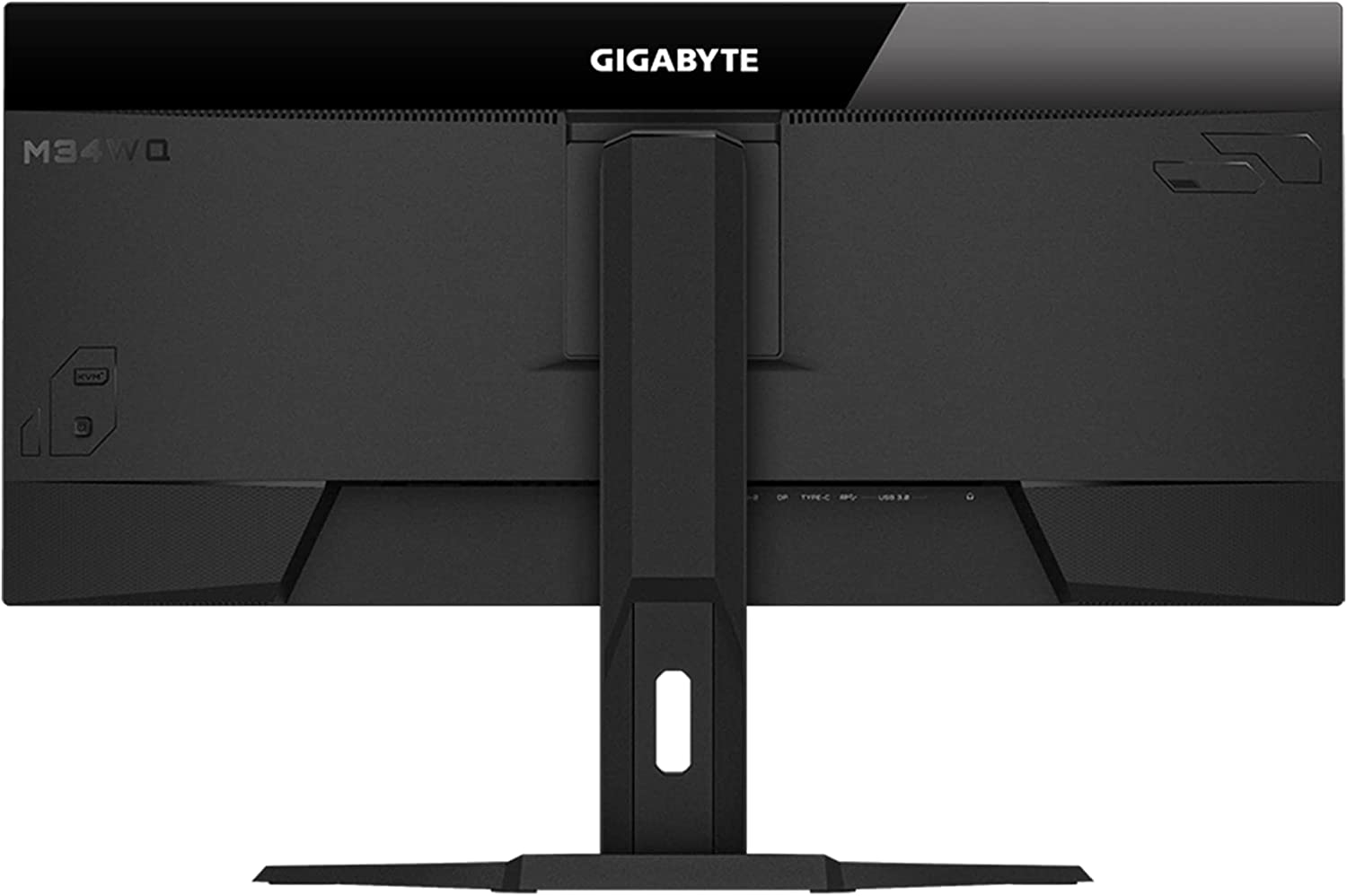 The Gigabyte M34WQ sports a simple, office attire aesthetic, unlike its Aorus-branded counterparts that have RGB and aggressive accents. It has a matte black aesthetic that is easy to clean and protect against dust and scratches. The display is bezel-free on three sides, but you will still see inner borders when it’s in use.

You have to consider the Gigabyte M34WQ’s size if you are new to ultrawide monitors. It stretches almost three feet wide, so it may push off your other big peripherals like bookshelf speakers. its 20.53-pound weight might not be much, but it’s really easy to tip it over when you are assembling and placing it on your desk.

The Gigabyte M34WQ is mostly made out of plastic, but it has decent build quality so it feels solid overall. The plastic panels are thick and sturdy so you don’t have to worry about cracks or flexing if you handle the monitor correctly. The included stand is firm and stable even if it wobbles a bit due to the weight of the cabinet or when you accidentally nudge the screen.

The Gigabyte M34WQ has an OSD joystick at the back for easy access to its features and settings. It’s easy to get to a specific submenu and it takes less time to calibrate the monitor compared to those with buttons. This model even works with Gigabyte’s OSD Sidekick which lets you adjust its settings with your mouse and keyboard.

The stand included with the Gigabyte M34WQ offers tilt, swivel, and height adjustments for your convenience. Pivoting isn’t included since ultrawide monitors were not meant for portrait mode anyway. You can opt for a VESA mount, but it’s only necessary if you have multiple screens or if desk space is limited.

What makes the Gigabyte M34WQ better than its VA -based predecessor is its connectivity layout. You get a DisplayPort 1.4 slot, two HDMI 2.0 ports, and a USB-C slot that supports DP Alt Mode. It can only provide 15 watts of power so you will still need your USB-C laptop’s power adapter to keep it from draining its battery.

This model, like the Gigabyte M27Q, features KVM functionality to maximize its USB-C and its capabilities. KVM allows you to swap between sources seamlessly without needing to plug and unplug cables. There is a KVM hotkey at the back near the joystick so you don’t have to sort through the OSD to use this feature.

You also get three USB 3.0 ports and a 3.5mm jack for your peripherals, along with a pair of 3-watt speakers. the latter isn’t powerful enough for gaming or entertainment, but it’s always nice to have extra features. They can be useful for other purposes such as work-from-home setups or something as simple as keeping your desk clutter-free.

The Gigabyte M34WQ boasts a 34-inch flat IPS panel with a 3440 x 1440 resolution, a 144Hz refresh rate, and a 1ms boosted response time. The backlight has a 400 cd/m2 output while the contrast ratio is listed at 1000:1 like most IPS panels. This model is HDR 400 compatible, but it is limited in terms of performance and improvements in image quality.

34-inch ultrawides are as good as the 27-inch 1440p variants when it comes to sharpness and visibility. You get a massive upgrade in pixel count and crispness, but it’s still easy to read walls of text or process documents. It’s one of the best options for both immersive gaming and productivity, and it’s not as demanding as 4K when it comes to graphics processing and framerates.

The Gigabyte M34WQ renders 100% sRGB and 88% DCI-P3 for excellent vibrancy in games and movies. Its default accuracy is excellent since the deltaE average is only at 2.19 which hits the ideal average. Most users won’t need to calibrate it apart from adjusting settings like brightness for eye safety and comfort.

Calibrating the Gigabyte M34WQ reduced its deltaE average to an impressive 0.48 which is something you’d see on a prosumer variant. The downside is you need a colorimeter to guide your adjustments and get a profile that is as accurate. It’s not worth it for gaming since the gadget is expensive, so only spend the extra on it if you are into color-critical work.

Its backlight only managed to reach 381 cd/m2, even when the monitor receives an HDR signal. Its contrast reached 1055:1 at 50% brightness, unlike its VA counterpart which reached a little over 4000:1 at peak. The screen has excellent color quality, but blacks or dark scenes look grayish and washed out due to this limitation.

Panel uniformity for the Gigabyte M34WQ had some minor issues due to light leaks at the top and bottom edges of the screen. This shows up as clouding in dark images, but it is not as much of an issue in full-color images. This can vary between every monitor made due to tolerances and the nature of IPS technology, so there are worse and better units out there.

The Gigabyte M34WQ has an excellent pixel response time like most modern IPS gaming monitors. You don’t need to max out its overdrive setting since it barely shows any blurring or persistence. The best option is its Picture Quality setting since it’s the most balanced and it doesn’t add overshoot to the image.

The Gigabyte M34WQ is compatible with FreeSync and G-Sync so you can enjoy VRR no matter which GPU brand you use. it’s important to have this kind of flexibility since the GPU market is unstable, so getting a specific card from AMD or Nvidia might not be easy. Input lag sits at 4ms at 144Hz, so there is no need to worry about delays while gaming.

Thoughts on the Gigabyte M34WQ

The Gigabyte M34WQ is a well-priced ultrawide IPS monitor that works great for gaming and productivity. Its IPS panel is capable of great colors and sharpness, although it has the usual weakness of limited contrast. It’s not as flashy as the Aorus variants, but it is functional and practical for all types of use.

There’s very little to complain about, especially since the Gigabyte M34WQ only costs below half a grand at the time of review. Fast ultrawide IPS gaming monitors used to cost over a thousand, so this is a huge leap in performance per dollar for the consumer. It’s one of the best ultrawide monitors you can buy now, and we highly recommend it.

Search
You are here: Home / Reviews / Gigabyte M34WQ Review – 1440p Ultrawide IPS Gaming Monitor with USB-C
This website uses cookies to improve your experience. We'll assume you're ok with this, but you can opt-out if you wish.Accept Read More
Privacy & Cookies Policy