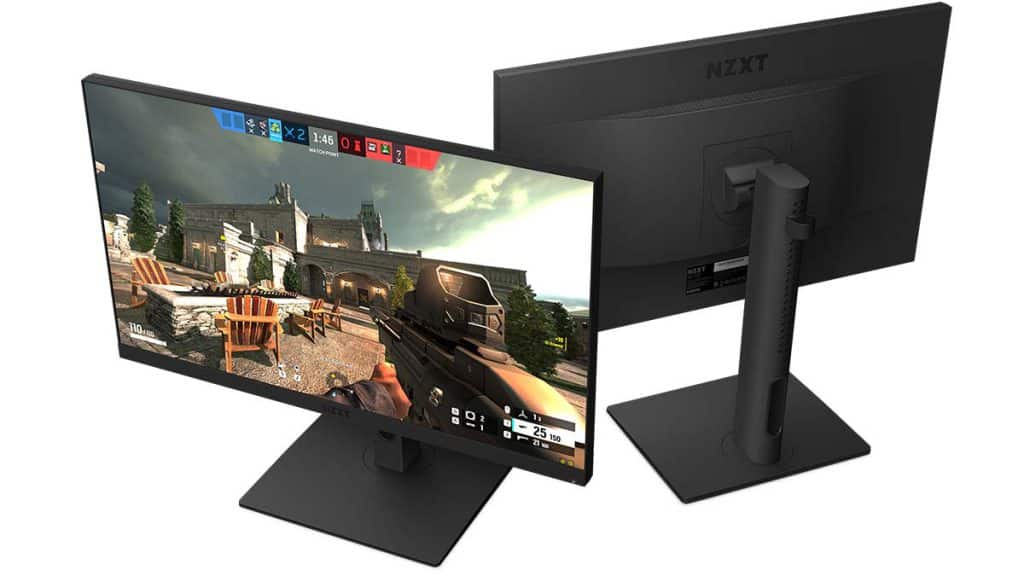 The NZXT Canvas 27F is an attractive gaming monitor that’s priced right and quite capable for enthusiast-level gaming. It is more affordable than the 27Q and 32Q, but it trades having a higher resolution for a faster 240Hz refresh rate. Let’s see if the NZXT Canvas 27F is more than just a meek intro from the renowned PC case and DIY parts brand. 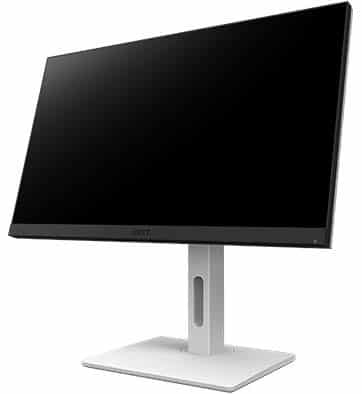 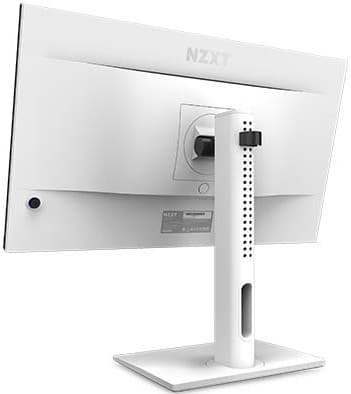 The NZXT Canvas 27F has a sophisticated modern aesthetic that matches the brand’s identity. You can choose between matte white or black for the chassis and stand or mix and match if you order via NZXT’s website. The display has a frameless design, but it still has panel borders like most modern displays.

It’s a 27-inch model, but the monitor has modest proportions compared to its closest alternatives or competitors. The device needs 8.77 inches of depth from your desk, so it won’t be too obstructive even if you go with the regular stand. The monitor is lightweight at 13.4 pounds, although you can shave off more heft and cost if you order the panel only.

The product’s build quality isn’t far off from what the brand’s other offerings bring to the table. The plastics used are thick and sturdy, plus every piece was molded to perfection to virtually eliminate cosmetic defects. The stand is firm and stable, so the screen won’t sag or shake while you enjoy your favorite titles.

he NZXT Canvas 27F has an OSD joystick, just like most premium counterparts, for your convenience. It’s at the back, but you can easily reach it without leaning in since it’s near the right-hand side of the display. You can also use NZXT CAM for this monitor to access some of its features, but we think the joystick is more than enough in most cases.

The stand included in the package offers tilt, swivel, pivot, and height adjustments for your comfort and convenience. You can also order the monitor without the stand or with a VESA mount instead, but that customization is only available if you buy directly from NZXT. Our only issue with this setup is the VESA mount’s steep $99.99 price tag since you can get a regular alternative for far less.

Another thing that makes the NZXT Canvas 27F attractive is its connectivity layout. You get DisplayPort 1.2, two HDMI 2.0 slots, and a USB-C slot that supports DP Alt Mode. However, it doesn’t provide charging power for laptops, so you can’t dock your MacBook or anything similar via a single USB-C cable.

You will find two USB 3.0 slots and a 3.5mm audio port with the monitor. However, there is no KVM functionality to maximize all that, plus there are no built-in speakers with it. The latter is okay since gaming audio is much better if it comes out of a gaming headset or desktop speakers.

1080p isn’t as popular when the monitor has a 27-inch diagonal simply because it’s less crisp than the more common 24-inch variants. However, we know that some E-Sports fanatics prefer it simply because visibility and legibility are better. Images and graphics aren’t as sharp, but it’s easier to see tiny or distant objects even if they appear pixelated or fuzzy in some instances.

The NZXT Canvas 27F renders more than 100% sRGB and 79% DCI-P3, which are decent if it’s coming from an affordable IPS monitor. What’s great about this product is its default accuracy which only had a deltaE average of 1.51. It looks like the monitor was factory calibrated, so you don’t have to tweak it and go straight to your games.

Calibrating the monitor manually did not yield an improvement, warranting the need for a colorimeter. The resulting deltaE average after this treatment dropped the dE average to 1.35, so there is no visible improvement. Using the default setting plus a few basic adjustments is more practical, especially if you only use the monitor for gaming.

The NZXT Canvas 27F’s backlight reached a healthy 421 cd/m2 at 100% in SDR, while it is HDR mode increased that to 469 cd/m2 in some instances. However, that isn’t enough to push the contrast beyond the 1105:1 result we saw, indicating that the screen is still incapable of deep blacks like its VA counterparts.

Panel uniformity for the test sample did not have any issues like major backlight bleeding or clouding. There is some variance in the backlight’s spread, but it was too little to notice unless you stare at an all-black image with the display. Note that this can change with every monitor made due to tolerances, so there are units with worse symptoms out there.

Another excellent characteristic of the NZXT Canvas 27F is its pixel response time which did not allow blurring to become noticeable. There is still some persistence in fast-paced and contrasting transitions, but it wasn’t noticeable most of the time. You don’t need to utilize its overdrive, so the monitor is great for E-Sports or competitive applications.

Lastly, the NZXT Canvas 27F is compatible with FreeSync and G-Sync, so you can always avoid tearing and stuttering. Having compatibility for both is a must-have feature, so you don’t have to ditch the screen if you want to switch between the two GPU giants. Its input lag sits at 3ms at 240Hz, so the monitor is as fast as the best 240Hz options out there.

Thoughts on the NZXT Canvas 27F

The NZXT Canvas 27F is a fantastic choice if you want premium quality and high-end performance at a reasonable price. We love the monitor’s design and level of customization since it allows the user to match the monitor to his or her build or preferences. We’re also happy with the inclusion of USB-C connectivity, even if it doesn’t offer docking capabilities.

Our only issue with the NZXT Canvas 27F, aside from its weak HDR performance, is the price of the mounting options. Asking $99.99 for a VESA mount is too much, especially if you know that your customers would rather have matching hardware for aesthetic value. However, there is always room for improvement, so NZXT’s future in the monitor market looks promising.

Search
You are here: Home / Reviews / NZXT Canvas 27F Review – Affordable 240Hz Gaming Monitor with HDR 400 – Highly Recommended
This website uses cookies to improve your experience. We'll assume you're ok with this, but you can opt-out if you wish.Accept Read More
Privacy & Cookies Policy