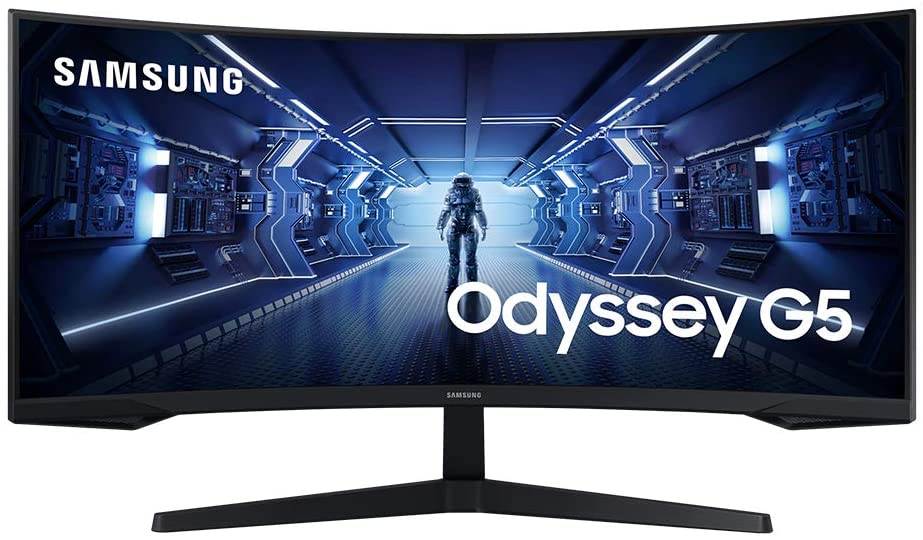 The Samsung LC34G55T is a reasonably-priced Odyssey G5 monitor that offers immersion and smooth visuals with its 165Hz ultrawide display. The Odyssey line was launched with premium options like the G9 super ultrawide, so we’re glad to see affordable alternatives that can offer the same quality. The Samsung LC34G55T faces tough competition based on its price, so let’s check out what kind of advantages it can offer. 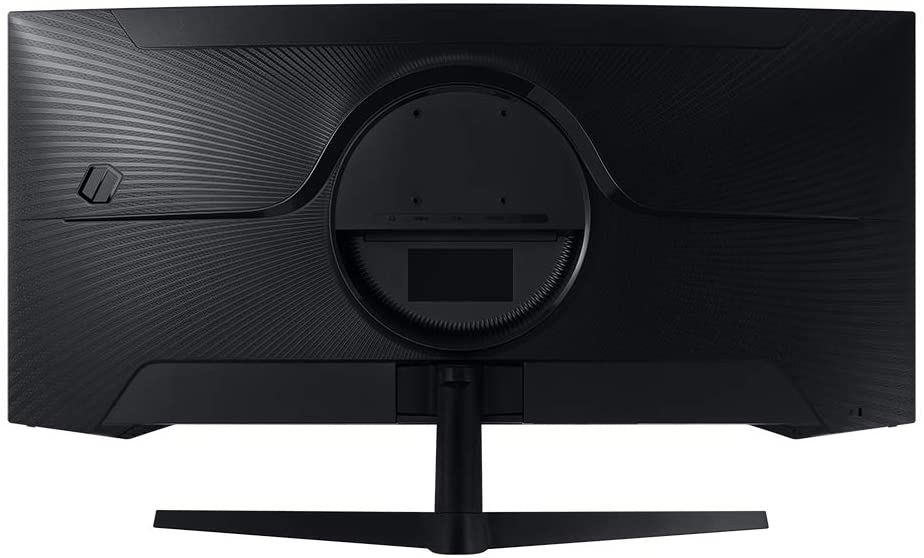 The Samsung LC34G55T follows the same aesthetics as the rest of the Odyssey line minus the white-colored G9 variant. The monitor has a distinct matte black finish with a carbon fiber-like texture at the back which gives it its clean and modern look. The front is bezel-free on three sides but you will still see inner borders when it’s in use.

You have to take note of the Samsung LC34G55T’s size since it requires a bit of depth from your desk. It requires almost a foot when assembled, and it’s almost 32 inches wide even if its curve is more pronounced. It’s not as heavy as monitors like the Gigabyte G34WQC, but it still isn’t portable since it’s bigger than your usual office display.

The Samsung LC34G55T’s build quality is decent even if it uses a lot of plastic due to its budget-oriented nature. The chassis itself looks refined and durable, but we can’t say that the stand is the same. It has a slight wobble and it’s quite stiff to tilt upward, so some users might want to use VESA mounts instead.

You also don’t get extras with the Samsung LC34G55T such as RGB lighting or sensors which are available on the brand’s top-tier offerings. However, that isn’t entirely a loss since you can still get the most out of the monitor without them. They add cost anyway, so this model will belong to a higher price bracket if it did include some eye candy.

It’s great that the Samsung LC34G55T already includes a joystick that’s located just under the Samsung logo on the bottom bezel. It’s easy to access and use, so you won’t have trouble trying to adjust the screen on the fly. Samsung implements this on almost every monitor they offer and we wish every brand would follow suit.

The Samsung LC34G55T’s stand only offers tilt so some users, especially the taller ones, might be disappointed. You only have to center the monitor so swivel and pivot aren’t necessary, but vertical ergonomics will always come in handy. You can opt for VESA mounts, but those will add more cost to your upgrade. 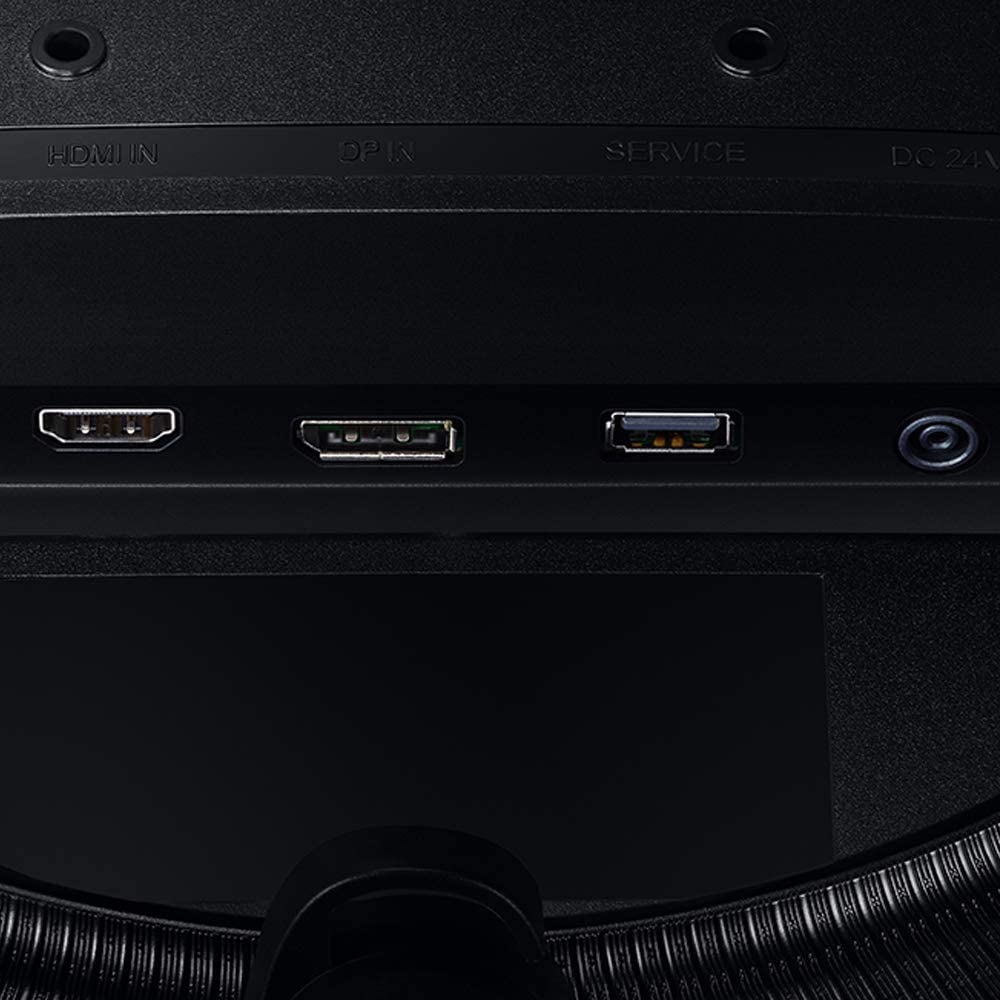 The connectivity layout on the Samsung LC34G55T is basic as well since it only offers a slot each for DisplayPort 1.4 and HDMI 2.0. you also get a 3.5mm jack for audio equipment, but there are no USB ports for accessories or peripherals. It’s normally forgivable for budget monitors, but this option costs considerably higher than its closest competitors.

The Samsung LC34G55T also doesn’t have speakers which you can use as a secondary for purposes other than gaming.  But this omission is ok since immersive gaming monitors like this demand the use of headsets or surround speakers to achieve the full effect.

The Samsung LC34G55T sports a 34-inch curved VA panel with a 3440 x 1440 resolution, and a 1ms MPRT response time. The backlight is listed at 250 cd/m2, while the contrast ratio is modestly specified at 2500:1. The screen has the same 1000R curvature as the other Odyssey gaming monitors which makes it great for gaming but somewhat distorted for productivity tasks.

1440p monitors offer the best balance between sharpness and visibility, so they are great all-rounders. Ultrawide QHD monitors like the Samsung LC34G55T are excellent for immersive gaming and multitasking, but those with deep curves can sometimes look distorted, especially for editing or CAD-related tasks. It’s also noteworthy that you are going to need a meaty GPU for this monitor if you want high framerates with the latest titles.

The Samsung LC34G55T produces 99% sRGB and around 77% DCI-P3 which isn’t the best, but sufficiently good for gaming and daily use. The monitor’s default tuning is goo as well since the deltaE average is limited to 1.41. there is a very slight bluish tint on the screen, but it won’t be an issue for most users unless they do some editing work.

Calibrating the Samsung LC34G55T can make it suitable for color-critical tasks since the dE average improved to 0.48. that’s a score you don’t regularly see on gaming screens, but a colorimeter was used to achieve it. Most users will be fine with the default setting plus minor backlight adjustments, so spending the extra on the gadget is unnecessary.

The Samsung LC34G55T’s backlight reaches 301 cd/m2 and it can pump it up to 330 cd/m2 when it detects an HDR10 signal. That’s not great for HDR performance, but its contrast ratio peaked at 4610:1 at 60% brightness. It doesn’t fare well in well-lit rooms with plenty of glare, but it’s capable of deep and oily blacks, especially when used at night.

Panel uniformity for the Samsung LC34G55T is decent and acceptable, although there are some light leaks at the top and bottom edges of the screen. They are not noticeable most of the time, but dark or all-black images can reveal them. This flaw is common on curved displays, but it varies between every unit made.

The Samsung LC34G55T’s response time is superb for the panel type, although it isn’t perfect especially in dark transitions. Some minor persistence and smudging can happen in select sequences, so setting the overdrive to its maximum level is your best option. High-speed imaging will still capture some trails, but it won’t be an issue for the naked eye.

The Samsung LC34G55T is a FreeSync variant, but it also works with Nvidia’s G-Sync Compatible mode. Take note that you need to use its DisplayPort slot since Adaptive Sync is either buggy or not working at all with the HDMI port. Input lag sits at 4ms at 165Hz, so there are no delays or de-synced instances while using the monitor.

Thoughts on the Samsung LC34G55T

The Samsung LC34G55T offers a very promising screen that engrosses you with its size and smoothness. It doesn’t offer the best gamut coverage in its category, but its color accuracy is already great right out of the box. You can also expect deep blacks and saturation with this model thanks to its contrast, especially while gaming at night.

However, the Samsung LC34G55T doesn’t present the best value when compared against monitors like the Gigabyte G34WQC or the AOC CU34G2X. This model has a slight advantage in refresh rate and a deeper curve, but it loses out on vibrancy and features. It’s great for gaming, but you are better off saving the money on the two aforementioned models even if they only offer 144Hz.

Search
You are here: Home / Reviews / Samsung LC34G55T Odyssey G5 Review – Affordable 165Hz Ultrawide Gaming Monitor
This website uses cookies to improve your experience. We'll assume you're ok with this, but you can opt-out if you wish.Accept Read More
Privacy & Cookies Policy