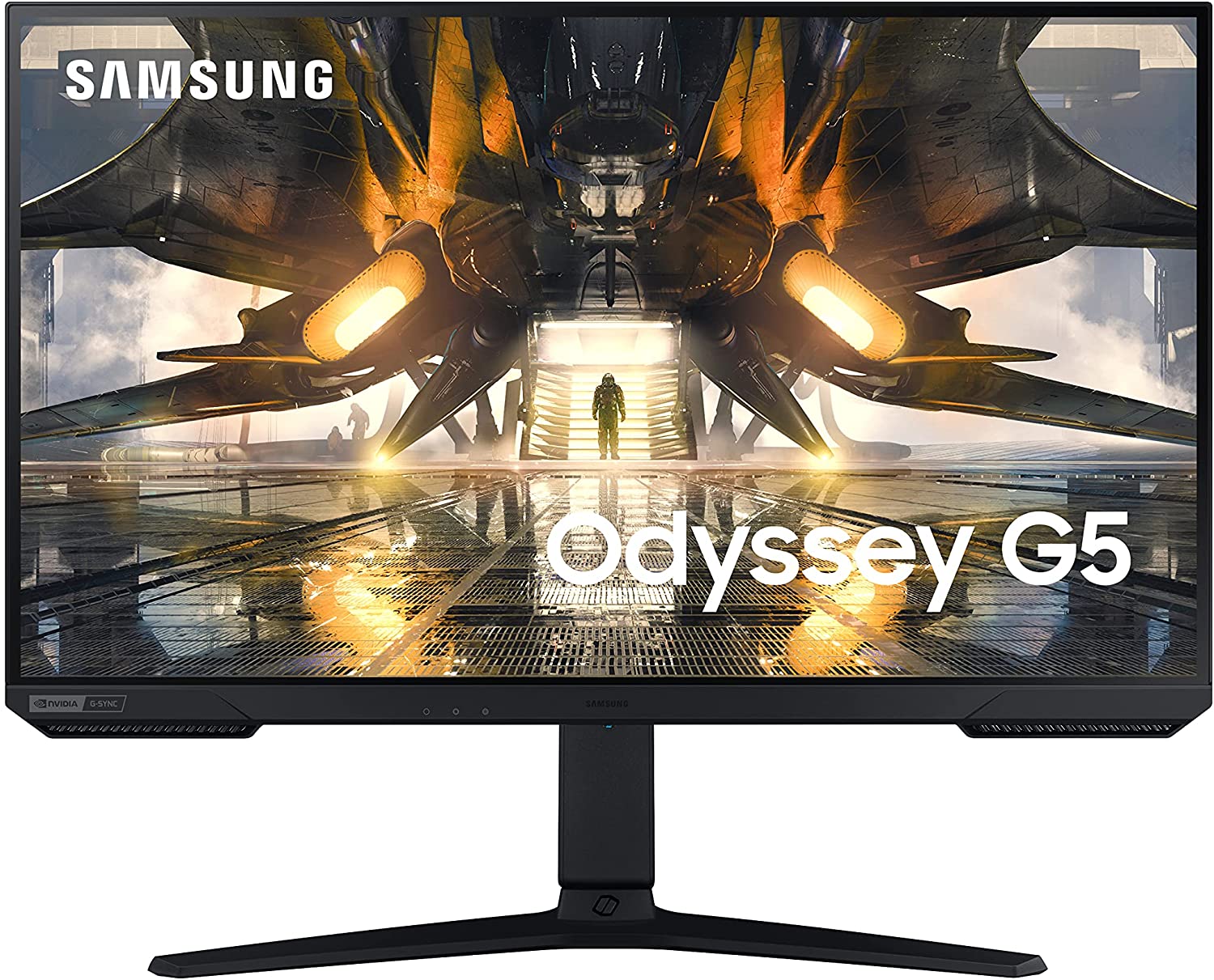 The Samsung Odyssey G5 S27AG50 puts a twist on the Odyssey gaming lineup with a different design and a new panel type. This model uses IPS unlike most of the Odyssey line up which has 1000r curved VA panels. Let’s check and see if the Samsung Odyssey G5 S27AG50 can climb the ranks of the highly competitive 1440p IPS segment for a larger share of the gaming display market. 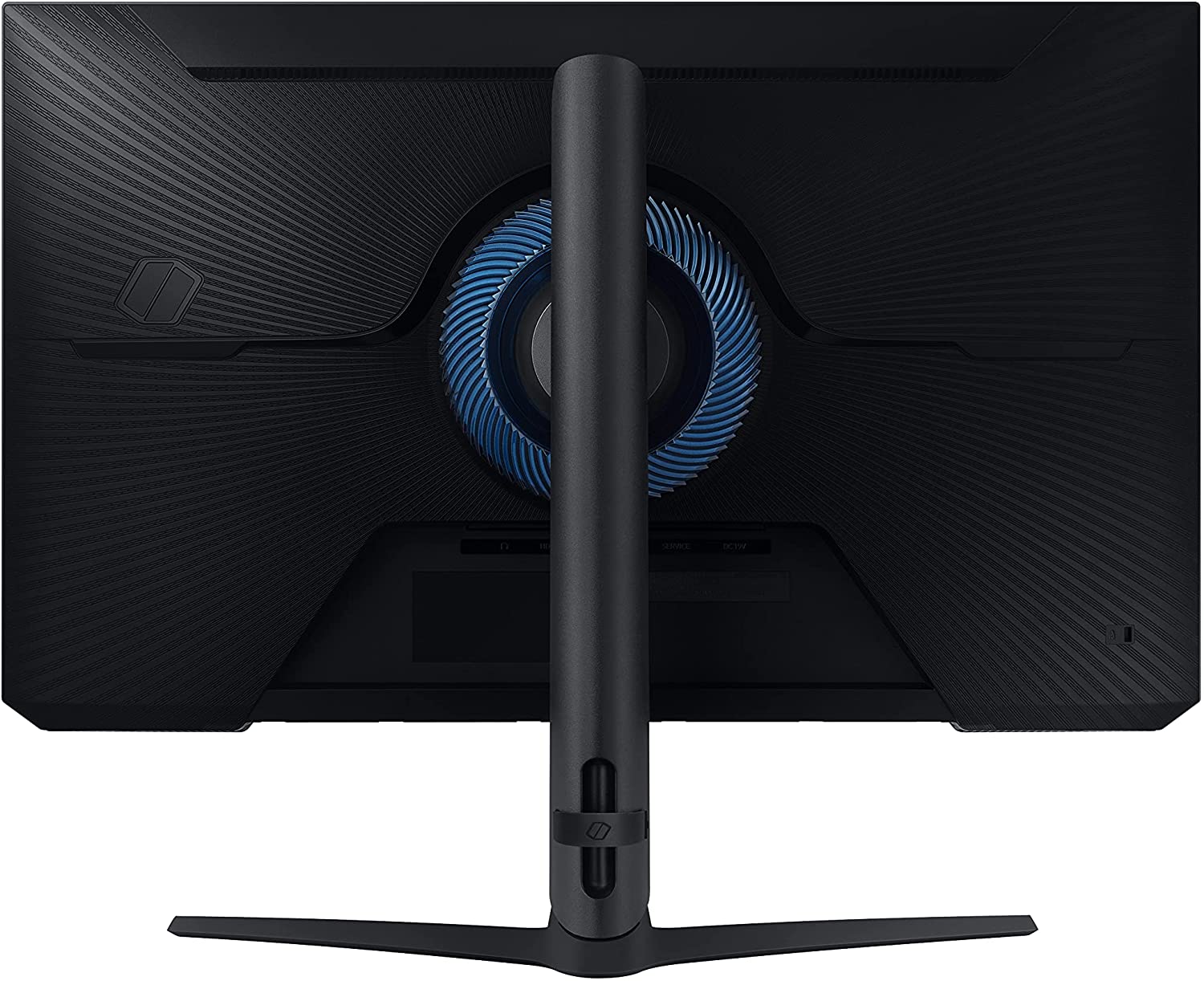 The Samsung Odyssey G5 S27AG50 uses the new look but without the RGB LEDs on the high-end G7 S28AG70. The monitor has a matte black finish with a clean carbon fiber-like finish at the back so it will always look good. The display is bezel-free on three sides, but you will still see minimal inner borders when it’s in use.

the Samsung Odyssey G5 S27AG50 isn’t larger than any other 27-inch monitor, so it should fit nicely into your setup. It needs less than ten inches of depth, so it shouldn’t bump off your other peripherals unless you have a really tiny desk. It also only weighs 13 pounds, so it should be easy to carry around for LAN parties or for rearranging your setup.

Its build quality is also very good even if it’s a mid-tier model in this year’s Odyssey gaming monitor lineup. The plastics used are sturdy so you won’t have to worry about cracking or catastrophic flexing with normal use. we didn’t see any cosmetic defects while the stand is firm and stable so there isn’t any wobbling of any sort.

The Samsung Odyssey G5 S27AG50 doesn’t have RGB LEDs as mentioned so the ring at the back is purely decorative. The vents at the bottom bezel do not have lights as well, but those can be distracting for some. It still looks good, but what’s best about not having RGB lighting is it’s cheaper than those with it.

You will find an OSD joystick and three function buttons under the bottom bezel of the Samsung Odyssey G5 S27AG50. This makes it easy for anyone to tweak the monitor or use its additional features even if they are in the middle of a game. Other manufacturers have implemented application control or even added remotes, but what this monitor has is already enough.

The stand included with the monitor offers tilt, swivel, pivot, and height adjustment for your convenience. It’s easy to get a comfortable viewing angle and you can rest assured that the screen will not sag unless you adjust it again. It is compatible with VESA mounts, but it’s only necessary if your desk space is limited or if you have multiple monitors on deck.

One aspect that took a hit to make the price lower for the Samsung Odyssey G5 S27AG50 is its connectivity layout. It only includes a slot each for DisplayPort 1.2 and HDMI 2.0, along with a USB 2.0 port for service or firmware updates. There is also a 3.5mm jack, but it doesn’t have speakers like its premium siblings.

The Samsung Odyssey G5 S27AG50 sports a 27-inch flat IPS panel with a 2560 x 1440 resolution, a 165Hz refresh rate, and a 1ms boosted response time. The backlight has a 350 cd/m2 output while the contrast ratio is listed at 1000:1 like most IPS panels. This model doesn’t have HDR certification, but it is compatible with HDR10 signals.

27-inch 1440p monitors are considered the sweet spot in the market since they offer an upgrade in sharpness without a considerable penalty to visibility. Games and movies look crisper while text does not become microscopic and is difficult to read. You’ll notice a difference in your GPU’s output in games if you upgrade to 1440p from 1080p, but it’s not monstrously demanding like 4K displays.

The Samsung Odyssey G5 S27AG50 renders 100% sRGB and 70% DCI-P3 which is sufficient for gaming even if it is not the most vibrant. However, it’s not accurate out of the box since the deltaE average is too high at 3.45. Gamers won’t notice a big difference, but those who have better-performing monitors to compare it with will see the color errors.

Calibrating the Samsung Odyssey G5 S27AG50 showed its IPS panel’s true potential since the dE average was reduced to 0.67. The monitor simply lacks factory calibration, and you can get this level if you have access to a colorimeter. However, it’s not necessary for strictly gaming so we don’t recommend spending another two hundred bucks or so on the gadget unless you are into content creation.

Its backlight reaches an impressive peak brightness of 471 cd/m2 while its contrast goes up to 1125:1 at 50% brightness. However, it is still incapable of deep black luminance just like most IPS panels and it doesn’t do well in HDR. Only the high-end IPS monitors with expensive FALD backlights are better in this regard, so we don’t consider it a fault of the monitor.

Panel uniformity for the Samsung Odyssey G5 S27AG50 is great since there are no considerable backlight leaks on the screen. we didn’t see any clouding issues as well, although there is a slight variance in the backlight’s spread. Take note that this aspect varies wildly between every monitor due to tolerances, so there are better and worse units out there.

The Samsung Odyssey G5 S27AG50 has an excellent pixel response time so it isn’t prone to blurring like its VA counterparts. You only need to use a modest amount of overdrive to limit the persistence and light smudges that happen in select circumstances. The monitor works great for fast-paced games and it is comparable in this regard to its best competitors.

The Samsung Odyssey G5 S27AG50 works with FreeSync and G-Sync Compatibility mode so you won’t be left without VRR. This duality is handy now since the GPU market is highly unstable and prices are high. Input lag sits at 4ms at 165Hz so it’s free from delays or de-synced instances which can ruin your gaming experience.

The Samsung Odyssey G5 S27AG50 is a great pick if you want a fast and smooth QHD gaming monitor. The IPS panel isn’t the most vibrant or accurate, but it can be tweaked to maximize your visual enjoyment. We like the design even if it doesn’t have the CoreSync lighting, but it could use more ports like USB slots for accessories.

The biggest downside of the Samsung Odyssey G5 S27AG50 is its price which is fifty to a hundred more versus its closest competitor. It’s relatively new hence the near MSRP price, but it doesn’t offer anything new over proven options such as the Asus VG27AQL1A. It’s only worth getting at a discount, although it is still a pretty good gaming display if you do decide to buy it.

Search
You are here: Home / Reviews / Samsung Odyssey G5 S27AG50 Review – 165Hz QHD IPS Gaming Monitor
This website uses cookies to improve your experience. We'll assume you're ok with this, but you can opt-out if you wish.Accept Read More
Privacy & Cookies Policy